Music "The working out or development of a subject, e.g., the notes of a scale." [A Dictionary of Musical Terms]

The evolution of a music scale from the fundamental or keynote to and through the higher partials or harmonics. See Progressive Evolution, Overtone Series, Progression

Keely
"The action of the magnetic flow is dual in its evolutions, both attractive and propulsive. The inclination of the plane on which the subtle stream moves, either to the right or to the left, has nothing to do with positive or negative condition. The difference in conditions of what is called, by electricians, positive and negative electricity, is the difference between receptive and propulsive vibrations. They can be right or left receptive, or right or left propulsive. The positive vibrations are the radiating; the negative vibrations are the ones that are attracted toward the neutral centre." [Vibratory Physics - The Connecting Link between Mind and Matter]

"The development of his various discoveries has been one uninterrupted work of evolution, reaching, within the last year, he thinks, the sphere of perfect vibratory sympathy, both theoretically and practically. The proof of this is found in the fact that he now transmits vibrations along a wire, connected at one end with the vibratory machine which is the source of power and at its other end with the engine or cannon, as the case may be, which is operated by such vibratory power. Until recently Keely stored force, as he generated it, in a receiver, and experiments were made by him in the presence of thousands at various times for the purpose of testing the operations of this force, liberated in the presence of the audience and stored up in this small receiver." [KEELYS SECRETS - 1888]

Ramsay
In the above line it will be readily observed that these three chromatic chords, having each of their intervals a minor third, involve, as necessary elements of their build, every one of the twelve semitones at one point or another of the line. This is a second witness to the legitimacy of the chromatic scale of twelve semitones. We have our first witness to the same in the evolution of the semitones progressively in the course of the modulations by which, in growth-like continuity, Nature links the successive keys; whether developed upward, as is the natural way of the majors; or downward, as in the natural way of the minors; or half upward and half downward, which is an expedient in order to simplify the signatures. In whichever direction the modulation is effected, one note is always divided, and must, true to Nature, be signified by placing a sharp or a ♭, as the case may be, to the 4-comma altered interval, and this always leaves a 5-comma interval to occupy the place to which Nature has assigned such interval in the original scale. When this operation has been twelve times performed, we have the chromatic scale of twelve semitones. Thus by two witnesses the thing is established. By further examination of these chromatic chords we find other interesting features beside their witness to the twelve semitones of the octave. [Scientific Basis and Build of Music, page 56]

Cayce
"As man applies the laws of which he becomes conscious, the development of man brings forth those results merited by that knowledge...This we find, then is evolution. Man's development through man's acquiring, man's understanding of spiritual laws, of earthly laws, of God's laws, and applying same." Cayce (900-70)

Dialogue on Awakening
"Evolution by degrees is the perfect description of the supreme achievement of the ego. That keeps you in a constant state of allowing yourself to believe that there is a goal just around the corner as opposed to the recognition that if you are the perfect creation of the Father, what could there be to evolve into except the memory of it and memory is instantaneous." [Dialogue on Awakening] 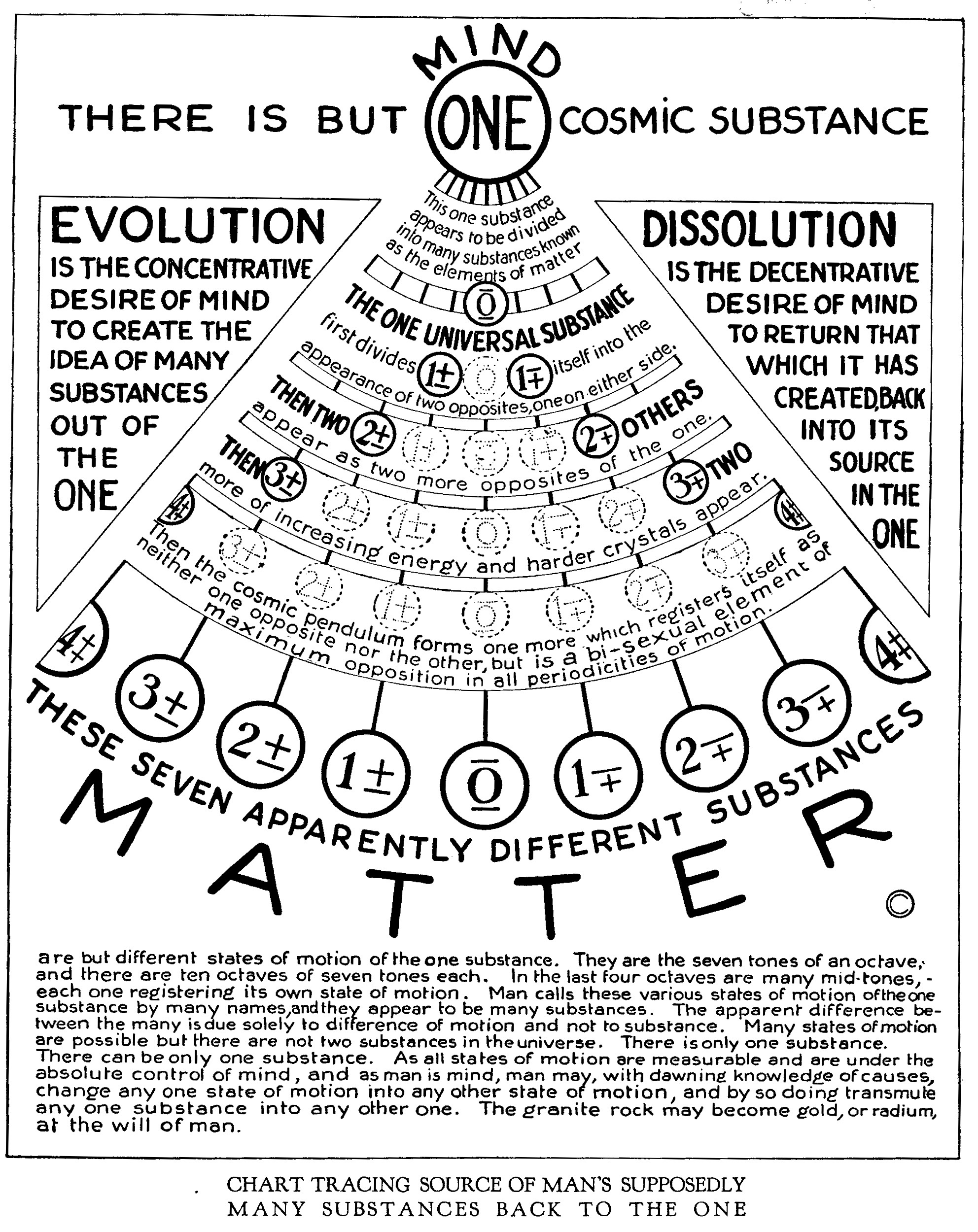 Christ Returns - Speaks His Truth
"To discover your true SOURCE of BEING, I ask you to take stock of the unimaginable and indescribable complexity and diversity of purposeful work plainly evident in penguins and pigs.
Can the human mind replicate any of the most basic of activities within - say - the digestive system, which swiftly summons up the requisite enzymes and hormones necessary for digestion.
How dare the finite mind, which is incapable of perceiving clearly the true creative process governed by instinctual knowledge, presume to state unequivocally - defying contradiction - that it understands the true origins of creation and the forces out of which creation took form? What arrogance! These men can only think according to what their eyes tell them.
I view the present scientific ignorance with loving compassion, a degree of amusement, and a great all consuming passion to puncture their pride. For, until someone can penetrate their self-satisfaction and position of infallibility, a true mating of Eternal Verities and human scientific knowledge can never take place. But it must take place; otherwise human spiritual evolution will remain at a standstill.
The scientific mind is too full of 'finitely' devised book lore, accepted formulas and equations, and the need for their fellows' approval, to permit mystical penetration by Higher Intelligences.
On my behalf, I ask readers of these Letters, to form an association to challenge Science and ask 'at what point in the evolution of the 'material' world' is CONSCIOUSNESS first discernible?" [Christ Returns - Speaks His Truth, Letter 5, page 12]