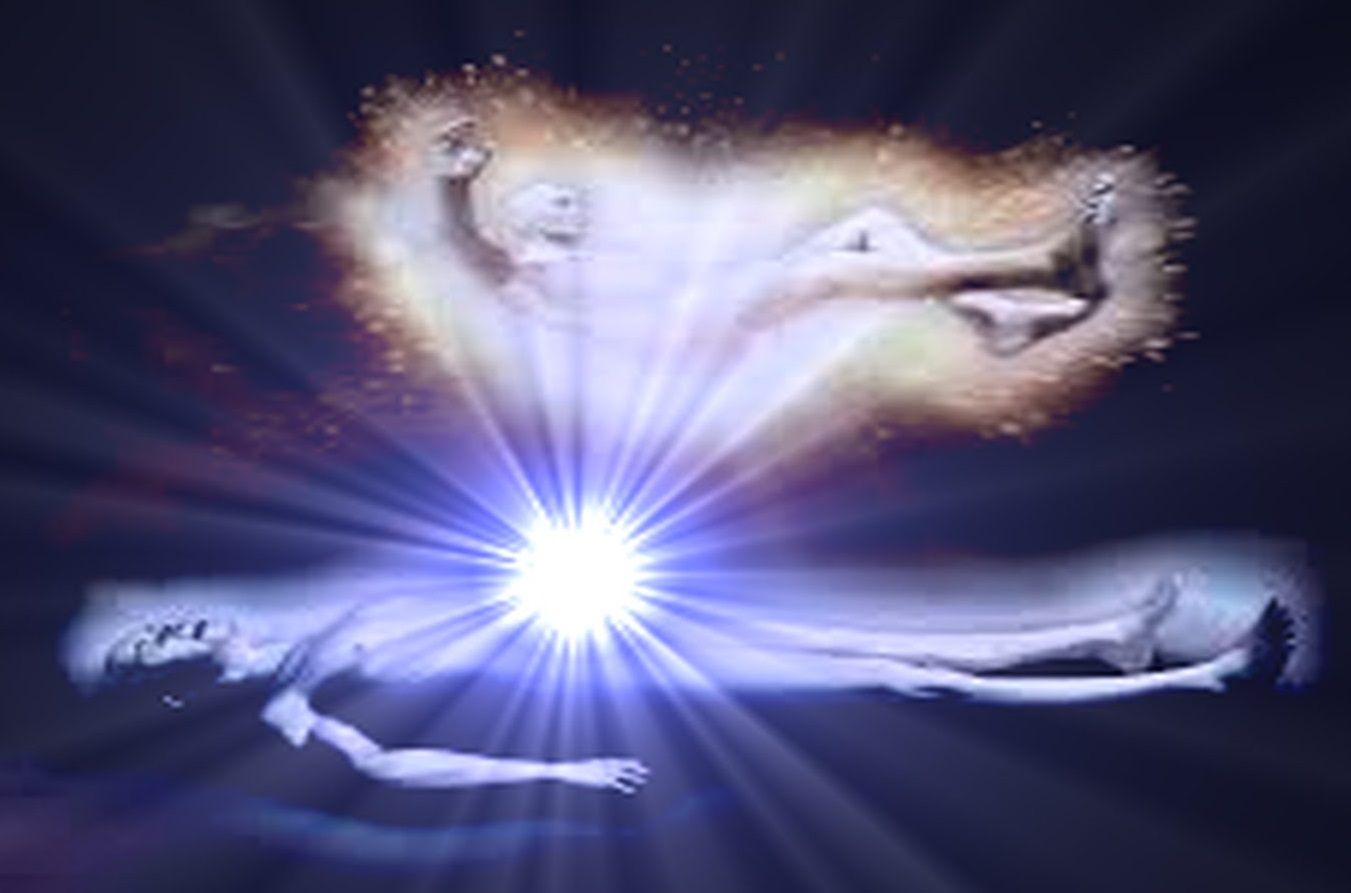 (click to enlarge) In its simplest form death is entropy (dispersion) or that which resists syntropy (good or life nurturing).

Keely
"We have gone far enough to find that there is no such thing as death; that matter cannot die, any more than the substance or spiritual essence which controls it can die. The word death is a misnomer, for there is only a change of base in the molecular visible, and it is the same with the sympathetic invisible, for celestial radiation claims her own back again to its realm of spiritual existence." [Keely, Newton of the Mind]

Russell
"Death does not mean discontinuance, for no idea discontinues. Death means disappearance; just an interval between that and reappearance. This is a repetitive universe of continuing things."[Russell, Genero-Radiative Concept]

"For this reason we again repeat the great simple basic fact that all death is caused by expansion, and all life' is caused by compression. We also repeat the as yet unknown fact that life deeply desires to live, but has to work hard to keep sufficiently charged to maintain life, while death can fulfill its desire to die without effort. To charge a body with life takes time and much effort, but a discharge can be timeless and without effort. The flash of a short circuit is not only a good example of this fact but is a demonstration of its proof. If you will but submit this new thought to your reasoning you will see the naturalness, and significance of it. Death means rest, or cessation of motion. Sound is motion created with an effort, but it ceases without effort. It is an effort for you to arise and work, but it is no effort for you to cease working and rest. It is an effort to heat a rod of iron but the rod will cool without effort. You must, therefore, realize that all things will die normally and naturally without help. That is what radiation is. Multiplied expansion means helping matter to expand quickly, and that is what radioactivity is. The use of nuclear fission, therefore, vastly multiplies the difficulty of living things to keep alive, by vastly aiding them to die." [Atomic Suicide, page 19-20]

"Now look at your chart and find carbon in the fourth octave symbolized by a cube centering a sun. From that point on death begins and multiplies its power to die in the same ratio as it has multiplied its power to live. In other words, it now accumulates as much centrifugal speed to disappear into its invisible Source as it accumulated centripetal speed on the way to its destination in carbon. The only difference is that the genero-active speed of compression is inward from the outside until maturity in carbon, and after that its radio-active speed explodes outward from the inside. In each case the inward speed of 186,400 miles per second is reached at the maximum point of life in carbon, and the outward speed is reached at the amplitude of the 9th octave, just beyond the transuranium elements, which is the maximum point of universal death." [Atomic Suicide, page 34-35]

"Man has always thought of his periodic entrance into mortality as an entrance of his Person - his being - his individuality, into life. And he has always thought of his body exit into his eternally living Self, as death. That is the thought which has always been man's great enemy. That thought of death shall be destroyed by knowing that there is no death in Nature to destroy. There is naught but eternal life in all this universe. There is naught but Mind at rest, and Mind-thinking in motion, in all Creation. Such a concept must gradually change as unfolding intelligence in man gives him higher knowledge of REALITY rather than its loyally believed in simulation, which motion produces." [Atomic Suicide, page 234]

"Life is but the inward flow of MY thinking's divided pulsing, and death is its outward flow. [Atomic Suicide, page 235]

"In the Cosmic sense reincarnation and repetition mean the same thing, for Nature is eternal, it is endless and beginningless. The idea of death - or of identity - or of being killed - is a conclusion of the senses of bodies. Such a thought is impossible for the knowing Mind of the Cosmic mystic." [Atomic Suicide, page 246]

Christ Returns - Speaks His Truth
"I was shown the following vivid vision. First of all, I saw a new-born babe as 'light', a life-form of 'Creative Power'. As the baby grew into childhood, then manhood, I saw the pure LIGHT of the 'Creative Power' gradually dimmed and then obscured altogether in him, by a dense wrapping of chains and thongs. I questioned the meaning of the vision and there came to my mind a clear understanding which may be expressed in the following words: 'From birth to death - people believe and insist that their five senses of sight, hearing, touch, smell and taste, correctly predicate the 'reality' of themselves and the universe around them. Therefore, because they draw their mind power direct from Divine 'Creative Power', it is done to them according to their beliefs. [Christ Returns - Speaks His Truth, Letter 1, page 17]

Cayce
"It (death) is not the end, then, because we pass from one room to another, from one consciousness to another. For, so is it proclaimed in that promise. Though we live in the physical consciousness, we pass - as this entity has oft - into those consciousnesses of Venus, Mercury, Jupiter, Uranus; for these are but stepping stones to the greater consciousness which He would have each soul attain in its relationships with and usage of its fellow men." [Cayce 2282-1]

"Death in the material plane is passing through the outer door into a consciousness in the material activities that partakes of what the entity, or soul, has done with its spiritual truth in its manifestations in the other sphere." [Cayce 5749-3]

"When the soul departs from a body - (this is not being spoken of the Christ) - it has all the form of the body from which it has passed - yet it is not visible to the carnal mind, unless that mind has been and is, attuned to the infinite. Then it appears, in the infinite, as that which may be handled, with all the attributes of the physical being; with the appetites, until these have been accorded to a unit of activity with the Universal Consciousness." [Cayce (2533-8)]

"Nothing grows, nothing remains alone unless dead. A mind, a body that sits alone and considers the outside and never turning that within to the out, nor that without from within, soon finds drosses setting up in the system; for development is change. Change is the activity of knowledge from within. Learn to live! Then there is no death, save the transition, when desired." [Cayce (900-465)]

"For there is no death when the ENTITY or the real self is considered; only the change in the consciousness ... in the sphere of activity in which the entity finds self." [Cayce (2147-1)]

"For, as has been given, it is not all of life to live, nor yet all of death to die. For life and death are one, and only those who will consider the experience as one may come to understand or comprehend what peace indeed means." [Cayce (1977-1)]

"That each entity must and will some day attain to the ability to be conscious of physical Death without the physical suffering is true, but the day - to most, is far, too far away." [Cayce (993-7)]

(Q) "Does Death instantly end all feeling in the physical body? If not, how long can it feel?" (A) "This would be such a problem; dependent upon the character of which unconsciousness is produced to the physical reaction - or the manner in which the consciousness has been trained. Death - as commonly spoken of - is only passing through God's other door. That there is continued consciousness is evidenced, ever, by the associations of influences, the abilities of entities to project or to make those impressions upon the consciousness of sensitives or the like. As to how long - many an individual has remained in that called Death for what ye call YEARS without realizing it was dead! The feelings, the desires for what ye call appetites are changed, or not aware at all. The ability to communicate is that which usually disturbs or worries others. Then, as to say how long - that depends upon the entity. For as has been given, the psychic forces of an entity are CONSTANTLY active - whether the Soul-entity is aware of same or not. Hence as has been the experience of many, these become as individual as individualities or personalities are themselves." [Cayce (1472-2)]

No! When fear comes, watch it.

Be face to face with it.

Look deep into it.

Gaze into the valley of fear.

Of course you will perspire, and you will tremble, and it will be like a death, and you will have to live it many times. But by and by, the more your eyes become clear, the more your awareness becomes alert, the more your focus is there on the fear, the fear will disappear like a mist. And once fear disappears, sometimes, even for only a moment, suddenly you are deathless.

There is no death.

For even a single moment, if you can see that you are deathless.

Then no meditation is needed.

Much is being missed because of fear.

We are too attached to the body and we go on creating more and more fear because of that attachment.

You are not the body; you are the bodiless.

Remember it. Realize it.

Awaken yourself to this truth - that you are beyond the body. You are the witness, the seer.

Then death disappears and fear disappears, and there arises the tremendously glorious life - what Jesus calls 'life abundant,' or 'the kingdom of God.'

The kingdom of God is within you.
OSHO
From Ancient Music in the Pines Chapter #5

Quimby
“Life is wisdom; death is belief. To be in wisdom is to be in health, happiness and eternal life; to be in belief, is to be in error, disease, and death. It was belief that Jesus sought to destroy by bringing life and immortality to light in the Gospel; and that life was Christ.” [Phineas Parkhurst Quimby, Life and Death are Opposite States of Existence]

“I have said before that man dissolves and passes into space, carrying with him all his knowledge, but as he never has attached his life to wisdom, he only knows himself in matter. Therefore he lives in matter, and this is the belief of nine-tenths of mankind. Jesus tried to introduce a proof that man exists outside of his belief and I have learned the evidence he had of this truth. It is this. Man including his senses, sight, taste, etc., and his wisdom is not of matter nor has he the qualities of matter. Pagan philosophy and religion made them a part of matter and the belief in the transmigration of souls, which is akin to modern spiritualism, observed the more intelligent belief in progression.” [Phineas Parkhurst Quimby, Article: Illustrating the Word “Mind”, Printed Page: 317]

"The dead can no longer complain, and the living divide the spoils. Human life is not very valuable these days; and, if we do not value the sur­vival of others, we cannot expect much consideration for our own survival." [Manly Palmer Hall (PRS Journal Spring 1990 p. 8)]