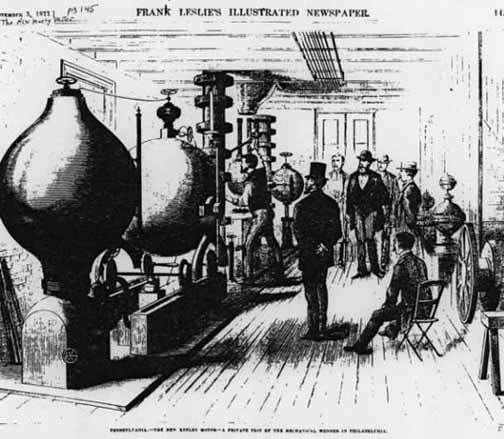 
The device pictured above is one of Keely's original unsophisticated etheric generators. Today we might call this a plasma generator. His generator was not the same as his Liberator apparently a different device. They are not the same because we find both terms used in one sentence:

Keely
"After a succession of interesting but laborious experiments, he produced in March 1885, what he termed a liberator, which could be operated in conjunction with the generator, and was a vast stride in advance of anything accomplished hitherto." [Keelys Change of Base]

"With his Generator, which was invented for the purpose of multiplication of vibrations, he secured higher frequencies by disturbance of equilibrium of mediums of different specific gravities, air as one, water as the other." [VIBRATORY MULTIPLICATION]

"He has again reduced in size the instrument producing the force. From 1882 to 1884 the "Generator" was six feet long and corresponding wide and high, but failing to make the arrangement automatic upon which its mechanical usefulness depended, Keely found a new standard for research in an experiment often made by himself, but never before successful, which resulted in invention in 1885 of the "Liberator" not so large as a lady's small round worktable. He made astonishing progress with this beautiful piece of vibratory mechanism, so as to combine the production of the power, operation of the cannon, his engine and his disintegrator in a machine no larger than a dinner plate and only three or four inches in thickness. This was completed in 1886, up to which time his experiments were upon the principle of sympathetic vibration, for liberating a vapory or etheric product. His later experiments were another modification of vibratory sympathy, and the size of the instrument used now, 1888, for the same purposes is no larger than an old fashioned silver watch. A pressure of 30,000 lbs. to the square inch in raising of the lever, and all other operations, without one ounce of pressure in any part of the apparatus, are effected by the ether. The force is transmitted along a wire of platinum and silver. Keely has named this new modification "Negative Attraction." The two forms of force with which he has experimented and the attendant phenomena, are exactly antithetical. It is by changing the vibrations of the cosmic ether that Keely releases this energy. Dr. Dupuy, of New York, experimented along these lines for many years, but without success to the degree Keely had." [KEELYS SECRETS - 1888] [underline added]

"Keely's difficulties with his old generator of etheric force grew out of the fact, in part, that the vaporic power produced was so humid that he could not, in utilizing it, obtain its theoretical value in work. He has overcome this entirely [?] by dispensing with water and has attained a success beyond that which he originally anticipated when he abandoned his original line of experiment. (He was obliged to return soon to his former method, for he found a difficulty even more obstinate to contend with.)" [KEELYS SECRETS - 1888]

"The vapor produced from the Liberator was free of all humidity, of greater tenuity, giving perfect and high lines of action. Its plan was conceived during his desperate struggle to effect a simultaneous action between the molecular and atomic leads, necessary for continuation of energy release and was suggested by the saying "Nature works with dual force, but at rest she is a unit." [MECHANICAL INVENTIONS AND INSTRUMENTS]

Electric Generator
Keely
"In electric lighting, the velocity of the dynamos accumulates only the harmonic current - by atomic and interatomic conflict - transferring one-two hundred thousandth (1/200,000) of the light that the dominant current would give, if it were possible to construct a device whereby it could be concentrated and dispersed." [Snell Manuscript]

"''A dynamo-electric machine is placed at any given spot; its object, being put in action, is to withdraw from the earth its neutral electricity, to decompose it into its two conditions and to collect, upon accumulators, the electricity thus separated. As soon as the accumulators are charged, the electricity is disposable; that is, our lamps can be lighted." [Vibratory Physics - The Connecting Link between Mind and Matter]