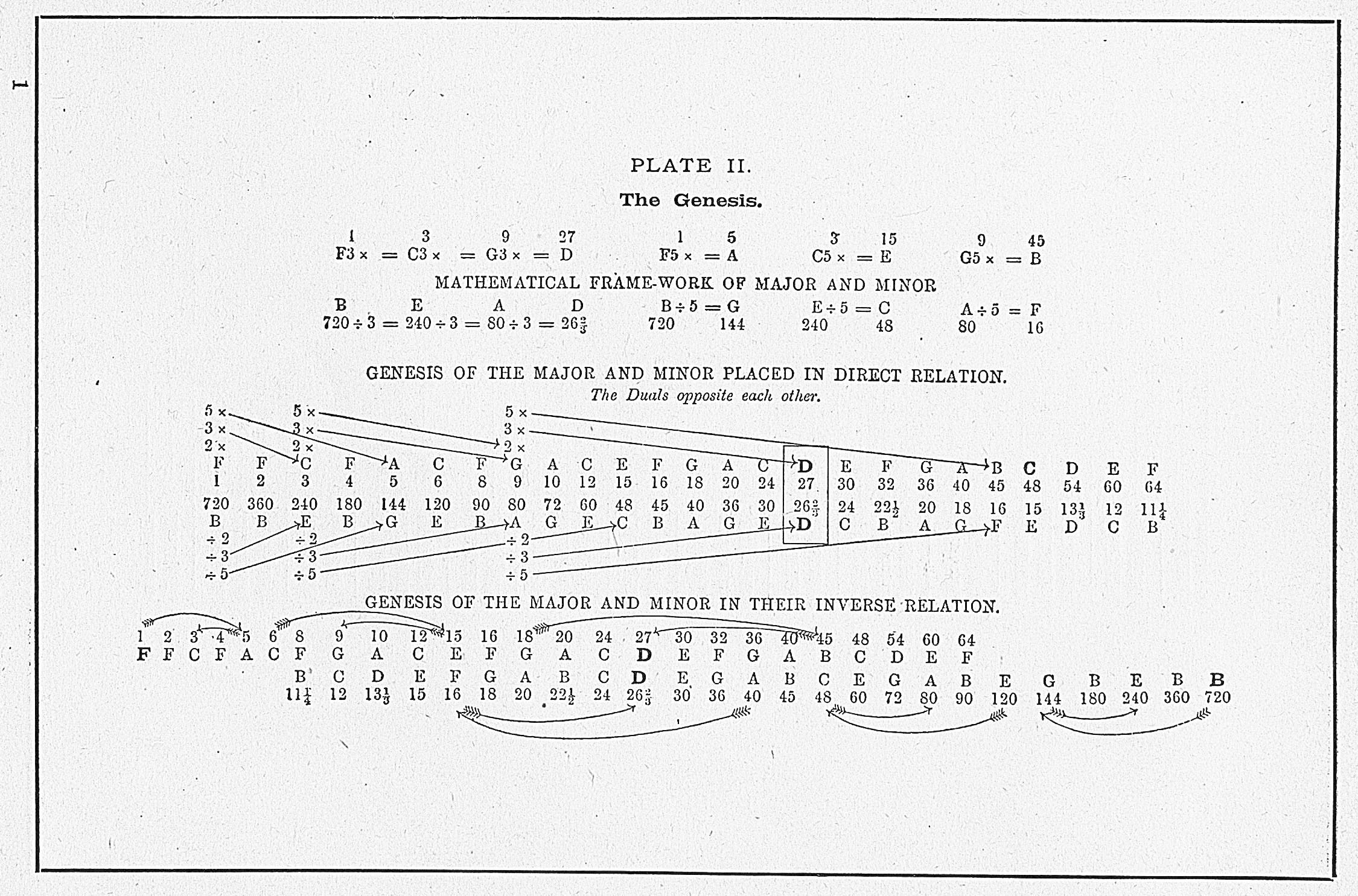 
In Fig. 1, the mathematical framework of the scales major and minor, is shown the genesis of the scale. F1, in the top figure, is multiplied by 3, and that by 3, and that by 3, which brings us to D27, top of the major dominant. F1 is the root of the whole system. C3 is the top of the first chord, and from that grows the next, and from that the next; and so we have F, C, G, and D, the tops and roots of the major system of chords. When these 3 roots are each multiplied once by 5, the middles of the chords are found, as shown - A, E, and B; so B is the last-born of the major family. When B is taken 4 octaves higher at the number 720 and divided by 3, and that by 3, and that by 3, we get the notes E, A, and D, which are the roots and tops of the minor system of chords. Dividing B, E, and A each by 5 once, we get the middles of the 3 minor chords, as shown. [Scientific Basis and Build of Music, page 103]

PLATE XXII.
THE MATHEMATICAL TABLE OF THE TWELVE MAJOR SCALES AND THEIR RELATIVE MINORS.


This is a twofold mathematical table of the masculine and feminine modes of the twelve scales, the so-called major and relative minor. The minor is set a minor third below the major in every pair, so that the figures in which they are the same may be beside each other; and in this arrangement, in the fourth column in which the figures of the major second stand over the minor fourth, is shown in each pair the sexual note, the minor being always a comma lower than the major. An index finger points to this distinctive note. The note, however, which is here seen as the distinction of the feminine mode, is found in the sixth of the preceding masculine scale in every case, except in the first, where the note is D26 2/3. D is the Fourth of the octave scale of A minor, and the Second of the octave scale of C major. It is only on this note that the two modes differ; the major Second and the minor Fourth are the sexual notes in which each is itself, and not the other. Down this column of seconds and fourths will be seen this sexual distinction through all the twelve scales, they being in this table wholly developed upward by sharps. The minor is always left this comma behind by the comma-advance of the major. The major A in the key of C is 40, but in the key of G it has been advanced to 40 1/2; while in the key of E, this relative minor to G, the A is still 40, a comma lower, and thus it is all the way through the relative scales. This note is found by her own downward genesis from B, the top of the feminine dominant. But it will be remembered that this same B is the middle of the dominant of the masculine, and so the whole feminine mode is seen to be not a terminal, but a lateral outgrowth from the masculine. Compare Plate II., where the whole twofold yet continuous genesis is seen. The mathematical numbers in which the vibration-ratios are expressed are not those of concert pitch, but those in which they appear in the genesis of the scale which begins from F1, for the sake of having the simplest expression of numbers; and it is this series of numbers which is used, for the most part, in this work. It must not be supposed, however, by the young student that there is any necessity for this arrangement. The unit from which to begin may be any number; it may, if he chooses, be the concert-pitch-number of F. But let him take good heed that when he has decided what his unit will be there is no more coming and going, no more choosing by him; Nature comes in [Scientific Basis and Build of Music, page 117]