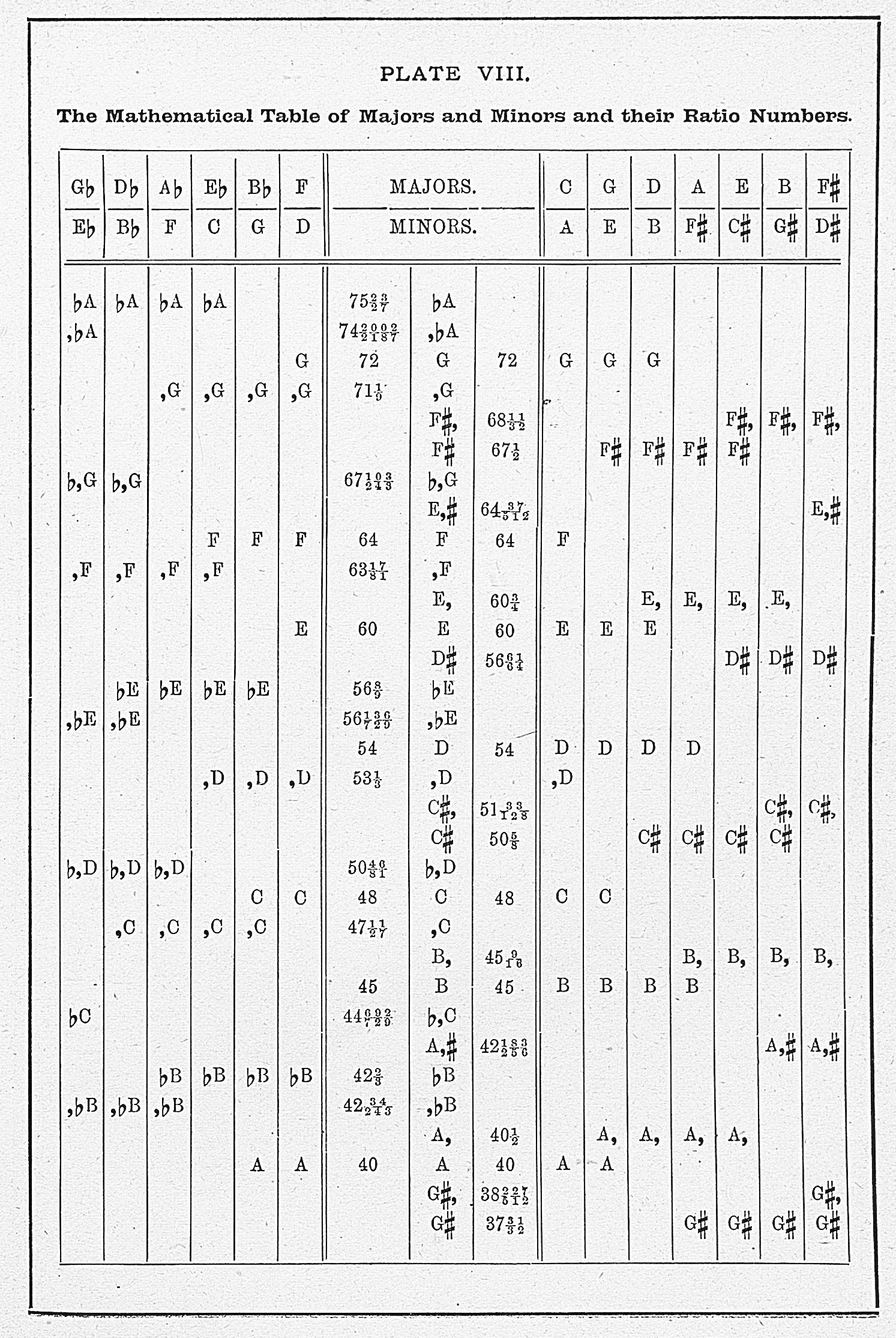 
page 132
<- GO PREVIOUS PLATE| GO NEXT PLATE ->
[RETURN to Scientific Basis and Build of Music]
PLATE VIII.
THE MATHEMATICAL TABLE OF THE MAJORS AND MINORS
WITH THEIR RATIO NUMBERS.


In the center column are the notes, named; with the lesser and larger steps of their mathematical evolution marked with commas, sharps, and flats; the comma and flat of the descending evolution placed to the left; the comma and sharp of the ascending evolution to the right; and in both cases as they arise. If a note is first altered by a comma, this mark is placed next to the letter; if first altered by a sharp or flat, these marks are placed next the letter. It will be observed that the sharpened note is always higher a little than the note above it when flattened; A# is higher than ♭B; and B is higher than ♭C, etc.; thus it is all through the scales; and probably it is also so with a fine voice guided by a true ear; for the natural tendency of sharpened notes is upward, and that of flattened notes downward; the degree of such difference is so small, however, that there has been difference of opinion as to whether the sharp and ♭ have a space between them, or whether they overlap, as we have shown they do. In tempered instruments with fixed keys the small disparity is ignored, and one key serves for both. In the double columns right and left of the notes are their mathematical numbers as they arise in the Genesis of the scales. In the seven columns right of the one number-column, and in the six on the left of the other, are the 12 major and their 12 relative minor scales, so arranged that the mathematical number of their notes is always standing in file with their notes. D in A minor is seen as 53 1/3, while the D of C major is 54; this is the comma of difference in the primitive Genesis, and establishes the sexual distinction of major and minor all through. The fourth of the minor is always a comma lower than the second of the major, though having the same name; this note in the development of the scales by flats drops in the minor a comma below the major, and in the development of the scales by sharps ascends in the major a comma above the minor. In the head of the plate the key-notes of the 12 majors, and under them those of their relative minors, are placed over the respective scales extended below. This plate will afford a good deal of teaching to a careful student; and none will readily fail to see beautiful indications of the deep-seated Duality of Major and Minor. [Scientific Basis and Build of Music, Ramsay - The sharp and the flat between two notes overlap]


The curved lines enclose the three chords of the major mode of the scale, with the ratio-numbers for the vibration in their simplest expression, counted, in the usual way in this work, from F1, the root of the major subdominant. The chords stand in their genetic position of F F C A, that is F1 by 2, 3, and 5; and so with the other two. The proportions for a set of ten pendulums are then placed in file with the ten notes from 1 to 1/2025 part of 1. Of course the one may be any length to begin with, but the proportions rule the scale after that. [Scientific Basis and Build of Music, page 121]