A series of notes forming a major or minor scale; tonality; also, the levers on a keyboard instrument. 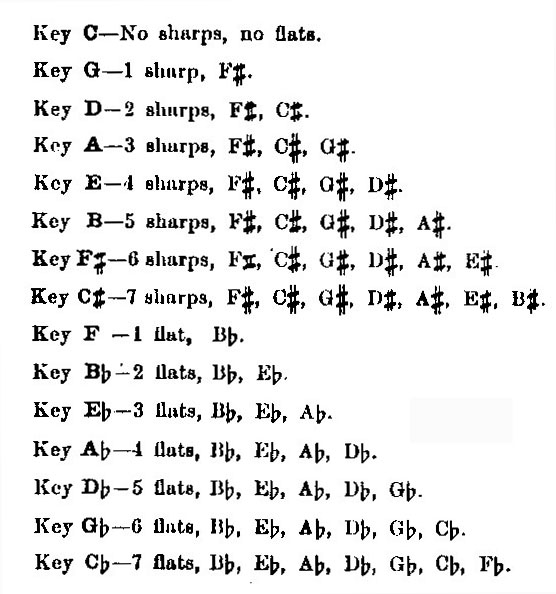 (1) A mechanical contrivance for closing or opening ventages, as in flutes, clarinets, ophicleides, etc. By means of keys on such instruments, apertures too remote to be reached by the outstretched fingers are brought under control of the player.
(2) A lever which brings the pallets of an organ under the control of the hand or foot of an organist.
(3) A lever which controls the striking apparatus of a key-stringed instrument. In the harpsichord it acted on the jack, in the pianoforte it acts on the hammer.
(4) The wrest or key used for tuning instruments having metal pegs. Its end is hollowed out, so as to fit over the four-sided end of the peg, and the crossbar with which it is surmounted gives leverage to the hand of the tuner, so that he is enabled to tighten or loosen a string, or (in the case of a drum) slacken or strain a parchment.
(5) The sign placed at the commencement of the musical stave which shows the pitch of the notes, was originally called a clavis or key. This sign is called in modern music a clef.
(6) Key, in its modern sense, is the starting point of the definite series of sounds which form the recognised scale. Different starting points require the relative proportion of the steps of the scale to be maintained by means of sharps or flats in the signature. The key of C requires no flats or sharps for this purpose, hence it is called normal (diatonic) key. [Stainer, John; Barrett, W.A.; A Dictionary of Musical Terms; Novello, Ewer and Co., London, pre-1900]

"The third note of the octave scale, E, the center of the tonic chord in the key of C, is the center of the system. It is the note which has the least tendency either upward or downward, and it has immediately above it in the octave scale the note which has the greatest amount of specific gravity, F, the root of the major subdominant; and immediately beneath it the note which has the greatest amount of specific levity, D, the top of the major dominant. Thus the root of the subdominant chord and the top of the dominant are placed right above and below the center of the system, and the gravity of the one above, and the levity of the one below, causes each of them to move in the direction of the center. These tendencies are seen in the scale at whatever key it may be pitched, and by whatever names the notes may be called. And it is on account of this permanency of character of the notes that the third note of the scale, E, in the key of C, has a lower effect1 than the second, D; and that the fourth note, F, has a lower effect than either the first, second, or third; the fifth note, G, has a higher effect than the fourth, F; but the sixth, A, has a.." [Scientific Basis and Build of Music, page 28]

of twelve mathematical scales is that F# and G♭, which in the tempered system are one, being counted the same, are made two scales in the mathematical; but it is a needless nicety. Twelve is the natural number and period for both mathematical and tempered scales. And as the system of twelve Fifths contains the key system of music four times, only three of these twelve Fifths being required for any one key, it follows that the tempered key is affected by only one-fourth part of the small amount to be tempered into the whole twelve. [scientific Basis and Build of Music, page 30]

In order to find the notes for the next major key above C, we have to multiply the vibration-number of D, which is the top of the dominant C, by 3 and 5. It is out of the key of C at this point that the new key sprouts and grows, and by the primes and method which produce the key of C itself. So if we would find the relative minor of C, let us take the note which is a minor third below D - that is, B - to produce the minor. The minor sprouts and grows from this point of the key of C; for the relative minor grows out of the major, as out of the man at first the woman is taken. Moreover, B is the last-born of the notes for the major scale; for the middles, that is, the thirds of chords, are always produced by the prime 5; and the tops, that is, the fifths of chords, are produced by the prime 3, and are born before the thirds, though placed after them in the chords. Well, because B is the last-born note of the major, as well as a minor third below the top of the highest chord of the major, it seems that the minor should have this for its point of departure. Again, we have seen that the major and the minor are found in their strings and their vibrations by an inverse process, that one going back upon the other; and, there taking Nature's clue, let us proceed by an inverse process of generating the minor. Making B45 our unit, as F1 was our unit for the major, let us divide by 3 and 5 for a root and middle to B, as we multiplied by 3 and 5 for a top and middle to F. B45 divided by 3 is 15; here then is our E, the root of the chord, just where we had found it coming upward; for, remember, we found E15 by multiplying C3 by 5. This E, then, is the same in major and minor. Now B45 divided by 5 is 9; [Scientific Basis and Build of Music, page 31]

The major scale is composed of three fifths with their middle notes, that is to say, their thirds. And as three such fifths are two octaves, less the small minor third D to F, taking the scale of C for example, so these three fifths are not joined in a circle, but the top of the dominant and the root of the subdominant are standing apart this much, that is, this minor third, D, e, F. Had they been joined, the key would have been a motionless system, with no compound chords, and no opening for modulation into other keys. [Scientific Basis and Build of Music, page 38]

GRAVITY - The downward effect, to the ear, of a sound in a key. [Scientific Basis and Build of Music, page 40]

LEVITY - The upward effect, to the ear, of a sound in a key. [Scientific Basis and Build of Music, page 40]

It is according to the Law of Duality that the keys on the piano have the same order above and below D, and above and below G# and A♭, which is one note. In these two places the dual notes are given by the same key; but in every other case in which the notes are dual, the order above the one and below the other is the same. The black keys conform to the scale, and the fingering conforms to the black keys. On that account in the major scale with flats, for the right hand the thumb is always on F and C; and as the duals of F and C are B and E in the minor scale with sharps, for the left hand thumb is always on B and E. [Scientific Basis and Build of Music, page 44]

that Nature has done so.1 And in every new key into which we modulate Nature performs the same operation, till in the course of the twelve scales she has cut every greater note into two, and made the notes of the scale into twelve instead of seven. These we, as a matter of convenience, call semitones; though they are really as much tones as are the small intervals which Nature gave us in the genesis of the first scale between B-C and E-F. She only repeats the operation for every new key which she had performed at the very first. It is a new key, indeed, but exactly like the first. The 5 and 9 commas interval between E and G becomes a 9 and 5 comma interval; and this Nature does by the rule which rests in the ear, and is uttered in the obedient voice, and not by any mathematical authority from without. She cuts the 9-comma step F to G into two, and leaving 5 commas as the last interval of the new key of G, precisely as she had made 5 commas between B and C as the last interval of the key of C, she adds the other 4 commas to the 5-comma step E to F, which makes this second-last step a 9-comma step, precisely as she had made it in the key of C.2 [Scientific Basis and Build of Music, page 48]

Key Note
"The note which, according to the signature, forms the starting point of the scale. The tonic. The do." [Stainer, John; Barrett, W.A.; A Dictionary of Musical Terms; Novello, Ewer and Co., London, pre-1900]

"Music, pure, natural, and harmonical, in the true and evident sense of the term, is the division of any keynote, or starting-point, into it's integral and ultimate parts, and the descending divisions will always answer to the ascending, having reference to the general whole. The essence and mystery in the development of harmonies consists in the fact that every keynote, or unit, is a nucleus including the past, the present, and the future, having in itself an inherent power, with a tendency to expand and contract. In the natural system, as each series rises, its contents expand and fall back to the original limit from any point ascending or descending; we cannot perceive finality in any ultimate; every tone is related to higher and lower tones; and must be part of an organized whole." - F. J. Hughes, Harmonies of Tones and Colours - Developed by Evolution, page 16


Progression of Keys
Key Signature
Sharps or flats placed at the beginning of a composition to indicate its key.