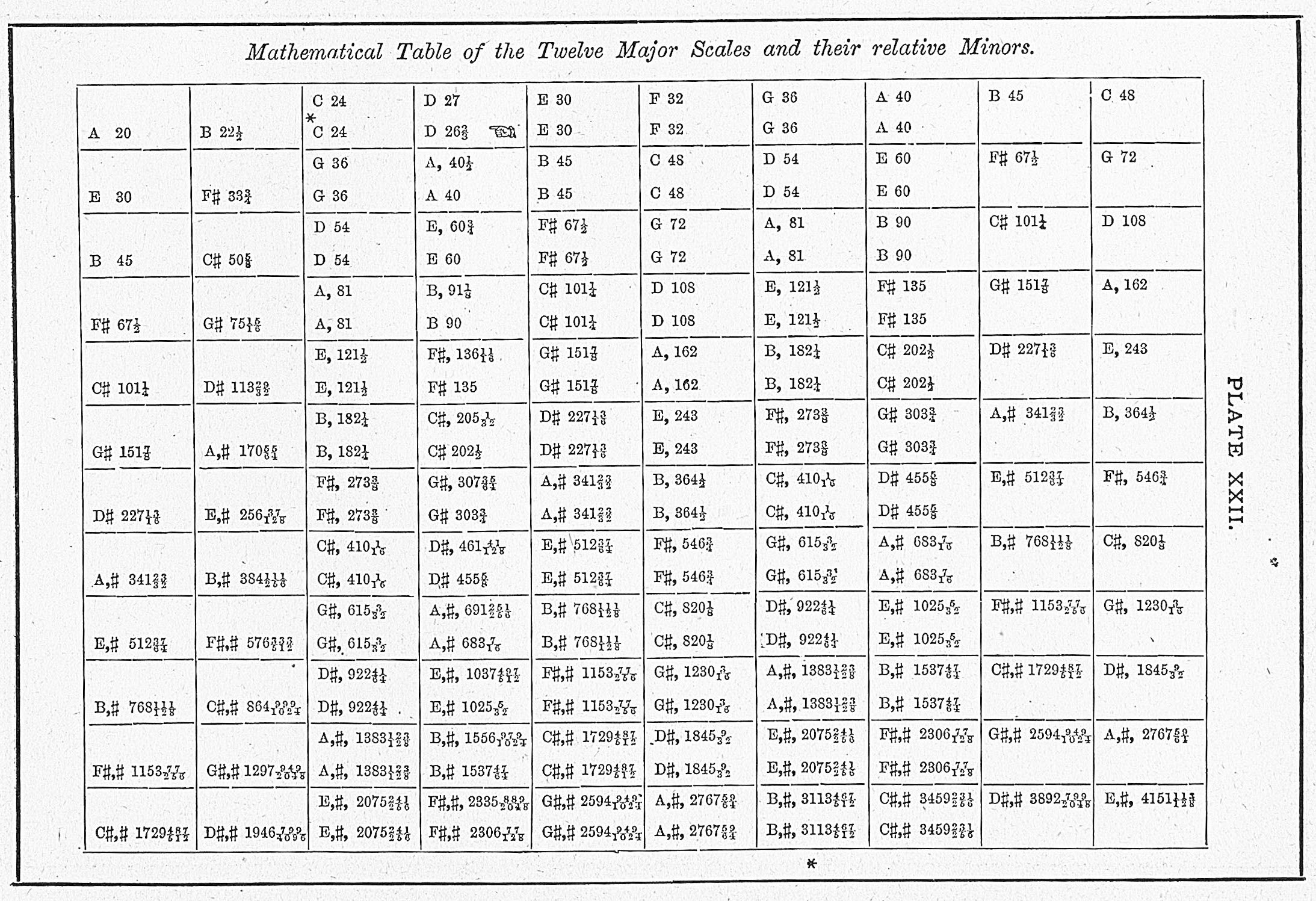 
page 146
<- GO PREVIOUS PLATE|GO NEXT PLATE ->
[RETURN to Scientific Basis and Build of Music]
PLATE XXII.
THE MATHEMATICAL TABLE OF THE TWELVE MAJOR SCALES AND THEIR RELATIVE MINORS.


This is a twofold mathematical table of the masculine and feminine modes of the twelve scales, the so-called major and relative minor. The minor is set a minor third below the major in every pair, so that the figures in which they are the same may be beside each other; and in this arrangement, in the fourth column in which the figures of the major second stand over the minor fourth, is shown in each pair the sexual note, the minor being always a comma lower than the major. An index finger points to this distinctive note. The note, however, which is here seen as the distinction of the feminine mode, is found in the sixth of the preceding masculine scale in every case, except in the first, where the note is D26 2/3. D is the Fourth of the octave scale of A minor, and the Second of the octave scale of C major. It is only on this note that the two modes differ; the major Second and the minor Fourth are the sexual notes in which each is itself, and not the other. Down this column of seconds and fourths will be seen this sexual distinction through all the twelve scales, they being in this table wholly developed upward by sharps. The minor is always left this comma behind by the comma-advance of the major. The major A in the key of C is 40, but in the key of G it has been advanced to 40 1/2; while in the key of E, this relative minor to G, the A is still 40, a comma lower, and thus it is all the way through the relative scales. This note is found by her own downward genesis from B, the top of the feminine dominant. But it will be remembered that this same B is the middle of the dominant of the masculine, and so the whole feminine mode is seen to be not a terminal, but a lateral outgrowth from the masculine. Compare Plate II., where the whole twofold yet continuous genesis is seen. The mathematical numbers in which the vibration-ratios are expressed are not those of concert pitch, but those in which they appear in the genesis of the scale which begins from F1, for the sake of having the simplest expression of numbers; and it is this series of numbers which is used, for the most part, in this work. It must not be supposed, however, by the young student that there is any necessity for this arrangement. The unit from which to begin may be any number; it may, if he chooses, be the concert-pitch-number of F. But let him take good heed that when he has decided what his unit will be there is no more coming and going, no more choosing by him; Nature comes in [Scientific Basis and Build of Music, page 117]

with her irrevocable proportions to measure his scales for him. The stars at the C of the first scale and at the B# of the last show the coincidence of 12 fifths and 7 octaves. The number of B# is 3113 467/512; C24 multiplied 7 times by 2 brings us to the number 3072; these two notes in the tempered system are made one, and the unbroken horizon of the musical world of twelve twofold keys is created. The very small difference between these two pitches is so distributed in the 12 tempered scales that no single key of the 12 has much to bear in the loss of perfect intonation. [Scientific Basis and Build of Music, page 118]

PLATE VIII.
THE THE MATHEMATICAL TABLE OF THE MAJORS AND MINORS
WITH THEIR RATIO NUMBERS.


In the center column are the notes, named; with the lesser and larger steps of their mathematical evolution marked with commas, sharps, and flats; the comma and flat of the descending evolution placed to the left; the comma and sharp of the ascending evolution to the right; and in both cases as they arise. If a note is first altered by a comma, this mark is placed next to the letter; if first altered by a sharp or flat, these marks are placed next the letter. It will be observed that the sharpened note is always higher a little than the note above it when flattened; A# is higher than ♭B; and B is higher than ♭C, etc.; thus it is all through the scales; and probably it is also so with a fine voice guided by a true ear; for the natural tendency of sharpened notes is upward, and that of flattened notes downward; the degree of such difference is so small, however, that there has been difference of opinion as to whether the # and ♭ have a space between them, or whether they overlap, as we have shown they do. In tempered instruments with fixed keys the small disparity is ignored, and one key serves for both. In the double columns right and left of the notes are their mathematical numbers as they arise in the Genesis of the scales. In the seven columns right of the one number-column, and in the six on the left of the other, are the 12 major and their 12 relative minor scales, so arranged that the mathematical number of their notes is always standing in file with their notes. D in A minor is seen as 53 1/3, while the D of C major is 54; this is the comma of difference in the primitive Genesis, and establishes the sexual distinction of major and minor all through. The fourth of the minor is always a comma lower than the second of the major, though having the same name; this note in the development of the scales by flats drops in the minor a comma below the major, and in the development of the scales by sharps ascends in the major a comma above the minor. In the head of the plate the key-notes of the 12 majors, and under them those of their relative minors, are placed over the respective scales extended below. This plate will afford a good deal of teaching to a careful student; and none will readily fail to see beautiful indications of the deep-seated Duality of Major and Minor. [Scientific Basis and Build of Music, page 109]


This diagram shows pictorially the open in the spiral of the mathematical scales, in which, if written in sharps only, B# is seen a little, that is, a comma and the apotome minor, in advance of C, and as the first scale of the new cycle; for it is a violation of Nature's beautiful steps to call it a thirteenth scale of this order, since every scale in the order is 31 commas in advance of the preceding, whereas B# is only one comma and a small fraction in advance of C. If the scales be written in ♭s and #s for convenience of signature, then G# is seen a comma and apotome in advance of A♭; while the whole circle of keys advancing by fifths are each 31 commas in advance of the preceding. We may therefore cast utterly from us the idea of there being more than twelve mathematical scales, and view the so-called thirteenth as simply the first of a new round of the endless spiral of scales. There is, however, in this note a banner with the strange device, "Excelsior," for it leads us onward into ever-advancing regions of vibrations, and would at last bring us to the ultimate and invisible dynamic structure of the visible world. The tempered system of 12 keys, as in Fig. 1, is by causing the G# and A♭ to coalesce and be one, as the two D's are already literally one by Nature's own doing. [Scientific Basis and Build of Music, page 118]