Ramsay - PLATE XIII - The Vertebral Column of the Musical Scale 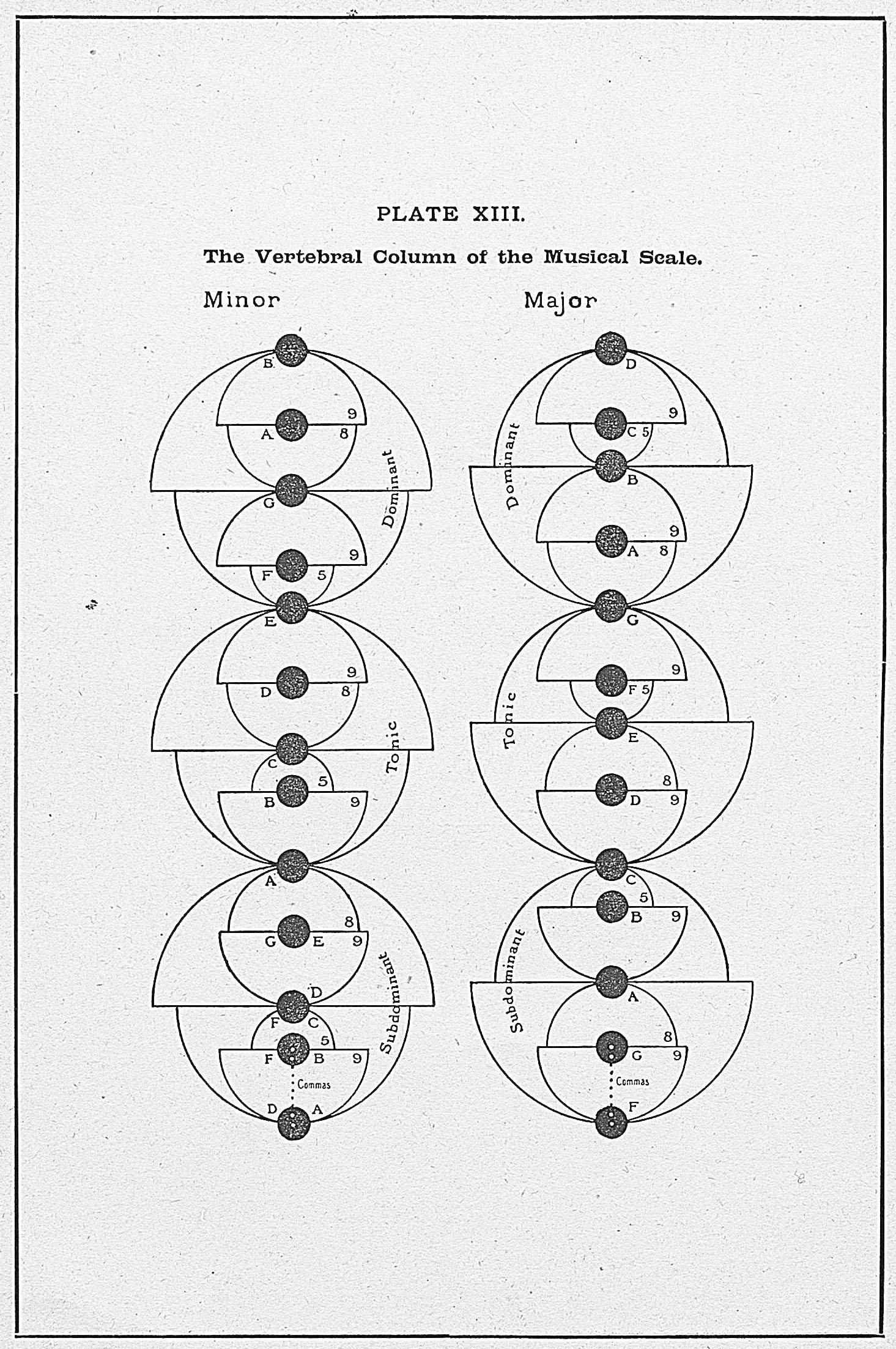 
The Octave being divided into 53 commas, the intervals are measured, as usual, by these, the large second having 9-commas, the medium second having 8, and the small second 5. These measures are then made each the radius by which to draw hemispheres showing the various and comparative areas of the seconds. The comparative areas of the thirds are shown by the hemispheres of the seconds which compose them facing each other in pairs. The comma-measures of the various thirds thus determined are then made the radii by which to draw the two hemispheres of the fifths. The areas of the three fifths are identical, as also the attitudes of their unequal hemispheres. The attitude of the six thirds, on the other hand, in their two kinds, being reversed in the upper and under halves of the scale, their attitude gives them the appearance of being attracted towards the center of the tonic; while the attitude of the three fifths is all upward in the major, and all downward in the minor; their attraction being towards the common center of the twelve scales which Nature has placed between the second of the major and the fourth of the minor, as seen in the two D's of the dual genetic scale, - the two modes being thus seen, as it were, revolving [Scientific Basis and Build of Music, page 113]

round a common center which is lying between them, as the double stars do in the astral heavens. When this plate is reversed we have before us exactly the minor scale, and all the parts and attitudes related in exactly the inverse way, each to each, so perfect is the duality in unity of the two modes. [Scientific Basis and Build of Music, page 114]


When Plate XIII. is divided up the middle of the column, as in Plate XIV., so as that one side may be slipped up a fifth, representing a new key one-fifth higher, its subdominant made to face the old tonic, the two new notes are then pictorially shown, the second being altered one comma and the seventh four commas. The key at this new and higher pitch is by Nature's unfailing care kept precisely in the same form as the first; and wherever the major scale is pitched, higher or lower, the form remains unaltered, all the intervals arranging themselves in the same order. The ear, and the voice obedient to it, carry Nature's measuring-rule in them, and the writing must use such marks as may truly represent this; hence the use of sharps, flats, and naturals; these, however, be it observed, are only marks in the writing; all is natural at any pitch in the scale itself. All this is equally true of the minor mode at various pitches. These two plates are only another and more pictorial way of showing what the stave and the signature are usually made to express. [Scientific Basis and Build of Music, page 114]

Ramsay - The Genesis of the Chromatic Scale