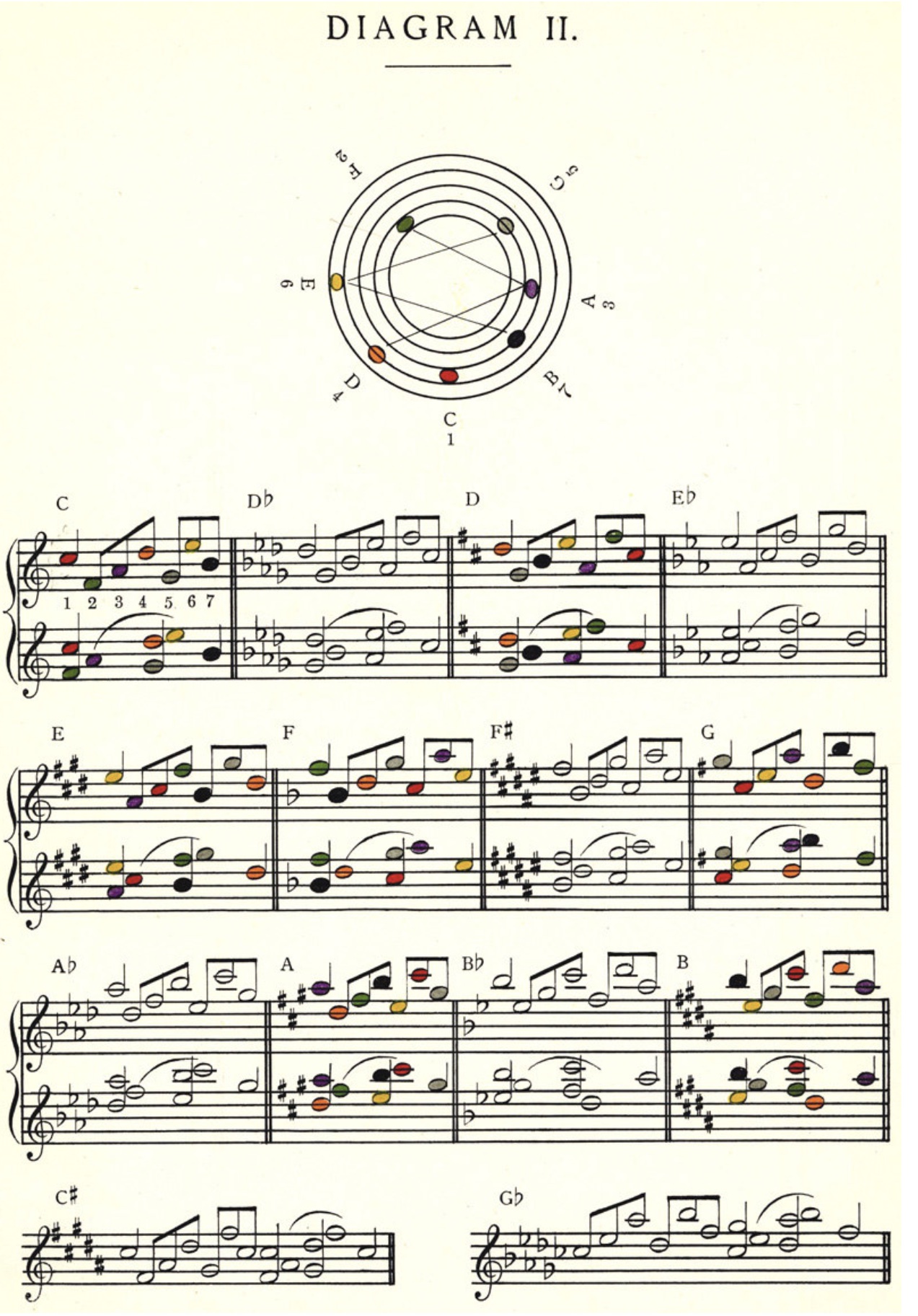 Hughes
The twelve key-notes, with the six notes of each as they veer round in trinities, are again written in musical clef, and the scales added. The key-note leads the scale, and, after striking the two next highest notes of the seven of the harmony, goes forward, with its four lowest, an octave higher. The seven of each harmony have been traced as the three lowest, thus meeting the three highest in three pairs, the fourth note being isolated. Notwithstanding the curious reversal of the three and four of the scale, the three lowest pair with the three highest, and the fourth with its octave. The four pairs are written at the end of each line, and it will be seen how exactly they all agree in their mode of development. Keys with sharps and keys with flats are all mingled in twelve successive notes. If we strike the twelve scales ascending as they follow each other, each thirteenth note being octave of the first note of the twelve that have developed, and first of the rising series, the seventh time the scales gradually rise into the higher series of seven octaves beyond the power of the instrument. Descending is ascending reversed. After the seven and octave of a scale have been sounded ascending, the ear seems to lead to the descending; but ten notes of any scale may be struck without the necessity of modulation; at the seventh note we find that the eleventh note in the progression of harmonics rises to meet the seventh. For instance, B, the seventh note in the scale of C, must have F#. This point will be fully entered into when examining the meeting of fifths. To trace the scale of C veering round as an example for all, we may begin with C in Diagram II., and go forward with F, G, A, and B an octave higher. If the twelve scales were traced veering round, they would be found to correspond with the twelve as written in musical clef. [Harmonies of Tones and Colours, Diagram IV - The Development of the Twelve Major Scales, page 26a]

AS an example of the twenty-four, compare A major, developing, in Diagram II., with A minor, Diagram IX., taking the notes in the order which they sound in trinities. The three notes of the primaries sounded by A minor are, first, the same root as the major; the two next are the fourth and seventh higher notes (in the major, the fifth and sixth); the secondaries only vary by the sixth and seventh notes being a tone lower than in their relative major. Observe the order in which the pairs unite; the fourth in depth, sounded seventh, isolated. A and its root do not rise from the chasms. The fundamental key-note C was seen not to be interfered with, neither is the fundamental minor key-note A; G# on the one side, and B♭ on the other, being the key-notes. The seven of each minor harmony embrace only seventeen tones. C major and A minor are the only two keys which sound the seven white notes of keyed instruments. The minor scale and chords of A are not included in this remark. [Harmonies of Tones and Colours, Diagram IX - The Minor Keynote A and Its Six Notes, page 34a]