Hughes
The twelve key-notes, with the six notes of each as they veer round in trinities, are again written in musical clef, and the scales added. The key-note leads the scale, and, after striking the two next highest notes of the seven of the harmony, goes forward, with its four lowest, an octave higher. The seven of each harmony have been traced as the three lowest, thus meeting the three highest in three pairs, the fourth note being isolated. Notwithstanding the curious reversal of the three and four of the scale, the three lowest pair with the three highest, and the fourth with its octave. The four pairs are written at the end of each line, and it will be seen how exactly they all agree in their mode of development. Keys with sharps and keys with flats are all mingled in twelve successive notes. If we strike the twelve scales ascending as they follow each other, each thirteenth note being octave of the first note of the twelve that have developed, and first of the rising series, the seventh time the scales gradually rise into the higher series of seven octaves beyond the power of the instrument. Descending is ascending reversed. After the seven and octave of a scale have been sounded ascending, the ear seems to lead to the descending; but ten notes of any scale may be struck without the necessity of modulation; at the seventh note we find that the eleventh note in the progression of harmonics rises to meet the seventh. For instance, B, the seventh note in the scale of C, must have F#. This point will be fully entered into when examining the meeting of fifths. To trace the scale of C veering round as an example for all, we may begin with C in Diagram II., and go forward with F, G, A, and B an octave higher. If the twelve scales were traced veering round, they would be found to correspond with the twelve as written in musical clef. [Harmonies of Tones and Colours, Diagram IV - The Development of the Twelve Major Scales, page 26a]

may be traced in the same way on the table; the third and seventh notes meeting, ascending and descending, sounding one harmony. [Harmonies of Tones and Colours, The Twelve Scales Meeting by Fifths, page 31a]

(click to enlarge)
[Harmonies of Tones and Colours, The Twelve Scales Meeting by Fifths, page 31a]


In the musical clef the sixth and seventh notes from A, the fundamental minor key-note, are repeated, in order to show the use of the poles D#-C♭, and that the colours agree. The use of the two poles, both in the major and minor series, is strikingly evident. [Harmonies of Tones and Colours, Diagram X - Minor Keynotes Developing by Sevens, page 35a]

THE same laws are followed here as in the development of the major scales. In that of A, F, the sixth note, has risen to F#, in order to meet B, which has previously sounded. In descending, the seventh note, B, falls to B♭, in order to meet F, which has also previously sounded. The notes, ascending or descending, always follow the harmony of their key-note, except when rising higher or falling lower to meet in fifths. We may here trace the twelve, the ascending scale sounding the fifth harmony higher than its key-note, and, in descending, sounding the fifth lower harmony. The four pairs of each scale are written at the end of the lines. If we strike the twelve scales as they follow in succession, the thirteenth note being the octave of the first, and leader of a higher twelve; having gained them six times, at the seventh they gradually rise (though beyond the power of a keyed instrument) into the higher series of seven octaves, and again, in descending, they fall lower, and are linked into the lower series of seven octaves. Nine notes of any ascending minor scale may be struck without the necessity of modulating beyond the fifth harmony. For example, in the scale of A, its tenth note, C#, rises to meet the sixth note, which has previously sounded. In descending, E♭, the eleventh note, meets B♭, the seventh note, which has previously sounded. The scale of A may be traced veering round by reference to Diagram IX., beginning with A, and carrying the four lowest notes an octave higher, F rising to F# in ascending, B falling to B♭ in descending. [Harmonies of Tones and Colours, Diagram XI - The Twelve Minor Keynotes with the Six Note of Each, page 36a]

If we strike the ascending scales as written in musical clef again, beginning with the lowest A in the bass clef, we see that the second and sixth notes of each scale meet in higher harmony; the sharp or flat of the scale which varies from the seven notes of its harmony is written to each note. We descend as written in musical clef upwards; each third and seventh note meet in lower harmony, and thus all exactly agree in their mode of development. Having examined the scales as written in the table below, where the sharp or flat as before is marked to each note, but not to the keys, let us strike the key-notes, trinities, scales, and chords. The three harmonies of each key are written at the end of each line of musical clef. To descend, we follow the musical clef upwards, as before. [Harmonies of Tones and Colours, Diagram XIV - The Modulating Gamut of the Twelve Minor Keys by Fifths2, page 40] 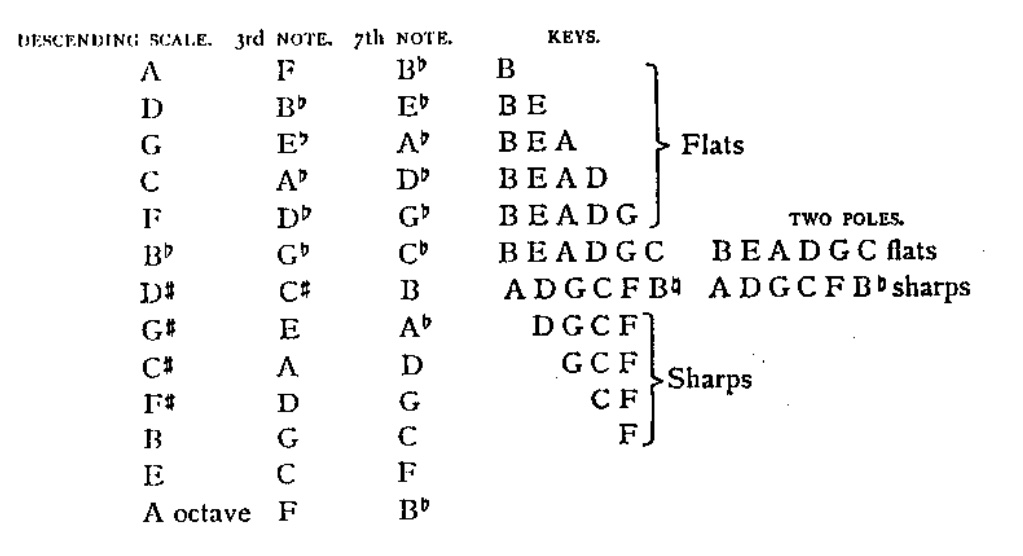 (click to enlarge)
[Harmonies of Tones and Colours, Diagram XIV - The Modulating Gamut of the Twelve Minor Keys by Fifths3, page 41a]


"I esteem myself fortunate in being introduced to you, and becoming acquainted with your beautiful work on 'Tones and Colours.' I have, to the best of my ability, worked out your idea, by writing down in music the various discords in use amongst musicians, and resolving them according to the laws of Harmony, and I find in all cases the perfect triad agrees with what you term the trinities in colours. The way in which you find the whole circle of Major and Minor keys by pairs in colours is deeply interesting, and must be true. The only point of divergence between your system and that recognised by all musicians is the ascending Minor Scale. No musically trained ear can tolerate the seventh note being a whole tone from the eighth. The Minor second in the lower octave descending is very beautiful, and it is strange how all composers feel a desire to use it. To mention one case out of hundreds, I may cite Rossini's well-known air, 'La Danza.'
"Yours faithfully,
"W. CHALMERS MASTERS." [Harmonies of Tones and Colours, Supplementary Remarks and Diagrams, page 53]

The Major Scales are the type of Creation perfected—man being created, and the Almighty resting—every Major Scale developing the sixth and seventh notes, and the eighth the octave of the first. Therefore, every Major Scale includes the Sabbath, or Rest. [Harmonies of Tones and Colours, Supplementary Remarks, page 54]

The Minor Gamut modulating in the meeting of fifths through seven octaves. We may here trace the twelve, each fifth note becoming the higher key-note. But the sixth and seventh notes of the scale are discords. For example, in the key of A, the sixth note, F♮, is a discord with the second note, B♮; and the seventh note cannot be sounded as G# falling into the eighth, without being a discord with the third note, C♮. No octave can be sounded in the Minor Scale, as it has risen into the fifth higher key of E. [Harmonies of Tones and Colours, The Minor Gamut Modulating in the Meeting of Fifths61, page 65]