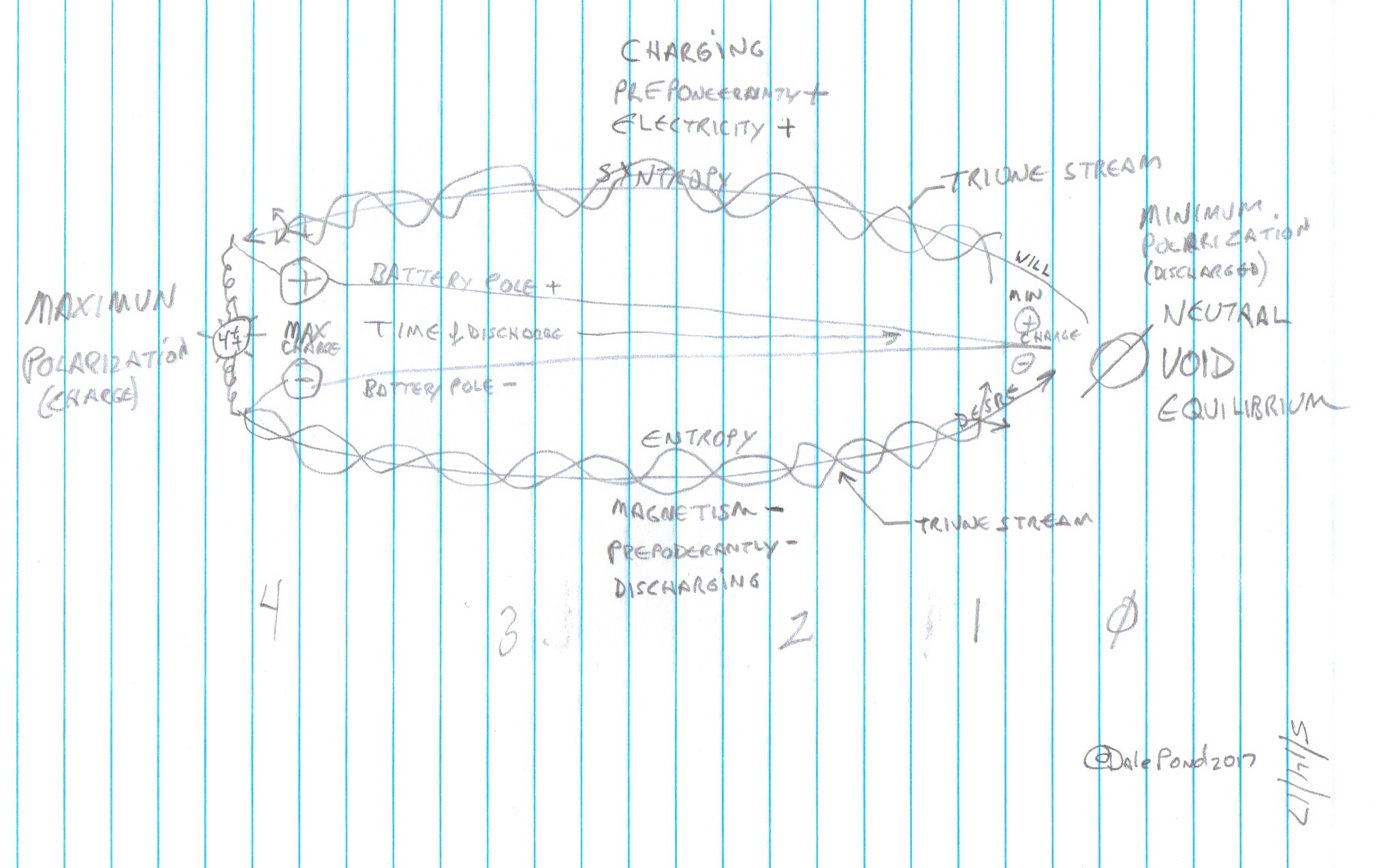 Keely "Science will in time classify the important modifications of the one force in nature as sympathetic streams, each stream composed of triple flows. Keely maintains that the static condition which the magnetic needle assumes when undisturbed by any extraneous force outside of its own sympathetic one, proves conclusively that the power of the dominant third, of the triple combination of the magnetic terrestrial envelope, is the controlling one of this sympathetic triplet, and the one towards which all the others coordinate. All the dominant conditions of nature represent the focal centers towards which like surrounding ones become sympathetically subservient. The rapid rotation of the magnetic needle of a compass shown in his experiments rests entirely on the alternating of the dominant alone, effected by a triple condition of vibration that is antagonistic to its harmonious flow as associated with its other attendants. A rapid change of polarity is induced and rapid rotation necessarily follows. [Snell Manuscript - The Book, DISTURBANCE OF MAGNETIC NEEDLE, page 8]

"The human ear cannot detect the triple chord of any vibration, or sounding note but every sound that is induced of any range, high or low, is governed by the same laws, as regards triple action of such that govern every sympathetic flow in Nature. Were it not for these triple vibratory conditions, change of polarity could never be effected, and consequently there could be no rotation. Thus the compounding of the triple triple, to produce the effect would give a vibration in multiplication reaching the ninth, in order to induce subservience, the enumeration which it would be folly to undertake, as the result would be a string of figures a mile in length to denote it. [Snell Manuscript - The Book, DISTURBANCE OF MAGNETIC NEEDLE, page 8]

Ramsay
save in polarity with the idea of the infinite. Victor Cousin, in exhibiting the primary elements of the human consciousness, shows that there are two dualities. Let a man turn his attention in upon himself, he will find, first of all, the me and the not me as a dual conception. Apart from all details of information about the me or the not me, different persons know, some more, some less, about either or about the two, every infant, even in the very first moment of contact, is conscious of the me and the not me as an inevitable dual conception. But both of these are found in the limitation they impose on each other; and lo! there springs up here another idea, the idea of the limited - the finite; but this cannot be conceived apart from the simultaneous conception of the infinite; the finite has no meaning save as the pole or dual of the infinite. Here, then, is duality or polarity among the primary contents of the consciousness. And this but the beginning of the polarity of thought. [Scientific Basis and Build of Music, page 42]

Russell
"Polarity and sex are one. The two poles which unite are male and female opposites in all matter. The idea that sex is solely a characteristic of organic bodies is not a true concept. Sodium and chlorine are as male and female as man and woman are male and female. Every particle of matter in the universe is either male or female, and these pairs are electrically projected together in the ratios of force which Newton gave to the acceleration of gravity, and upon a multiplication of speed and potential principle, which Einstein gave in his Equation of 1905.

If, therefore, all motion is solely for the purpose of either seeking sex union or sex division, why should we not immediately remodel our thinking to conform with Nature's processes and now think of our divided, double Pressured universe as an electrically sex conditioned one?" [Atomic Suicide, Chapter 4 - The True Nature of This Mind and Motion Universe - part VI, page 86]

"Polarity begins as sexless unity at the cathode, which is the location for the inert gases in the octaves of elements. From there it is divided into sex-conditioned pairs as they are extended centripetally toward anodes. They again unite as one sexless unity at amplitude wave positions where they collide and become the two hemispheres of an incandescent microscopic, or macrocosmic sun, which corresponds to a "loop of force" in an electric current." [Atomic Suicide, page 182]

The fact that opposite polarities void each other when thus contacted has not been considered as a factor in the matter. It is a fact, however, when two opposites are thus brought together by their seeming eagerness to contact each other, both poles cease to be. Each one has voided the other as completely as the chemical opposites sodium and chlorine void each other and leave no trace of either one after that contact. [A New Concept of the Universe, page 18]

(A) . . . He has not willed that any soul should perish, but from the beginning has prepared a way of escape! What, then, is the meaning of the separation? Bringing into being the various phases that the soul may find in its manifested forms the consciousness and awareness of its separation, and itself, by that through which it passes in all the various spheres of its awareness. Hence the separation, and light and darkness. Darkness, that it had separated that a soul had separated itself from the light. Hence He called into being Light, that the awareness began. Hence we look out and see the heavens, the stars; and, as the psalmist has said: "The heavens declare the glory of God and the firmament sheweth his handiwork, as day unto day uttereth speech and night unto night sheweth knowledge" . . .

(Q) (295): May I have a message on Day and Night that will help me in my contribution to the lesson?

(A) Think on the experiences of self, as self has passed from darkness unto light, from day unto night, in the mental associations of that which makes the awareness of that which would make of thee a channel of blessings to many. And then there may be seen in self's experience the meaning of what is Day , and what is Night. The ability to become aware; or, to put into other words, to become conscious is Day and Night . . .

(Q) (379): May I have a message that will help me in contributing to the lesson?

(A) In self's own physical self there may be the illustration of Day and Night. Each element, each corpuscle of the body is a universe in itself, or a universe on the beginning of power and force. When there is that called dis-ease, there becomes the unawareness or the darkness of the light that may become Life in its manifested form. So, from Day and Night gain this lesson: Only in the experiencing of that which is the awareness of same may we know what is Day and Night. [Cayce (262-56)]

Osho
LOOK FOR THE FLOWER TO BLOOM IN THE SILENCE THAT FOLLOWS THE STORM: NOT TILL THEN.

One of the most basic laws of life has to be understood. Life is based on polarity; everything exists with its polar opposite. Otherwise is not possible. Mind exists because of matter; mind is the polar opposite.

How can you reach ecstasy if you have not known agony? If you reach the world of ecstasy without knowing what agony is, you will not be able to recognize it. The recognition is impossible. Only through darkness can light be recognized.

You may be living in light, but if you don't know darkness you cannot know that you are living in light. A fish in the sea cannot know that the sea exists. Only if the fish is thrown out of the sea does it come to recognize the sea. If it is thrown back into the sea again, the fish will be totally different and the sea will be totally different. Now the fish will be able to recognize it.

Sansar, the world, is just a training ground. You must be thrown deeply into matter. Only then can you come back to the other pole, to the peak of consciousness.

This sutra says LOOK FOR THE FLOWER TO BLOOM IN THE SILENCE THAT FOLLOWS THE STORM: NOT TILL THEN. The real, authentic silence happens only after you have passed through a storm.

Only when the storm is over can the silence explode within you, never before.

You can create a false silence before the storm, but then you are just deluded. You can create a stillness - artificial, cultivated, forced from without - but it is not spontaneous, it is not of your inner being. Osho