Sympathetic Vibratory Physics » There is no Death

There is no Death 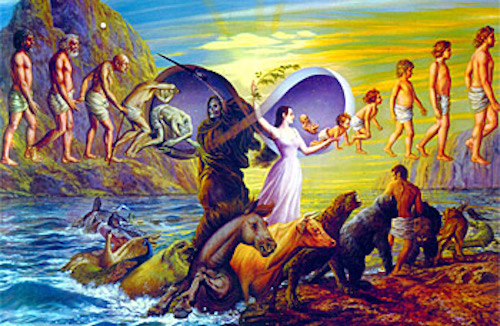 "In man’s inhaling there is life, and death trails his exhaling, yet must man breathe out to live again and deeply in that he may die.

"Know thou then that I alone live. I do not die, but out of Me cometh both seeming life trails his exhaling, yet must man breathe out to live again and deeply in that he may die.

"Life is but the inward flow of My thinking's divided pulsing, and death is its outward flow.

"Know also that the divisions of My thinking are but equal halves of One; for I again say that I am One; and that all things which come from Me are One, divided to appear as two.

"All things come and go from My divided thinking.

"All coming things are living things, and those which go are dead.

"Know thou that all creating things are resurrected from the dead, and dead things live again through My divided thinking.

"Again I say that all things are bound as One through Light.

"I am forever creating My living body and destroying it in seeming death that it may live in Me to die and live again.

"The end of life in death is life's new beginning. Both life and death are one in Me.

"All things are forever living and forever dying; and while they live they die; and also while they are in death they live.

"Such is My decree, My universal law, from which there is no escape for man, or star, or grain o f sand; for all things flow from Me that they may appear to man, and return to Me, that they may disappear from his senses in the cycle of My thinking.

"I am the repetitive God. All things which flow to Me and from Me flow again both ways through Me forever in a cycle which ends not, nor has begun.

"Death is the seed of life.

"Death rebounds from death as life.

"From death life springeth from the soil; and from life death floweth even as the perfume leaves the rose.

"Death giveth of itself to life that life may live; and likewise life giveth to death that death may die.

"Life is regenerating death, and death is life degenerating.

"Light leaves thy sun as death and comes to thee as life; and when thy death leaves thee it likewise becomes new life to whom or in what its impact quickens with thy death.

"Two ways there are of breath, the inward-charging breath of life and the outward-discharging breath of death. All opposed pairs of My divided thinking pass in opposite ways along these two paths in their traversing of My cycle.

"All things which I have divided into pairs of opposites have within them both life and death; but one of these is greater than the other until they meet as equals halfway round My life-death cycle. When once they meet, and pass, they then exchange these qualities, the greater growing lesser and the lesser growing greater.

"Even though life is full when life is born, death emanates from life itself as death, and takes the opposite path toward death.

"Likewise, does life emanate from death to weaken it when death is strong, until life conquereth death to make death live as life.

"Verily I say, life cannot live without dying as it lives. Nor can death conquer life and gather aught to it but death.

"Life is My multiplying breath of compressive action; and death is My dividing, opposed breath which expands as life's reaction.

"Hear thou Me when I again say that life and death are opposites which pass each other on My cycle going opposite ways. Life attracteth life to life by its compression and death repeleth both death and life by its expansion.

"I am the interchanging point of life and death. I balance life with death; and never in their changing can either death or life outbalance death or life.

"Write thou that death and life are one, as the swinging pendulum is one, e'en though it oscillates two ways in its incessant swinging.

"Likewise life traileth the eastern road to arrive at death, while death taketh the western road where life awaiteth to quicken death as life.

"Take thou man’s death away from him in this new day of man. Give him eternal Life in Me by knowing Me in him." -From THE DIVINE ILIAD [Walter Russell, The Secret of Light, pages 190-195]