"We cannot live only for ourselves. A thousand fibers connect us with our fellow men; and among those fibers, as sympathetic threads, our actions run as causes, and they come back to us as effects. Herman Melville

That which connects vibration to vibration is harmony, unison, sympathy and Love resulting in entangled entities. Sympathetic Vibration or the connecting link, harmony, is best understood through the Laws of Harmony or Laws of Music. Connection is made by/through etheric level sympathetic vibration or sympathetic oscillation between frequencies which frequencies may be resultant tones or simple overtones (Overtone Series) or undertones of a fundamental tone. [See Bjerknes Effect]

Keely
"All needs to be done is to secure a uniform speed under different velocities and control reversions .. some few years ago, I contemplated using a wire as a connective link between two sympathetic mediums, to evolve this power as also to operate my machinery - instead of tubular connections as heretofore employed - I have only recently succeeded in accomplishing such change. This, however, is the true system ... henceforth ... the power will be generated, my engines run, my cannon operated, through a wire." [Snell Manuscript - The Book, page 3]

"The activity of the corpuscles represents its outflow from the luminiferous track towards the molecular centers of neutrality, revealing the connecting link between mind and matter." [Keely, Dashed Against the Rock] 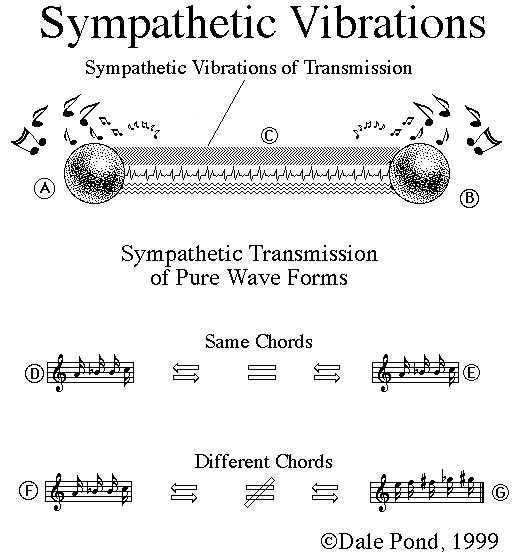 "Force and energy is accumulated and held latent in interstitial space by corpuscular aggregation, otherwise the progressive disintegration of water could not induce increased volume and pressure. The sympathetic latent power is held in interstitial corpuscular aggregation by the incalculable velocity of the molecular etheric capsule and the atomic etheric capsule, which rotate at billions of times per second.

"Corpuscular activity represents the outflow of the ether from the luminiferous toward neutral centers of aggregation, revealing the connecting link between mind and matter. This luminosity has no thermal accompaniment, yet all thermal conditions evolve from etheric vibration."

"The mighty forces latent in corpuscular matter are held in oscillating vortex action by this latent power exchanging sympathetically with the celestial radiating stream - the inflow attracted by receptiveness and the outflow impelled by expressiveness - giving light, heat, magnetism, electricity, each in its different order, by positive radiation." Snell Manuscript

"The power of attractive vibration of the solar forces is the great coincident towards which the terrestrial magnetic sympathetic flow is diverted. This force is the celestial current that makes up the prime third of the triple association. It also induces aqueous disintegration and thermal concentration, the two prime conductors towards this coincident chord of sympathy with itself. Without this aqueous disintegration there would be no connective link between the celestial and terrestrial. There would exist nothing but a condition of luminous radiation on the order of the aurora - a reaching out for the concordant without any sympathetic diversion to create unstable equilibrium of terrestrial magnetism. In fact under such a condition, the absence of the sun on one side, or the absence of water on the other, the magnetic or electric force would remain in a stable state of equilibrium, or the highest order of the chaotic." [Vibratory Physics - The Connecting Link between Mind and Matter]

"Mr. Sinclair is as firm in his belief as is Mr. Keely that this element [sympathy] is the great connecting link between the Creator and the created, and that it is capable of rendering more marvellous services to man than all the discovered uses of electricity." [A New Creed]

"There is no conductivity in the ether lines", writes Sinclair, "for selfish desires and motives; for they are not of the soul, but are only sounds of the lips" (or wishes of the material part of us), "so that the established connecting-rod between the living soul and the source of life is insulated from desires that are not begotten in sympathy, and they at once run to earth. Where there is no connection there can be no communion. Without the natural sympathetic etheric connection between the Source of Life and the soul, there can be no communication". "A New Creed", like the sympathetic etheric philosophy of Keely, reveals the connecting link between the finite and Infinite, and teaches us that the primal law of evolution and of progress is slowly but surely preparing our race for the time when Christianity will be something more than a mere profession, and the brotherhood of humanity will no longer be the meaningless phrase that it now is. We are led to see, by this pure philosophy, that "our solar system is a type of a healthy social system; that in it each one affects, binds, controls, sustains, helps, makes free each other; that no star lives for itself alone; that man was not made to mourn; and that our sufferings arise from our ignorance of the laws governing the innate motive power within us." [A New Creed]

Keely’s Connective Link
Russell’s Electric Thread of Light
"Clerk Maxwell seems, when theorizing on sound transmission by an atmospheric medium, not to have taken into consideration the philosophy attending the phenomena of the origination of electric streams in celestial space. Light is one of the prominent evolved mediums in electric action, and is evolved by corpuscular bombardment induced by sympathetic streams acting between the neutral centres of planetary masses, all of which are under a condition of unstable equilibrium. These unstable conditions were born in them, and were thus designed by the Architect of Creation in order to perpetuate the connective link between the dispersing positive and the attractive negative. The action that induces this link I call sympathetic planetary oscillation." Keely, Vibratory Physics - The Connecting Link between Mind and Matter

"The familiar return ball with which a child plays is a good example of electric strain. When the ball is thrown from the hand, the elastic gradually tightens to increase the tension of resistance to strain generated in the elastic. The strain continues to intensify until the ball comes to rest. When the ball returns, the strain gradually lessens until the ball again comes to rest in the child's hand. When that happens, the strain and tension have been voided. Tension has not BECOME rest; it has ceased to be.
This whole electric universe is a complex maze of similar tensions. Every particle of matter in the universe is separated from its condition of oneness, just as the return ball is separated from the hand, and each is connected with the other one by an electric thread of light which measures the tension of that separateness." Walter Russell, The Secret of Light, pages 139-140

Law of Harmony
"When one looks in nature of every character, the first law is harmony, and is of divine origin, even as life, and when same is not in accord WITH that of the Creative Energy, or God, discord is the result." [Cayce (4733-1) (underline added)]

"For music alone may span the space from the realms of the divine to the spheres of activity." [Cayce (3509-1)]

"For remember, music alone may span the space between finite and infinite." [Cayce (3659-1)]

"Music is the one element which may span the distance between the sublime and the ridiculous." [Cayce (5253-1)]

".. music, - that is of the nature that brings into association those forces of the celestial as well as the mental and spiritual..

"Then, give particular attention to the music in the experience of the entity; not only as the channel, but as an outlet for itself in its desires for expressions in the mental and the spiritual. For, hath it not been said that only music may span the space between the finite and the infinite? The entity's music maybe the means of arousing and awakening the best of hope, the best of desire, the best in the heart and soul of those who will and do listen. Is not music the universal language, both for those who would give praise and those who are sorry in their hearts and souls? Is it not a means, a manner of universal expression? Thus may the greater hope come." [Cayce (2156-1) (underline added)]

"Music is what appeals to the latent and the creative force within the entity. For music alone may span the sphere from the sublime to the ridiculous - from the finite to the infinite - from the spheres of activity to realms of the divine. Music is like color, like tone, in that it is a destructive or a creative force - depending upon that to which it appeals, in its influence upon individuals." [Cayce (622-2)]

"Do learn music. It is part of the beauty of the spirit. For remember, music alone may span the space between finite and infinite. In harmony of sound, in harmony of color - even in harmony of motion itself - all beauty is akin to the soul - self's expression of harmony of the mind. That is, if all these are used properly in relationship to body.

"Not that music is to be made the major portion of thy life. But let much of thy life be controlled by the same harmony which is in the best music - yea, in the worst music also, for it too has its place. But cling to that which you experience by listening and watching a mother sing the lullaby of Brahms. Catch something that is shown in the love and emotion of the body as it sings the Song of Songs, or in the pure, true notes of Songs My Mother Taught Me." [Cayce (3659-1)]

Russell
"In Fig. 62 you see God's end of the bridge between the Creator and His Creation. In Fig. 63 you see man's end of it. In Fig. 64 you see how both ends are united by the electric wave, and in Fig. 67 by the electric current." [Atomic Suicide, page 259]