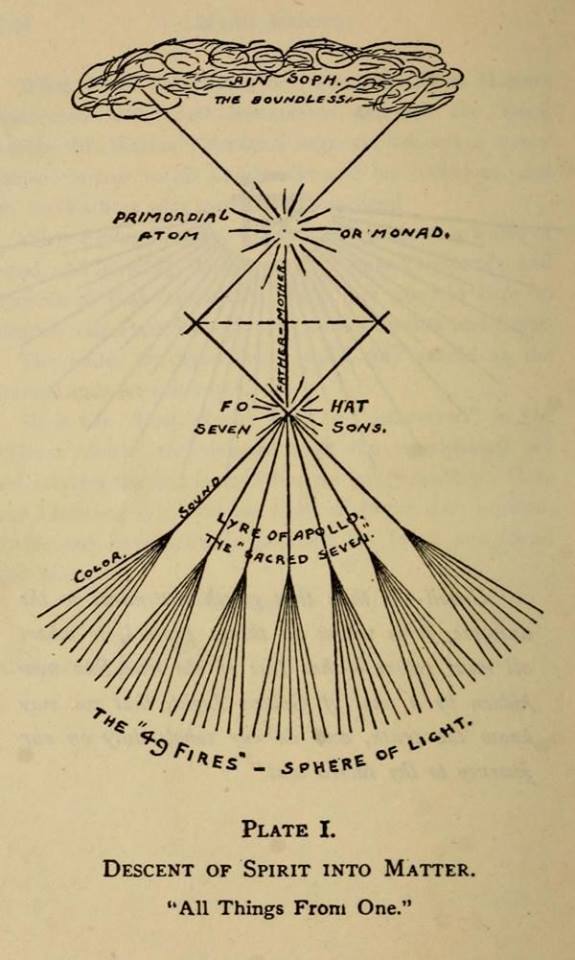 (from Symbolism or Mystic Masonry by J. D. Buck, MD) (click to enlarge)

"This something, at present unknown to Western speculation, is called by the occultists Fohat. It is the “bridge” by which the "Ideas” existing in the "Divine Thought” are impressed on Cosmic substance as the "laws of Nature.” Fohat is thus the dynamic energy of Cosmic Ideation; or, regarded from the other side, it is the intelligent medium, the guiding power of all manifestation, the "Thought Divine" transmitted and made manifest through the Dhyan Chohans, the Architects of the visible World. Thus from Spirit, or Cosmic Ideation, comes our consciousness; from Cosmic substance the several vehicles in which that consciousness is individualized and attains to self — or reflective — consciousness; while Fohat, in its various manifestations, is the mysterious link between Mind and Matter, the animating principle electrifying every atom into life." [Blavatsky]

4.1 The main verbal root foh is a Tibetan-Mongolian word which could be translated as Buddha-life or Buddha-vitality. Fohat is a philosophical term, having the general meaning of cosmic life or cosmic vitality, ever guided by cosmic mind or intelligence. Why did the Mongolians use this term? Because they refused to see in the wonderful, symmetrical, mathematical and harmonic structure of the Universe, a play of blind and soulless forces on dead matter such as has been the dominating way of scientific thinking in the West for so many years. They gave it the name Fohat because their consciousness conceived of the cosmic vitality under its proper meaning – Buddha-life: - the intelligent buddhic foundation of the manifested universe; - the cosmic life, conveyed by universal consciousness, universal wisdom, and therefore correctly understood to be universal life, embodying and directed by universal intelligence. In the Secret Doctrine I (p. 107-8) this is expressed as follows: Fohat is the steed: the Cosmic Thought is the rider. The source of Fohat is Cosmic kama or desire in the Cosmic Thought. In a specific meaning it is identical with the old mystic Greek word Eros. In the Symposium of The Dialogues of Plato Socrates discusses with his friends the characteristics of the god Eros. They conclude that Eros can neither be beautiful or good, because you only desire what you don’t possess yet. Subsequently Socrates speaks of the lessons he learned from a wise lady called Diotima who described Eros generally as the desire (the love) of the everlasting possession of the good ..... and that, through this desire, man seeks immortality [4]. From this we may conclude that Fohat or Eros is the desire, the driving force, to bring a being from its present - relative - disharmonious state into a state of balance, of harmony. This force is expressed as a delta, a difference in “voltage,” “pressure,” “height,” etc. So we can say that on the human plane Fohat corresponds to desire or passion. In another way, we also might call it kama-prana or prana-kama; desire combined with vitality. Those two are inseparable, because there is vitality in every one of the human principles. Fohat is the incessantly operating, ever moving driving force in Nature. It is incessant action and is both constructive and destructive. For through the incessant operation endless transitions take place from one phase of manifested existence to another. Fohat is operating both at macrocosmic and microcosmic level: between the suns of the Milky Way and between the electrons of an atom and between the atoms.

In The Secret Doctrine, it is revealed that the "Sons of Fohat" are the personified forces known as motion, sound, heat, light, cohesion, electricity, and magnetism. Every impulse or vibration of a physical object producing a certain vibration of the air - that is, causing the collision of physical particles, the sound of which can affect the ear - produces, at the same time, a corresponding flash of light, which will assume some particular colour. An audible sound is but a subjective color, and a perceptible color is but an inaudible sound. Both proceed from the same potential, plastic substance, which is invisible space. Every human passion, every thought and quality, is indicated in the aura by corresponding colours and shades of color, and certain of these are sensed and felt rather than perceived. As a string vibrates and gives forth an audible note, so the nerves of the human body vibrate and thrill in correspondence with various emotions under the general impulse of the circulating vitality of prana, thus producing undulations in the psychic aura of the person that result in chromatic effects. The human nervous system may be regarded as an Aeolian harp, responding to the impact of the dynamic vital force and manifesting the subtlest shades of the individual character in color phenomena. Blavatsky continues to elucidate the Eastern ideas concerning the original elements and ethers in The Secret Doctrine and leads the reader to the Being of Fohat, that Fohat may be the most important being in cosmology and holds the secrets to human spiritual evolution. At first, Fohat seems to be the source that akasha, the primal ether, originated from. Fohat is at once an unmanifest force that creates all forces, the forces themselves, the effects on the mediums the force acts within, and the consciousness of both the divine and human affected by Fohat. Fohat even seems to be the image of what a human being was created to become. Fohat is our past our present, and our future, simultaneously. Fohat is cosmic electricity, primordial light, the ever-present electrical energy, the universal propelling vital force, the ceaseless destructive and formative power, the synthesis of the many forms of electrical phenomena. Blavatsky writes in The Secret Doctrine: In the manifested Universe, there is 'That' which links spirit to matter, subject to object. This something, at present unknown to Western speculation, is called by the occultists "Fohat." It is the bridge by which the Ideas existing in the Divine Thought are impressed on Cosmic substance as the laws of Nature. Fohat is thus the dynamic energy of Cosmic Ideation; or, regarded from the other side, it is the intelligent medium, the guiding power of all manifestation, the Thought Divine transmitted and made manifest through the Angel Hosts, the divine architects of the visible world. Thus, from Spirit, or Cosmic Ideation, comes our consciousness; from Cosmic Substance the several vehicles in which that consciousness is individualised and attains to self - or relative - consciousness. Fohat, in its various manifestations, is the mysterious link between Mind and Matter, the animating principle electrifying every atom of life." From The Eternal Ethers: A Theory of Everything Douglas Gabriel Fohat - Electric Plasma Currents Pervade Space https://theosophywatch.com/2015/10/01/fohat-electric-plasma-currents-pervade-space/

“The Central Sun causes Fohat to collect primordial dust in the form of balls, to impel them to move in converging lines and finally to approach each other and aggregate.” (Book of Dzyan). . . . . “Being scattered in Space, without order or system, the world-germs come into frequent collision until their final aggregation, after which they become wanderers (Comets). Then the battles and struggles begin. The older (bodies) attract the younger, while others repel them. Many perish, devoured by their stronger companions. Those that escape become worlds.” (SD I:201)hpb

"Fohat is a generic term and used in many senses. He is the light (Daiviprakriti) of all the three logoi—the personified symbols of the three spiritual stages of Evolution. Fohat is the aggregate of all the spiritual creative ideations above, and of all the electro-dynamic and creative forces below, in Heaven and on Earth. There seems to be great confusion and misunderstanding concerning the First and Second Logos. The first is the already present yet still unmanifested potentiality in the bosom of Father-Mother; the Second is the abstract collectivity of creators called “Demiurgi” by the Greeks or the Builders of the Universe. The third logos is the ultimate differentiation of the Second and the individualization of Cosmic Forces, of which Fohat is the chief; for Fohat is the synthesis of the Seven Creative Rays or Dhyan Chohans which proceed from the third Logos." http://www.katinkahesselink.net/blavatsky/articles/v10/y1889_006.htm M. Sufilight says: Therefore I find that I will call Fohat and Daiviprakriti nothing else but HEARTFLOW or compassion - LIFE and Life-force in its essence. The fiery power which resides as a Kundalini-Shakti in the innermost chamber of the spiritual Heart of each Seeker after Truth, inside each Sky-Walker. Yet, there are several aspects of Fohat (Daiviprakriti) - as Force in itself - something which can be observed in the reference to The Secret Doctrine Vol. I, p. 292-293 in the above. https://www.youtube.com/watch?v=PBb7pZsiJHY

Blavatsky
bridge
cosmic bridge
desire
invisible bridge between heaven and earth
Figure 3.16 - Idea Preceeds Manifestation in Material Form using Cubes and Cones
How Idea Becomes Matter or Disease
Idea of Creation
idea
Masonic G
record Idea
The Coming Force Keely and Fohat
11.06 - Something from Idea and Will
11.07 - Idea plus Will plus Spirit - Manifestation
14.20 - Dominant is Light of Mind or Thought or Idea
vril
Vril Force
vril staff
Vril, The Power of the Coming Race