Resultant tones are produced by simultaneously sounding two or more primary tones, which may be simple or composite tones. see Power of Beat Harmonics

Resultant tones produced by the combination of the ordinary harmonic intervals. The resultant tone is deeper than the lowest primary tone by:

"When pure tones (sine waves) are sounded together, they combine to produce two additional tones whose frequencies are the sum and difference of the two original tones. For example, if the original frequencies are 32hz and 48hz, the resultant frequencies will be 80hz and 16 hz. While this effect occurs at all frequencies, it is most effective to the human ear at low frequencies. (This same acoustical principle is used by celestes to produce a different effect.)

In many cases both pitches are taken from the same rank of pipes, a fifth apart, as a further cost-saving measure. Because 5ths in the equal-tempered scale are not perfect fifths, the resultant tones will not be quite in tune, but it works because the human ear does not hear such low tones with enough accuracy to tell the difference.

The name Gravissima is typically only used for a 64' stop. N.B. There are exactly two true 64' stops in existence. One is the Diaphone Profundo at Atlantic City; the other is a Contra Trombone at the Sydney Town Hall. Tonal Attributes In order to be effective, the pipes should be large scale flues, either open or stopped. Bourdons and Diapasons are most often used; reeds are almost never used. Usage This stop is a replacement for a true 32' or 64' stop. It is not as effective as a true stop, but is often the only economical way to obtain 32' tone in a modest instrument. It is almost invariably found in the pedal. Variants A single 5th sounding stop at 10 2/3' or 21 1/3' pitch is often provided to achieve the same effect. This has the advantage that it can be combined with a variety of octave sounding stops. See Grossquintenbass. Examples 32' examples are fairly common. 64' examples are rare, Julian Rhodes keeps a compilation by David Willey that lists about 40 examples. A few examples are listed here. 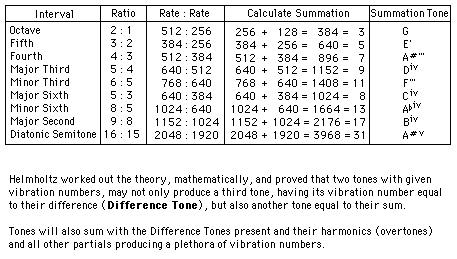 1.23 - Power of Harmonics through Summation Tones 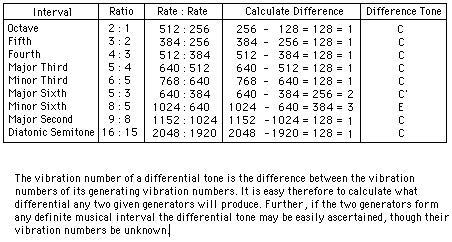 Ramsay
A grave harmonic is a secondary note which spontaneously arises when two different notes are sounded together. It is a note whose mathematical number is the difference of the two which awaken it; e.g., F2 and C3, the interval of the fifth, awakens a grave harmonic whose number is 1, which is the difference of 2 and 3; and this 1 strengthens F2, for it is its lower octave. But the interval of F2 and F4, or any other octave, does not awaken a grave harmonic, since there is no difference-number between the two. - Editor. [Scientific Basis and Build of Music, page 36]