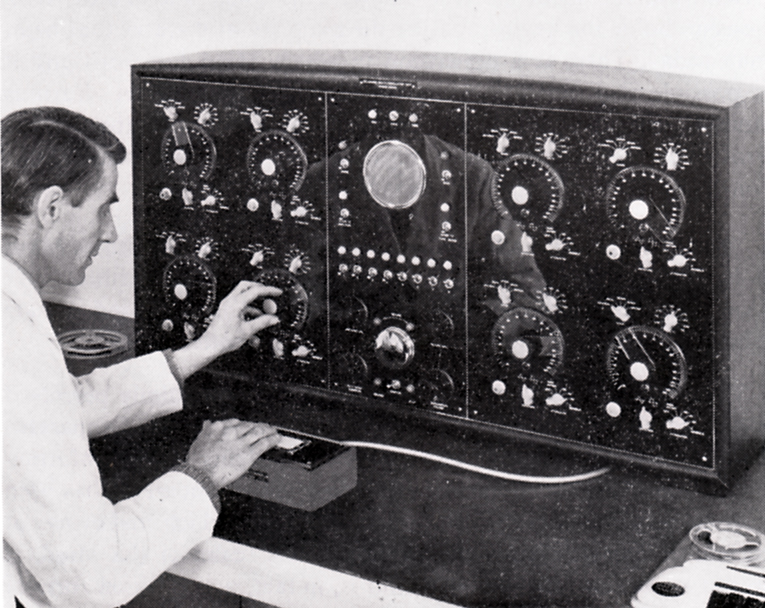 
"In [its] widest form Radionics can be said to be the meeting ground of all the sciences, and those who wish to study this exciting subject would do well to commence by giving serious attention to Dr. Abrams' work. His method of differentiating between the numerous radiation patterns emitted by the human body has provided the basis for all the subsequent work in this field." [George William de la Warr]

De la Warr's experience and research caused him to believe these resonances, especially in living matter, were extremely complex waveforms corresponding to harmonies and chords. This resonance phenomenon, he believed, established a relationship, "link," or force field that acted as a "carrier" for whatever energy was used with it, such as light or sound. Resonant links of this kind could be established between blood, hair, and photographs - all the normal witnesses found in traditional radionics procedure. Because the resonant link was more information than energy, it did not obey the (usual) laws of physics and diminish in intensity with distance. Once the resonance between patient and operator was established, it would respond to influences, such as electrical stress, magnetism, sound, chemical action, or light. This revelation led to the design of devices for manipulating sound and light that were said to improve the therapeutic effect of his radionics equipment. [from duncanlaurie.com]

1) No electricity flows in the radionic circuit.

2) The radionic circuit performs the "tuning" and the operators' thoughts and/or intentions are not required for proper function.

3) The components of a radionic circuit create a structure[1] (energy matrix) in space that act as a physical (harmonic) counterpart to the etheric energies being tuned to. See Action at a Distance

4) All such devices operate via sympathetic association between the tuned circuit and the object tuned to.

5) Some radionic devices do use the Mind to Mind connection.

[1] Chord of frequencies; vibration signature; compound vibration waveform. On a Black Box radionics device each knob sets a component of the waveform; see Figure 8.14 - Some Basic Waveforms and their constituent Aliquot Parts.

Magic, as commonly misunderstood, does make use of some good principles. Unfortunately so much superstition and misconceptions have grown up around and in so-called magic as to make of it a hairy nightmare (sorry Mr. Potter!) for any intelligent or scientific approach. If we back off a bit and strip magic of its superstitions and lore we can then see some of these principles of Mind in a clear light of understanding.

The causitive force is Mind. Everything else is its effects. For centuries all mankind (with a few notable exceptions) ever did was study effects. Now is the time to study Cause; i.e., Mind. Magic and radionics deal in effects. Few realize the Cause is the magician's mind or the radionic operator's mind. The instruments used whether magic wands, cards, lines on paper (symbols) or radionic devices are crutches or aides in manipulating the patterns of thinking of the operator/magician to achieve specific thought patterns - which are the real cause in all effects whether "magic tricks" or healing at a distance. 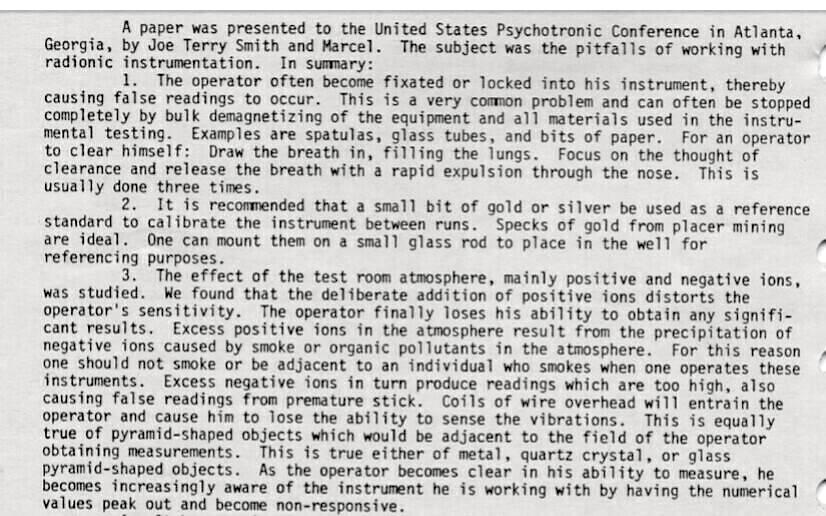 Antony C Sutton
"Radionics is the 'secret science'[2] of ancient Egypt. It survived the dynastic period, down through the ages, and in the 20th Century, emerged as "radiesthesie" in France, and 'Radionics' in England.

As you read this booklet, you will glimpse the amazing power of this science. You probably won't believe it, but we assure you, it is real. One aspect is "effect at a distance." It is possible to affect a physical entity at a distance without ANY physical means. Distance does not exist.

This booklet is based on a July 1995 speech by Dr. Andrew Michrowski, President of the Planetary Association for Clean Energy in Ottawa, Canada, that describes two (2) successful experiments conducted in New Brunswick in 1976.

Andrew Michrowski was at one time Chief Planner with Indian Affairs in Canada. He was also Senior Analyst with the Secretary of State (of Canada), involved in forecasting, creation, and evaluation of Federal policies and programs. He is President of the Planetary Association for Clean Energy.

The experiment he relates was to show the efficacy of radionics in resolving the infestation of Budworm in spruce forests in the Province of New Brunswick, Canada. According to Dr. Michrowski in his talk and in visual data, which he produced at the Conference, the experiment was a success. As he explains, this was also corroborated by neutral observers of the test.

Dr. Michrowski explained that the Irving family of Canada - the owners of the forests where the experiment was done - at first offered to pay for the work, but that at the conclusion of the tests, they refused to pay and instructed their on-site Manager, "This never happened."

The event did take place, however. Future Technology Intelligence Report has arranged for a duplicate test and has guaranteed payment on the "best efforts" basis.

The question arises: Why the hostility? FTIR speculates it is because this signals the end of the killer pesticide industry. If radionics proves as efficient as we are led to believe, it will be more efficient, safer, and far cheaper than chemical pesticides.

[1] It was mentioned in the old AMORC's monographs. A reference was made in the history/early pioneer section of Don Mattioda (Radionics/Homeopathy How To Manual): "Lewis took his discovery to Dr. A. Abrams in California in the early 1900's. Dr. Abrams publicized the discovery and made several strides forward."
[2] See Alchemy - Most Sacred Science

Some History of Radionics
Actually, the Jehovah's Witnesses figure largely in the history of radionics in America. The Watchtower Society promoted the use of Abrams-type devices to cure diseases (as an alternative to many practices of allopathic medicine which conflict with their religious beliefs.) They even had some specially produced by a J.W. Makers. One was called the "Radio Disease Killer" or RDK and another the "Electronic Radio Biola", which was advertised in the Watchtower Society's magazine, 'Golden Age'. [source unknown]