Nikola Tesla
“You see, electricity puts into the tired body just what it most needs — life force, nerve force. It’s a great doctor, I can tell you, perhaps the greatest of all doctors.” [Nikola Tesla]

Christ Returns - Speaks His Truth
"Every single person who realises that from their eyes is radiated potent life-force to those at whom the vision is directed, can know that their glance, that penetrating look, that smiling gaze has benefited the one who received it. For everything we - yes, you and I, the CHRIST, think and do is an act of consciousness - and consciousness is life-force. With the activity of our minds, yours and mine, we shape our consciousness, our life-force into different forms which will bless or curse the environment." [Christ Returns - Speaks His Truth, Letter 4, page 8]

"Science says that life began when in some unexplained way, a correct combination of chemical reactions produced a molecule capable of making copies of itself by triggering further chemical reactions. Such a description of the enormous and teeming complexity and power of the LIFE FORCE as being discernible because it is 'capable of replicating itself', reveals the basic impoverishment of scientific perception and thought which produced such a theory! Furthermore, the suggestion that such a combination of 'inanimate' chemicals could get together in a specific way - accidentally - to produce such an astounding result of 'self-replication' remains unquestioned scientifically. This is because the finite human mind, even though scientific, cannot deal with such a strange eventuality of uninitiated 'self-replication'. It is too suggestive of a magical occurrence - of some intervention from an unimaginable source which scientific men dare not contemplate for fear of ridicule. This sheep-like acquiescence is considered more scientific than producing 'inspired' theories blocked by the materialistic laws science has established for itself. This block to future scientific progress will prevent science properly investigating the realm of mind and spirit until some enlightened scientist defies convention and dares to cross the borderline between the 'seen and the 'unseen'.

Prophets of old, if presented with the theory of molecular self-replication would have no difficulty with such a 'magical occurrence' and would say that 'God' made the chemical combinations and imbued them with life. That would not be the right explanation either. It is this old religious concept of a 'God on High' 'creating from afar' which is blocking the man of science from moving forward to more spiritually aware reflections. Therefore, despite science's seeming emancipation from age-old doctrines, it is still as mentally bound and hindered by fears of ancient shibboleths as in the 19th century. It adopts its ridiculous theories because it has not yet perceived the 'Reality' of Our Source of Being behind and with in the living molecule." [Christ Returns - Speaks His Truth, Letter 5, page 8-9]

"What is the difference between the soul and psyche? I am now going to explain the difference which your earthly psychologists may dispute, but nonetheless, this is the truth. The Soul is the 'Divine Flame' - a metaphor used to describe the essence of Divine Life which is drawn into individual being at the moment of conception. LIFE FORCE takes on personal form and releases the energy of 'electrical force of activity' and the magnetic impulses of 'bonding - rejection' to embark on the intricate work of construction of the body. "Therefore, you have, at the core of your being,

this is Divine Intelligence / Divine Love Which is the powerful Divine Impulse to create, grow, nourish, nurture, heal, protect, fulfill every need, within a system of perfect law and order. "This is the Reality which is your soul. "Therefore, when you have overcome the ego impulses and invited the SOUL to hold dominion in your thoughts and feelings, you will be driven to express all of the Divine Impulses described above. You will be possessed by a desire to only promote the highest good of all living things and the universe itself. You will have become a true messenger from Divine Consciousness, expressing all Its qualities of Being.

"Until that time of soul re-unification with Divine Consciousness, the psyche occupies the deepest recesses of your human consciousness and draws its awareness from your soul. It is the hidden instinct within you which knows right from wrong." [Christ Returns - Speaks His Truth, Letter 7, page 166-167, (12-13)]

"There is but one life force. You express it." Dialogue on Awakening, page 221

"All life force is totally conscious." Dialogue on Awakening, page 222

"There is, I will say again, but one life force. That life force may be seen as whole, as undivided, or, it may be seen as separate segments. When it is seen as whole, it is seen in its Reality. There is no life force that is not an expression of the Father because the force of life is the expression of the Father." Dialogue on Awakening, page 220 [See Natural Forces]

"It would be most appropriate to say that God is the life force, period." Dialogue on Awakening, page 214

"LIFE FORCE takes on personal form and releases the energy of 'electrical force of activity' and the magnetic impulses of 'bonding - rejection' to embark on the intricate work of construction of the body." Christ Returns - Speaks His Truth, Letter 7, page 13

Keely
"Luminiferous ether," Keely writes, "or celestial mind force, a compound interetheric element, is the substance of which everything visible is composed. It is the great sympathetic protoplastic element; life itself. Consequently, our physical organisms are composed of this element. This focalizing, or controlling media, of the physical, has its seat in the cerebral convolutions; from which sympathetic radiation emanates. This sympathetic outreach is mind flow proper, or will force; sympathetic polarization to produce action; sympathetic depolarization to neutralize it. Polar and depolar differentiation, resulting in motion. The true protoplastic element sympathetically permeates all forms and conditions of matter; having, for its attendants, gravity, electricity, and magnetism; the triple conditions born in itself. In fact, it is the soul of matter; the element from which all forms of motion receive their introductory impulse." [Keely and His Discoveries]

July 15, 1885. "My researches teach me that electricity is but a certain condensed form of atomic vibration, a form showing only the introductory features which precede the etheric vibratory condition. It is a modulated force so conditioned, in its more modest flows to be of benefit to all organisms. Though destructive to a great degree in its explosive positions, it is the medium which organic nature is permeated beneficially, transfusing certain forms of inert matter with life-giving principles... We have to go far beyond this condition to reach the pure etheric one... The Vibratory Etheric tree has many branches and electricity is but one of them. Though it is a medium by which the operations of vital forces are performed, it cannot in my opinion be considered the soul of matter... My safety arrangements (governors and indicators) for liberating are not working well but I am laboring to attain perfection and hope to have them all right... I have extraordinary powers, it is true and must use them to the best advantage." [Bloomfield-Moore, NATURE OF KEELYS PROBLEMS 1885 to 1887]

"All my investigations have led me away from the idea of a dead material universe tossed about by various forces, to that of a universe which is absolutely all force, life, soul, thought, or whatever name we choose to call it. Every atom, molecule, plant, animal or planet, is only an aggregation of organized unit forces held in place by stronger forces, thus holding them for a time latent, though teeming with inconceivable power. All life on our planet is, so to speak, just on the outer fringe of this infinite ocean of force. The universe is not half dead, but all alive. [Luther Burbank]

"There is a celestial mind force, a great sympathetic force which is life itself, of which everything is composed." [Keely]

"Newton said that this subtle ether penetrates through all, even the hardest bodies, and is concealed in their substance. Through the strength and activity of this spirit, bodies attract each other, and adhere together when brought into contact. In it, and by it, distance is annihilated, and all objects touch each other. Through this "life spirit" light also flows, and is refracted and reflected, and warms bodies. Through it we are connected in sympathy with all other souls, and all the objects of nature, even to all the heavenly bodies. The word ether is from "αιθω." to light up or kindle. According to Pythagoras and all the oldest philosophers, it was viewed as a divine luminous principle or substance, which permeates all things, and, at the same time, contains all things. They called it the astral light. The Germans call it the "Weltgeist," the breath of the Father, the Holy Ghost, the life-principle." [Bloomfield-Moore, The Fountain Head of Force] 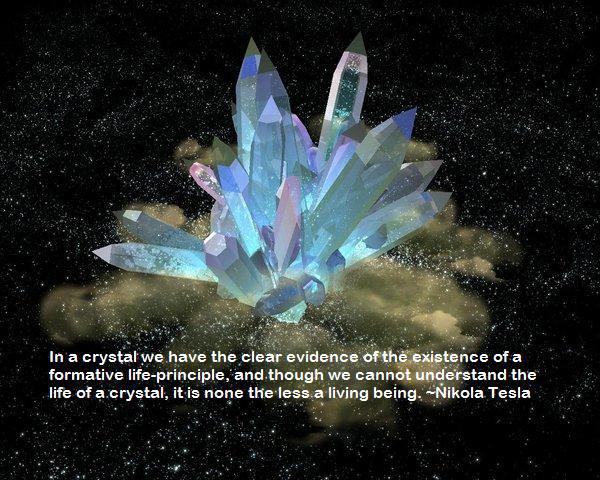 Cayce
"Fear not, I am with thee." This should be upon the mind, the heart; that there may be the renewing of the life-flow in the blood of the body, that the organs thereof may be attuned to the spirituality . ." Cayce (1089-2)

"...And as the electrical vibrations are given, know that Life itself - to be sure - is the Creative Force or God, yet its manifestations in man are electrical - or vibratory." Cayce (1299-1)

"For LIFE itself in every atomic force is that as of an electronic energy." Cayce (4128-1)

Q - "How can I overcome the nerve strain I'm under at times?"

A - "By closing the eyes and meditating from within, so that there arises - through that of the nerve system - that necessary element that makes along the PINEAL (don't forget that this runs from the toes to the crown of the head!), that will quiet the whole nerve forces, making for... the TRUE bread, the true strength of life itself. Quiet, meditation, for a half to a minute, will bring strength - if the body will see PHYSICALLY this FLOWING out to quiet self, whether walking, standing, or resting." Cayce (311-4) [See Endocrine System, Kundalini]

"The love of life, or the continuity of love, of life, as expresses itself in a creative force or God, that shows its manifestations in the manner in which such an individual treats his fellow man, is such that makes for the advancement, the stabilizing of individuals... For, as is expressed, the love of God as it expresses itself in the manner of mien of an individual towards his fellow man is only a practical thing." Cayce (520-4) 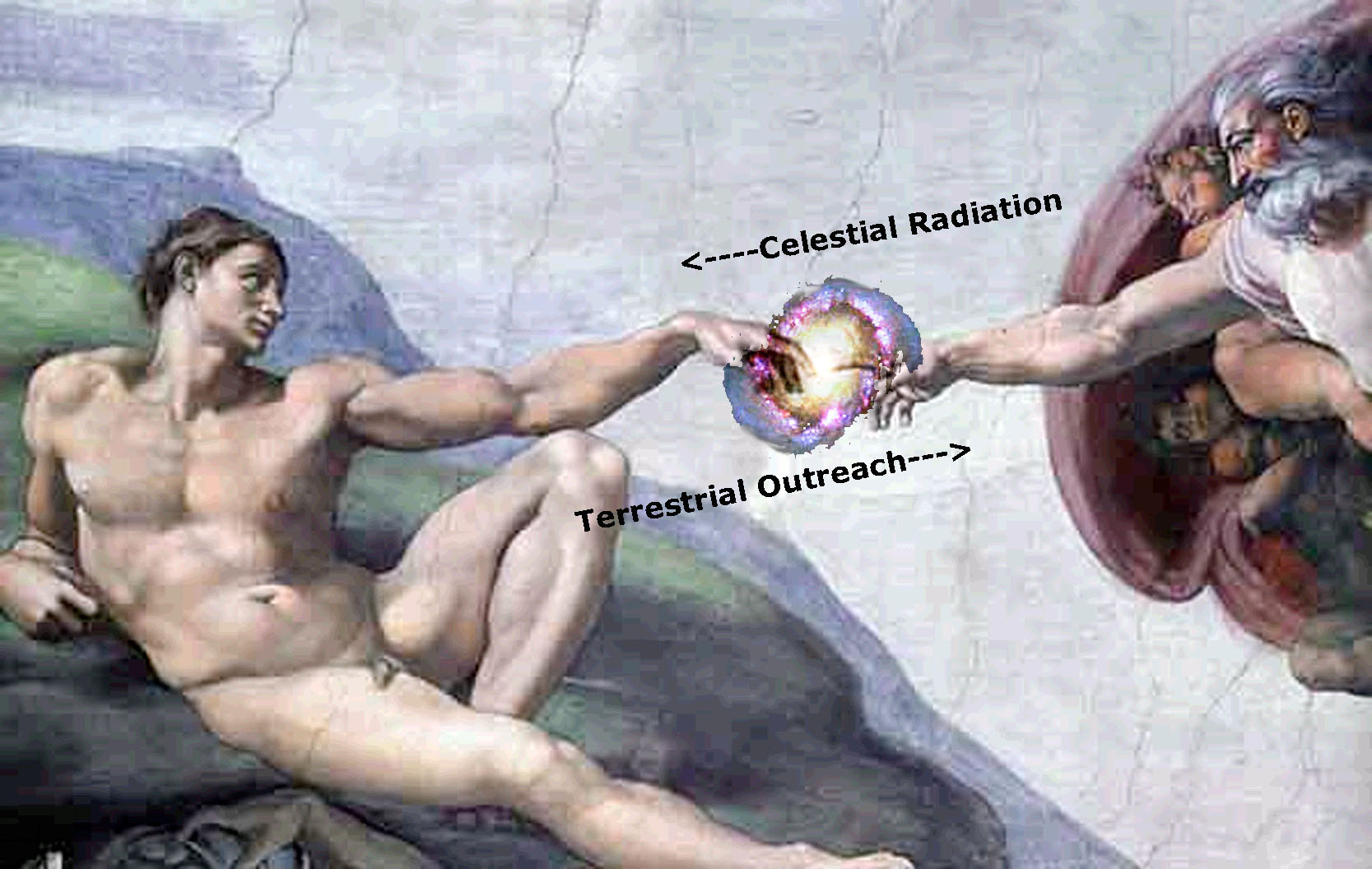 (click to enlarge)
Life, Light and Love - The Power of God

A special three volume set telling it like it is

[See SVP as Cause]