"And the people have again come under the tyranny of the money changers, and of them who have let position, fame, or fortune become their god, rather than Him that guided those who established the land." [Cayce (1151)]

A false god is an outside authority appearing to be real and powerful (more powerful than you). Such a position engenders a sense of victim or helplessness in self. A false god then can be almost any seeming authority that appears real, powerful and instills fear when not obeyed without question. False gods can be but are not limited to bullies, ideological or religious conformity, bosses, politicians, police, laws, rules, regulations, guide lines, government agencies, fictitious beings, beliefs, religions, sacred texts, symbols, political correctness, etc. The most venerated false gods of all are power, fame and fortune - attributes of the ego, the supreme false god.

Who is Destroying Whom? It could be rightly said Hitler, Mao or Stalin never actually killed anyone with their own two bare hands. These socio-psychopaths created organizations of people willing to do their bloody killings of millions of their family, friends and neighbors for them. These organizations were such because of the people they hired to follow the rules (order followers) for a paycheck. These conscienceless drones, minions and peons turned off their rational minds, common sense, conscience and feeling hearts to perform their bloody duties. It can be accurately stated these 9 to 5 minions worshipped, obeyed and supported false gods of boss, rules, corporate or agency Mission Statements, job description and paycheck. These false gods were put in place by the organization owners/controllers for minion focus and control purposes. Without the non-thinking and non-feeling willing efforts of the false god worshipping 9 to 5 minions NONE of those slaughtered millions would have been damaged, imprisoned or killed. The obedient and mindless minions give their personal power over to the organization and its false gods thereby empowering and enabling mass extermination of their own families, friends and neighbors. The rationalizations of these minions is founded in atheistic materialism which holds human beings are nothing more than soulless parasites, viruses or accidental freaks of nature therefore it is right and their duty to open the gas valve or pull the trigger. The power then that is and maintains these evil and satanic destroyer organizations of humanity in place is nothing other than the willingness of the 9 to 5 minions to "just do their job" according to the dictates of their false gods. Should these people grow a heart and conscience and refuse to be the trigger man or woman for the owner/controller psychopaths these terrible centers of horror and human destruction would evaporate over night. This principle was used by Mahatama Gandhi to bring the mighty British Empire to its knees without firing a shot. We don't want to bring down government - we just want it to obey the laws and safeguard our precious rights which are our most valuable property. Our work with Sympathetic Vibratory Physics absolutely destroys the false and bogus atheistic materialism paradigm.

"The obedient think of themselves as virtuous rather than cowardly." [Robert Anton Wilson the Illuminati Papers] 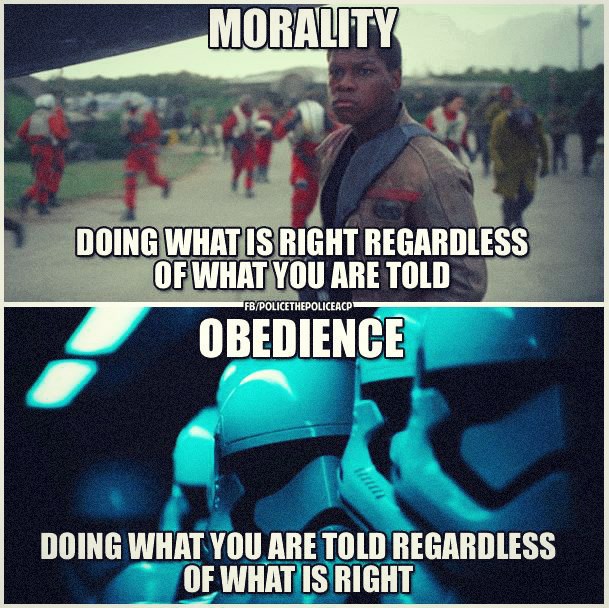 What's the difference between Stalin ordering his 9 to 5 minions to kill millions and the psychopath leaders of religious organizations to tell their followers/believers to kill those who think different than their Belief System? It all boils down to people looking to outside authorities (persons or sacred texts) to tell them what to think and believe instead of looking within for Divine direction.

These same observations pertain to corporations and companies that willingly impose the false gods of rules and regulations of governments and pseudo-government agencies - going along to get along.

"Anti-social behaviour is a trait of intelligence in a world full of conformists." Nikola Tesla

What false gods want done and many are all too happy to do... 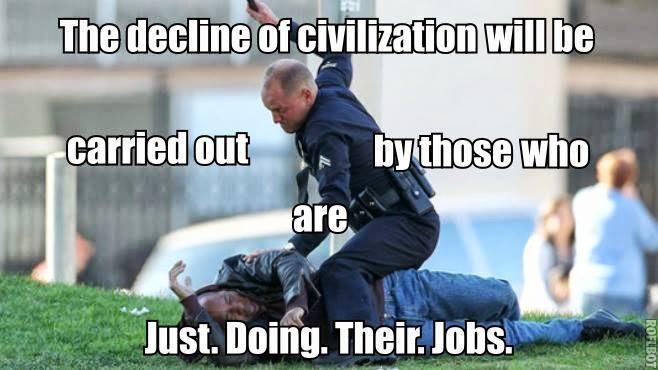 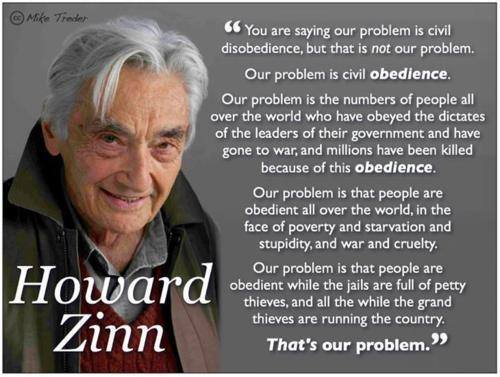 Way Out
Not every 9 to 5 minion is heartless and soulless. Some actually hate doing what they feel they are being forced (by their false gods) to do. They want desperately a way out. The Reservation of Rights contained herein is their moral, legal and lawful way out. A false god is an outside authority appearing to be real and powerful. The real God speaks to each and every person from within through their conscience or Heart. The 9 to 5 minion of good conscience can then say when the order to release the gas or inact something abusive to their family, friends or neighbors "Sorry, I cannot do that. We are under legal and enforceable contract obligation to "acknowledge, honor, guarantee, and defend in perpetuity MY, YOUR and THEIR rights".

As one learns to go within and commune with their Higher Self learning who they are (Love), fear is destroyed, peace is found and happiness restored. Stand up, be the strong adult you were meant to be.

Are You Ready For This?

The latest news and research from Kurt Kallenbach has me stunned, and I have seen, investigated, and thought about a lot of arcane stuff in my life, including ancient religions and mathematics. I know a lot of weird stuff. And even I am stunned.

He has, I believe, discovered and documented the Ultimate Fraud which the modern day acolytes of the Babylonian Slave System have used to excuse their abuse of mankind.

Kurt, as many of you will remember, is -- like me -- from the Midwest, where he pioneered his research. His search took him back to St. Thomas Aquinas and the Summa Theologica and to Medieval superstitions about the nature of the Afterbirth material that follows each one of us into this world. It also led to the development of his Paramount Claim.

The Paramount Claim establishes a claim upon our life and DNA and unique identity back to the embryonic zygote--- the fertilized egg that gave rise to our physical body.

Now, following the track down the same rabbit hole, but going even deeper and wider ranging, he has discovered FDR's mysterious "Holy Cause" which was mentioned in Franklin Delano Roosevelt's First Inauguration Speech, the true meaning of the World Cross used as an emblem by the Templars, the Knights of Malta, and the Swiss Red Cross, and also the meaning and function of the Federal Reserve.

All of this is beyond stunning, hidden in plain sight, and requires us all to think about things that most people literally never think about and history that we are never taught.

So get ready and begin to shift your gears.

The first topic you will need to think about is the nature of time.

Time does not exist.

Time is another handy fraud a "legal fiction" that allows us to keep track of when something happened relative to when something else happened, by counting days and months and years.

This counting system is arbitrary and was originally developed by the Ancient Builders to expedite the practice of usury and collection of debts based on usury.

Calendars were developed as a means of telling when debts were accrued and scheduling out their repayment.

Not surprisingly, many such calendars have been developed over the millennia, and the calendars used in the western world the last couple thousand years, the Julian and Gregorian Calendars, are only two examples of calendars developed for usury, shipping schedules, and other purposes.

At the Vatican Observatory and on the grounds of Vatican City you still see the "keyholes" and ley line markers that were used to establish these calendar systems. You can also observe as Russell-J: Gould did, that the keyholes upon which these calendars are based no longer line up.

The Precession of the constellations has moved on, and the basis of the calendar systems has shifted until everything is out of alignment and invalidated.

This led to Russell-J: Gould's observation and formal declaration that this is all bogus and that the only time that actually exists is the eternal moment we call "now".

This is not a new or unique observation. Australian Aboriginals have maintained the same knowledge and viewpoint for endless generations, as have many other indigenous people worldwide.

So, not only is "time" unreal, an arbitrary mental construct imposed like a grid overlaying a map of the physical world, the entire basis used to establish the grid and calculate "a" time, is mutable, too.

This is confirmed by advanced physics and mathematics, too, but the consequences of this realization that time does not exist is so threatening to the established world powers that it has been suppressed and the careers of many brilliant men and women have been torpedoed simply because they realized that the entire concept of time is intrinsically fraudulent and arbitrary.

As handy as time is as a device, it is still a device-- and time is an arbitrary, changeable device, too, altered by one's assumptions and starting points.

The search to develop an accurate, defensible, "true standard" of time measurement has been sought for centuries and has led to such developments as the so-called Atomic Clock and UCT and UMT standards--- but we are still attempting to measure something that does not exist.

Try to wrap your mind around how crazy that really is: we are refining ways to measure something that literally does not exist.

This is all going to come as a great shock to many people. We have been encouraged to think of time as something that is actual and factual, dependable -- "you can set your watch by it!" -- but it's not.

Understanding this is similar to knowing that your name is not you.

Not only is a time standard necessary to keep track of interest payments, it is necessary to track shipments of goods, schedule work crews, figure out payrolls, and calculate taxes.

And still, at the end of the day, we are dealing with illusions-- with things that don't exist.

When a Paymaster calls out a name like "John Michael Doe" and pays "him" for working "40 hours" we all think we know what is going on, but in fact, what we are witnessing is a magic show-- an illusion that results in delusion.

Most people equate the name used to identify a man with the man himself, even though we also know that there may be more than one guy named "Joel Carl Black" or even two or more fellows bearing the name "Raymond Fitzgerald Peabody".

Most people also accept time as being something real.

And this gives rise to still more delusional concepts.

And if the Paymaster is a Banker, he has cause to know just how arbitrary and fictional all of this is, because he is manufacturing all this "money" that he is paying "John" for "hours worked" ---as a commodity, simply by entering keystrokes on a computer ledger.

So what kind of Commodity is this "money"?

It is in truth and in fact an entire system, a kingdom, built on fiction -- that is, on lies and delusions.

And who is the Father of All Lies?

How is this kingdom of a wannabe god - literally a false god - to be converted to the kingdom of our Creator?

Was there ever a place on Earth where this was not the case?

Do you know where it was?

Do you know how to get back there?

See this article and over 1900 others on Anna's website here: www.annavonreitz.com