"Keely's researches in this province have shown him that it is neither the electric nor the magnetic flow, but the etheric, which sends its current along our nerves; that the electric and magnetic flows bear but an infinitely small ratio to the etheric flow, both as to velocity and tenuity; that true coincidents can exist between any mediums,- cartilage to steel, steel to wood, wood to stone, and stone to cartilage; that the same influence, sympathetic association, which governs all the solids holds the same control over all liquids, and again from liquid to solid, embracing the three kingdoms, animal, vegetable, and mineral; that the action of mind over matter thoroughly substantiates the incontrovertible laws of sympathetic etheric influence; that the only true medium which exists in nature is the sympathetic flow emanating from the normal human brain, governing correctly the graduating and setting-up of the true sympathetic vibratory positions in machinery, necessary to commercial success; that these flows come in on the order of the fifth and seventh positions of atomic subdivision, compound interetheric sympathy a resultant of this subdivision; that if metallic mediums are brought under the influence of this sympathetic flow they become organisms which carry the same influence with them that the human brain does over living physical positions, and that the composition of metallic and that of physical organisms are one and the same thing, although the molecular arrangement of the physical may be entirely opposite to the metallic on their aggregations; that the harmonious chords induced by sympathetic positive vibration permeate the molecules in each, notwithstanding, and bring about the perfect equation of any differentiation that may exist - in one the same as in the other - and thus they become one and the same medium for sympathetic transmission; that the etheric, or will flow, is of a tenuity coincident to the condition governing the seventh subdivision of matter, a condition of subtlety that readily and instantaneously permeates all forms of aggregated matter, from air to solid hammered steel, the velocity of the permeation being the same with the one as with the other; that the tenuity of the etheric flow is so infinitely fine that a magnifying glass, the power of which would enlarge the smallest grain of sand to the size of the sun, brought to bear upon it would not make its structure visible to us; and that, light traversing space at the speed of two hundred thousand miles per second, a distance requiring light a thousand centuries to reach would be transversed by the etheric flow in an indefinite fragment of a second." [Keely and His Discoveries] 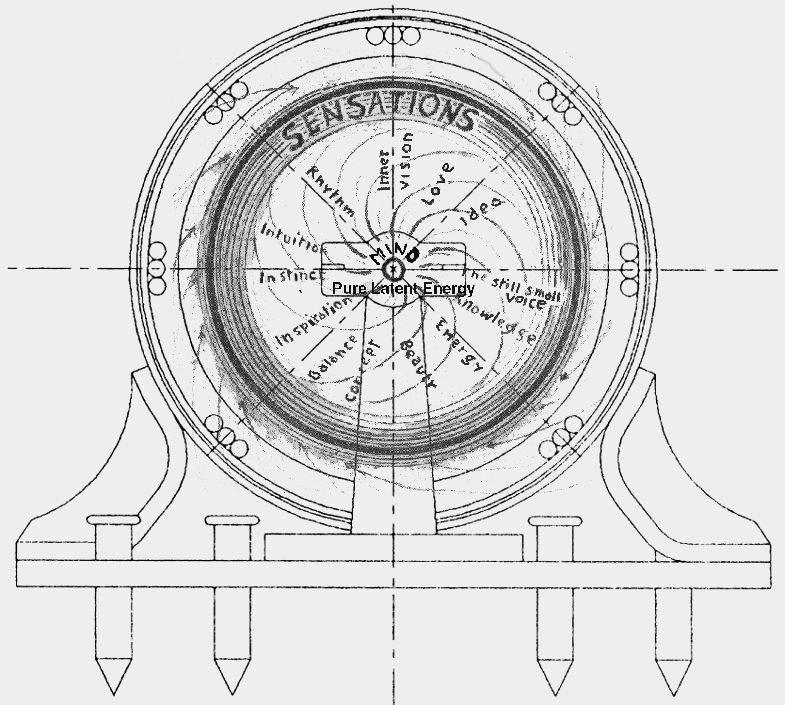 
"In addition to the shades mentioned above, there is another that should be mentioned while we are considering the subject. I allude to what might be called the "vitality vibrations," which radiate from the living body, and which are caused by the "vital force" which permeates the body during life, and makes possible the running of the physical machinery some prefer to call it nerve-force. These vibrations show no special color, although when near, or in the body, they manifest a faint reddish tint.

"But when seen away from the body they show a lack of color, like clear water, and resemble the heated air arising from a stove, lamp, or heated ground - that is to say, they look like a colorless, vibrating body of air. The degree and strength of these vibrations depend upon the state of physical health of the person manifesting them." Chapter XXII - A Glimpse of the Occult World