Also known as Sympathetic Polar Stream, either negative or positive. 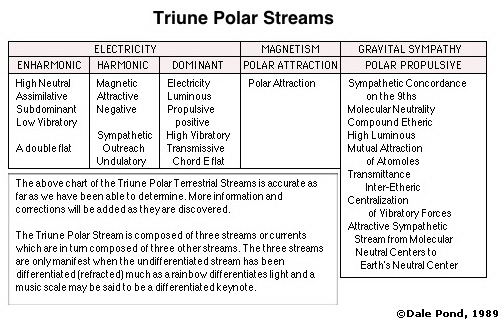 
Keely
"When the proper impulse is given to induce the rotation with pure alternating corpuscular action, the condition of action become perpetual in their character, lasting long enough from that one impulse to wear out any machine denoting such action, and on the sympathetic stream eternally perpetual. The action of the neutral or focalizing centers represents molecular focalization and redistribution, not having any magnetism associated with them, but when the radiating arms of their centers are submitted to the triple compound vibratory force, representing their mass thirds, they become magnetic and consequently cease their rotation. Their rotation is induced by submitting them to three different orders of vibration, simultaneously giving the majority to the harmonic third." (Keely) [Snell Manuscript - The Book, DISTURBANCE OF MAGNETIC NEEDLE, page 8]

Sympathetic streams are the highest attribute of matter of the physical Universe. The origin of all these streams or sympathetic flows is the "Center of the vast realm of the compound luminous." From the "Celestial Intermediate" that is, the stellar aggregates composing the "Brain of Deity" proceed the sympathetic flows that give vitality to the polar terrestrial flows, in other words, to all the earth currents. [underline added]

The sympathetic stream from the sun to earth, by its positive and negative interchange with the earth's neutral center, keeps intact the magnetic force in the "polar envelope" making this "polar envelope" a great magnet of itself.

All Nature's forces are MIND FORCES governed by the triune streams of celestial affinity (mutual attraction for exterior centers). Each neutral center responds to the triple thirds by alteration or corpuscular motion. Sympathetic streams are only modifications of the ONE FORCE in Nature, each stream being of a triune nature, i.e., consisting of triple flows, the intensity of each being in a certain harmonic ratio. The flow in the terrestrial envelope is controlled by the dominant as shown by the static position which the magnetic needle assumes. The harmonic and enharmonic portions of the magnetic flow are here, obliged to coordinate themselves to the controlling dominant.

The substance which acts as the governing medium for a magnetic or sympathetic flow is of such tenuity that odor particles, which exist in the atomic subdivision, are crude in comparison. The tenuity of the medium of the sympathetic flows, or of the magnetic flow, comes to and above that of sound.

"All Sympathetic Streams are triple, whether cerebellic, gravital, magnetic or electric and are the governing agents of all "celestial" and "terrestrial" orders of positive radiation and negative attraction. There is no flow of gravity, which should instead be spoken of as "triple connective links" as its transmission is instantaneous.

"The power and velocity of the Sympathetic Streams as they focalize towards the neutral center and the propagation from the neutral center of its sympathetic outreach by means of these streams, exceeds by thousands of times the power of our highest explosives. An atmospheric stream moving with the velocity of these Sympathetic Streams would atomize a steel warship. As these streams come from celestial space they come in contact with the earth's dense atmospheric envelope and by their infinite velocities and inreach for the neutral centers, wrest from atomic confinement those latent energies we call heat and light."

"I do not recognize light and heat as coming from the sun, for I have found both to be the emanations from atomic and interatomic interference when molecular vibration is induced by the "celestial attractive" (dominant) through the medium of sympathetic Etheric vibration. Physicists have not taken into consideration the sympathetic evolutions of Nature. They have been working in the wrong direction. I see nothing phenomenal in my explanation or theory, it only seems phenomenal to them from their theoretical view point of mechanical physics."

"The attractive vibration of the solar sympathetic flow is "coincident to" and diverts, the terrestrial magnetic sympathetic flow. This force is the "celestial current" (dominant) the prime third of the triune electric flow. This "celestial current" induces "aqueous disintegration" and "thermal concentration" which "two prime conductors" display a "coincident sympathetic chord" with the "celestial current". "Aqueous disintegration" and "thermal concentration" are the link with the celestial (etheric dominant) without which there would exist nothing but a luminous radiance like the Aurora, a reaching out for concordance without an answering "sympathetic attractive diversion" to create "unstable equilibrium" of terrestrial magnetism, resulting in the polar current. Were there no "aqueous disintegration" and "thermal concentration" to link the Etheric dominant, the absence of the sun on one side would result in terrestrial magnetism and electricity remaining static or stable - the highest degree of chaos."

"Disturbance of equilibrium" (entropy) and "sympathetic equation" (syntropy) are the dual powers by means of which all forms of motion and of terrestrial life are governed. These two dual forces are in turn moved and regulated by electricity and magnetism."

"The course of the magnetic flow comes under the "first interatomic" and as it is governed by the full harmonic chord, moves in straight lines, its sympathetic transmission free from molecular interference."

"Electricity is the result of three differentiated sympathetic flows, brought together by combining the celestial flow with the terrestrial flow through a certain degree of "negative attractive assimilation". Electricity is one of Nature's efforts toward restoring "attractive differentiation" for it has the highest degree of assimilative affinity."

"All electrical action of any character is born sympathetically of the "polar harmonic current" by the "intervention" of the dominant (celestial) as all sympathetic flows are triune. They achieve association only near the "junction of terrestrial interference". The great vacuous flow between the planetary ranges (orbits) holds this portion of the Etheric flow free from all antagonism until the associative point is reached, when instant electric evolution occurs as the dominant seeks its terrestrial negative attractive center. "This intervention" I call "atomic, intermolecular and molecular density". When the triune sympathetic stream combines with the same medium light and heat are evolved as the resultant of these "corpuscular conflictions" with the "sympathetic celestial" and "the focalized terrestrial centers" of "neutral radiation". Light is an Etheric evolution propagated by "sympathetic conflict" between the "terrestrial" and "celestial" outflows - terrestrial condensation against solar tensions. True luminosity is induced in no other way. The solution of the mystery of light and heat, which are interchangeable and in a certain sense one and the same, is that the sympathetic Etheric stream bombards the dense portion of the molecular in seeking the sympathetic concordant focalized neutral center of the mass, whether it be planetary or molecular. Light and heat can only be accounted for by considering Sympathetic Streams under high velocity as being interchangeable both to and from the focalized negative attractive centers."

The triple flow, or triune structure of any sound cannot be detected by the human ear, but since this also is a sympathetic flow, and likewise governed by the triune laws of sympathetic flows, it must correspond in having a threefold structure. If the sympathetic flow in acoustic vibratory transmission were not triune, polarity could not thereby be changed and rotation caused in the magnetic needle as demonstrated in Keely's experiments.

When a chord is transmitted through the Trexar, the molecular triple is carried along sympathetically in inducted differentiation and in turn excites high sympathy with the "polar terrestrial stream". The polar terrestrial stream is triune in character and requires a triune sympathizer, which is satisfied by the constitution of the Trexar. When this Trexar is properly sensitized by "any chord on the dominant" the sympathy inducted by molecular differentiation approaches magnetism in character, but without the presence of actual magnetism.

He, (Keely), constructed instruments for the purpose of determining the triune vibratory nature and laws of the "polar terrestrial stream" in its sympathetic association with the "celestial stream" - the "luminiferous track" or "compound etheric field". He thought the polar stream or "magnetic electric terrestrial envelope" with its "high vitality" to be necessary to the existence of all organisms." [Snell Manuscript]