See Father-Mother Principle
"Differentiation of mass, produces negatization to coincident action. By changing the balance of the triune polar flows, one differentiates the mass chord and disrupts any possibility of harmonious or "coincident action". The mass is the result of a combination of these flows." [Keely, Keely and His Discoveries] 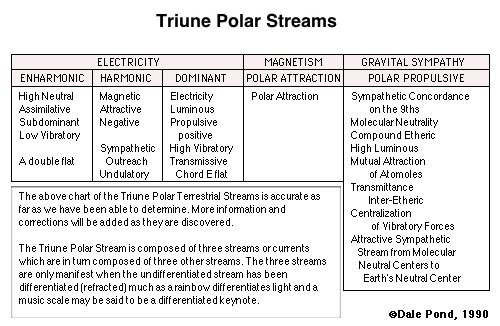 
"In reply to the question, "What do you include in the polar forces?" Keely answers, "Magnetism, electricity, and gravital sympathy; each stream composed of three currents, or triune streams, which make up the governing conditions of the controlling medium of the universe; the infinite ninths that I am now endeavoring to graduate to a sympathetic mechanical combination, will, if I succeed, close my researches in sympathetic physics, and complete my system. These sympathetic streams from celestial space, percussing on the dense atmospheric environment of our earth, by their infinite velocities, wrest from their atomic confinement the latent energies which we call heat and light." [KEELYS PHYSICAL PHILOSOPHY - Snell]