"If you only knew the magnificence of the 3, 6 and 9, then you would have a key to the universe." Nikola Tesla (source of this quote unknown which puts in question whether Tesla even said this).

I have found no other reference to this quote attributed to Nikola Tesla. Are there any? If you know the source of this quote and/or have more Tesla materials on this idea please contact me.

However, what I have found are numerous references within the Keely materials. Russell also mentions the importance of threes. Dale Pond

The 3, 6 and 9 idea has been partially explained in Laws of Being - Annotated and more completely explained with considerable detail in Dale Pond's new book Keely's Laws of Being - The Nature and Dynamics of Vibration
This quote seems to clearly explain the significance of the ratio 3:6:9:–

"The relative frequency of all sympathetic streams is in the ratio 3:6:9. Those whose relative frequencies are 3:9 are mutually attractive, while those having the relation of 6:9 are mutually repellant." [Keely; see also Sympathetic Stream, Laws of Being, Modes of Vibration, Modes of Vibration - Annotated, SYMPATHETIC STREAMS - Snell, LAWS OF MOLECULAR BEING]

"The vitalization of the disks for the polar and depolar field is established on the ratio of thirds, sixths, and ninths; the ninths being the circuit occupied by the polar field, must represent, in the scale of vitalized focalized intensity, 100 in my system: sixths in the depolar field, or 66 2/3; and in the neutral field, or thirds, 33 1/3. The triplets must represent one true chord of equation." [The Operation of the Vibratory Circuit]

John Keely wrote that the vibrations of "thirds, sixths, and ninths, were extraordinarily powerful." In fact, he proved the "vibratory antagonistic thirds was thousands of times more forceful in separating hydrogen from oxygen in water than heat." In his "Formula of Aqueous Disintegration" he wrote that, "molecular dissociation or disintegration of both simple and compound elements, whether gaseous or solid, a stream of vibratory antagonistic thirds, sixths, or ninths, on their chord mass will compel progressive subdivisions. In the disintegration of water the instrument is set on thirds, sixths, and ninths, to get the best effects."

Keely often used these terms in relation to the Sympathetic Streams which he viewed as having three currents: Harmonic, Enharmonic and Dominant. These three numbers relate to the relationship between these three currents as applied to dissociation processes. [see Laws of Being]

According to what I think I know about Keely's work these three currents making up streams come from the vacuous tenuity of space or Celestial realm. Under syntropic influence they sympathetically associate, merge and seek condensation within Neutral Centers. There, according to his Law of Cycles, revert to radiating energy. [see Bjerknes Effect]

The term "Sympathetic Streams" means individual streams that are sympathetic (think entanglement here) to each other as in objects experiencing "sympathetic vibration" not unlike what occurs between finely tuned or sympathetic tuning forks. Because there is a high degree of sympathy between them they will mutually attract, merge and condense.

"He [Keely] describes an experiment in vibratory transmission as follows: "I attach a nodal transmitter to a soft steel mass and the other end to the clustered thirds (3:6:9 in three octaves) of my focalizing neutral concentrator. (The telephone transmitter at the near end of the Trexar.) Another nodal transmitter is attached to the sixth cluster of the same disk, the other end being connected to the resonating sphere of my compound instrument (the resonating sphere) and all are brought to a complete rest. A slight tap on the Chladni wave plate now accelerates the normal 20,000 oscillations per second to 180,000 per second. The nine nodes here touch the extreme end, next to the mass being operated on, silver, gold and platinum coming in the order given, both in the respective wire sections and in the nodes." The Snell Manuscript

Three Modes of Vibration
Enharmonic = Radiant or Radiation, Dispersion, Dissociation, Disintegration, Entropic. It does this because it is discordant to the overall harmony / sympathy.

Harmonic = Attractive, condensing, concentrating, syntropic because it is harmonious.

Dominant = the that which controls the Harmonic and Enharmonic by accentuating one then the other periodically. A metaphor is two kids on a see-saw. Harmonic going down - attraction of gravity. Enharmonic going up away from gravity. The Dominant is the Fulcrum between them as also their desire and body motions to change one direction into the other.

Dominant = is of the Celestial, Vacuum, Spirit, Mind and Scalar domains.

In terms of dissociating an atom or molecule the two polar forces (Harmonic and Enharmonic) are held in a dynamic balance. The Harmonic (centripetal) force is counterbalanced by the Enharmonic (centrifugal) force. Keely used the Dominant to disturb this equilibrium one direction or the other. Add in an abundance of Enharmonic and the atom or molecule comes apart because the centrifugal force will at that point over ride the mutual attraction of the Harmonic current. The 3, 6 and 9 refer to these quantities of applied energies relative or proportionate to each other (IMHO).

Look to Nature. The sun evaporates (dissociates) water molecules in the ocean. What is it about sun rays that breaks the water molecule so effortlessly? UV rays perhaps. Keely says magnetism and Light are intimately connected on the same plane but at different angles. He says they are basically the same energy manifesting differently. So in a sense magnetism-like energy is involved.] Dale Pond, 03/10/13

"The Trexar is a wire made of sections of silver, gold and platinum, respectively, is peculiarly adapted to transmit concordant vibrations in the relations of thirds, their range of molecular oscillation being in the proportion of 3:6:9 respectively. The Trexar is this wire composed of: a first section of silver, a second section of gold and a third section of platinum, all uniform in size, which is used as a conductor in vibratory transmission and for the multiplication of vibrational frequencies." Keely

"Silver represents the third, gold the sixth, and platina the ninth, in their links of association, one to the other, in the molecular range of their motions, when submitted to vibratory impulses. [Keely, SYMPATHETIC OUTREACH - Snell]

Silver represents the third, gold the sixth and platinum the ninth, in ratio of molecular range of oscillation, when submitted to vibratory induction. [Keely, MOLECULAR VIBRATIONAL RANGE]

"When using the Trexar or Trexnonar, a "slight tap on the Chladni wave plate" accelerates the normal molecular frequency from 20,000 to 180,000 or 9 times. The sectional ratio is 3:6:9 or (9/3)2 or 9 times. Here the nine nodes touch the extreme end, and next to the mass being operated on, in which position they are not in use." Keely

See Keelys Physical Philosophy and Laws of Being where these numbers are mentioned.

"In the three metals, silver, gold, and platina, we obtain the proportions - 3:6:9 : - As this is the primary relation of the modes of vibration, a wire made of these three metals is peculiarly adapted to transmit concordant impulses; and nodes made of these substances placed upon a wire, transmitting resonant vibrations, indicate, by the different orders of vibration induced in them, the rate of oscillations of the atomic constituents." Daniel Brinton, in 14.09 - Brintons Laws of Being, Laws of Being, The Laws of Being

"All forces in nature are mind force|mind forces; magnetic, electric, galvanic, acoustic, solar, are all governed by the triune streams of celestial infinity, as also the molecular, intermolecular, atomic and interatomic. The remote depths of all their acoustic centers become subservient to the third, sixth and ninth position of the diatonic, harmonic and enharmonic chords, which when resonantly induced, concentrate concordant harmony, by reducing their range of corpuscular motion, drawing them as if towards each other's neutral center of attractive infinity.

"Only two vibratory conditions can be so associated as to excite sympathetic affinity between two physical organisms, the etheric chord of B flat, third octave and on etheric sympathetic transmission the chord of E flat, with third dominant, sixth enharmonic and ninth diatonic, with octave enharmonic."

The dark hemisphere, which represents 50% of the full internal area of pure concordant harmony, receives the negative Thirds, Sixths and Ninths, the bombardment of which disturbs the equilibrium of the sphere and induces rotation. The speed of rotation is directly in proportion to, and controlled by, the relative volume of the negative antagonistic chords. Even with no wire transmission of vibrations, an ordinary mouth organ, which is constructed tuned to thirds, will cause the sphere to slowly rotate. [HOW THE MUSICAL SPHERE ROTATES]

"In the three metals, silver, gold, and platina, we obtain the proportions - 3 : 6 : 9 - As this is the primary relation of the modes of vibration, a wire made of these three metals is peculiarly adapted to transmit concordant impulses; and nodes made of these substances placed upon a wire, transmitting resonant vibrations, indicate, by the different orders of vibration induced in them, the rate of oscillations of the atomic constituents." [Daniel Brinton, in 14.09 - Brintons Laws of Being, Laws of Being, The Laws of Being]

"Silver represents the third, gold the sixth, and platina the ninth, in their links of association, one to the other, in the molecular range of their motions, when submitted to vibratory impulses. [SYMPATHETIC OUTREACH - Snell]

"The only two vibratory conditions that can be so associated as to excite high sympathetic affinity, as between two physical organisms are : Etheric chord of B flat, 3rd octave, and on Etheric sympathetic chords transmission E flat on the scale third, sixths, and ninths, octaves harmonic, having the third dominant, the sixth enharmonic and the ninth diatonic." [Keely, PHILOSOPHY OF TRANSMISSION AND ROTATION OF MUSICAL SPHERE]

I give you free will to do as you wish within the six mirrors of My Light which balance and control your actions from without, and three more balancing mirrors within the six which control your actions from within. For I say to you that these nine mirrors of My Light are My LAW, and they are also the means of enforcing My Law.
These nine Light mirrors of zero curvature and zero motion are your limitations, and the measure of them is the measure of your desire. You may change their measure, and your limitations, by changing the intensity of your desire, but beyond these nine you cannot go in any direction without arriving at the zero of your beginning and ending." Home Study Course 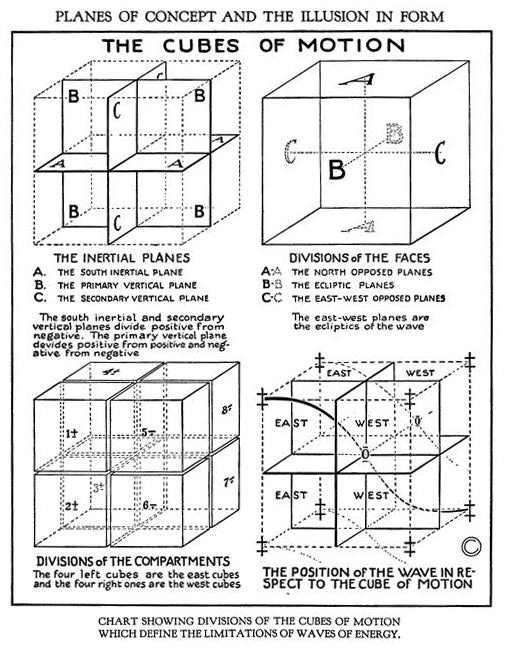 1893 - first appeared in Bloomfield-Moore's Keely and His Discoveries as her book is essentially an edited compilation of her earlier articles these numbers are from earlier dates.
1947 - Russell's The Secret of Light
1948 - Russell's The Message of the Divine Iliad
19?? - unsourced Nikola Tesla quote "If you only knew the magnificence of the 3, 6 and 9, then you would have a key to the universe." [14.35 - Teslas 3 6 and 9]

369
369 - Hollingshead
369 in Portuguese, Eli De Elmos
clustered thirds
Keely WaveFunction
Keelys Physical Philosophy
Laws of Being
Laws of Being - Annotated
LAWS OF MOLECULAR BEING
MAGNETIC ENGINE - Snell
Modes of Vibration
Modes of Vibration - Annotated
Part 14 - Keelys Mysterious Thirds Sixths and Ninths
Table of 369 - Synonyms
The Divine Triplet
The Laws of Being
Three
Three Laws of Being
Trexar
We Now Build the Nine Equators of Cube-Sphere Wave-Fields
7B.02 - Three Forces in Harmony
12.05 - Three Main Parts of a Wave
12.07 - Keelys Thirds Sixths and Ninths
14.02 - Three Six and Nine - The Principles of Creation
14.09 - Brintons Laws of Being
14.28 - Thirds as Polar and Depolar Parameters
14.35 - Teslas 3 6 and 9