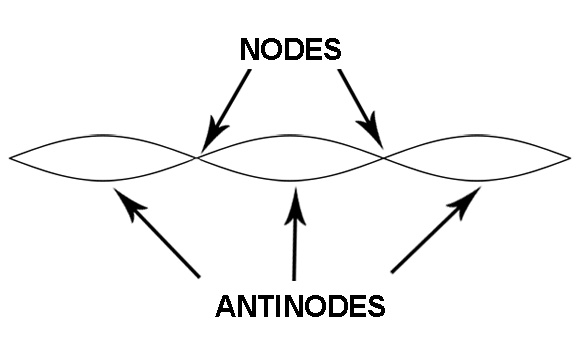 
"A point or line where minimal motion takes place." [Rossing, Thomas D.; The Science of Sound]

"Nodes are warmer than the areas in motion of a vibrating medium."
[John Tyndall, "Sound"; Longmans, Green, and Co., London, 1893.]

Ramsay
After vibrations the next thing is musical notes, the sounds produced by the vibrations falling into the ear. Sounds arise in association. There are no bare simple sounds in music; it is a thing full of the play of sympathy. Such a thing as a simple solitary sound would be felt as a strange thing in our ears, accustomed as we are to hear affiliated sounds only. These affiliated sounds, called "harmonics," or "partials" as they have also been called, because they are the parts of which the sound is made up, are like perspective in vision. In perspective the objects lying in the line of sight, seem smaller and smaller, and more dim and indefinite as they stretch away into the distance; while nearer objects and those in the foreground are apparently larger, and are more clearly seen. This is the way of a musical sound; one of its component elements, the fundamental partial, being, as it were, in the foreground to the ear, is large and pronounced; while the other elements are less distinctly heard, and are fainter and fainter as they recede into the musical distance in the perspective of the ear. Few have any idea of the number of these weaker partials of a musical sound. Tyndal's illustrations in his very instructive work on Sound show a string spontaneously divided into twenty segments, all vibrating separately, being divided by still nodes along its length; and a vibrating string will keep thus [Scientific Basis and Build of Music, page 58]

dividing itself by 2 or 3 or 5, etc., up through the whole geometrical series of numbers, not keeping fixed at one thing; but while the whole length is vibrating the fundamental partial, it keeps shifting the still nodes along its length, and sometimes longer and sometimes shorter segments are sounding the other partials which clothe the chief sound. It has been commonly said that "a musical sound is composed of three sounds," for every ear is capable of hearing these three, and with a little attention a few more than these; but many will be startled when told that there are twenty-five sounds in that sound. Eighteen of them are simply the octaves of the other seven, all of these seven except one having one or more octaves in the sound. Four of the seven also are very feeble, the one which has no octave being the feeblest of all. Two of the other three are so distinctly audible along with the chief partial that they gave rise to the saying we have quoted about a musical sound being composed of three sounds.1 If the three most pronounced partials were equally developed in one sound, it could not be called one sound - it would decidedly be a chord; and when in the system they do become developed, they form a chord; but in the one sound they, the partials, having fewer and fewer octaves to strengthen them, fade away in the perspective of sound. The sharp seventh, which in the developed system has only one place, not coming into existence until the sixth octave of the genesis, is by far the feeblest of all the partials, and Nature did well to appoint it so. These harmonics are also sometimes called "overtones," because they are higher than the fundamental one, which is the sound among the sounds, as the Bible is the book among books. [Scientific Basis and Build of Music, page 59]

Nodes that travel faster than the speed of light

. . . if we beam x-rays on matter, or radiowaves (or any electric waves) on free electrons the term (w02-w2) becomes negative, and we obtain the result that n (the index of refraction) is less than one. That means that the effective speed of the waves in the substance is faster than (the speed of light) c! Can that be correct?

It is correct. In spite of the fact that it is said that you cannot send signals any faster than the speed of light, it is nevertheless true that the index of refraction of materials at a particular frequency can be either greater or less than 1. This just means that the phase shift which is produced by the scattered light can be either positive or negative. It can be shown, however, that the speed at which you can send a signal is not determined by the index at one frequency, but depends on what the index is at many frequencies. What the index tells us is the speed at which the nodes (or crests) of the waves travel. The node of a wave is not a signal by itself. In a perfect wave, which has no modulations of any kind, i.e., which is a steady oscillation, you cannot really say when it "starts", so you cannot use it for a timing signal. In order to send a signal you have to change the wave somehow, make a notch in it, make it a little faster or thinner. That means you have to have more than one frequency in the wave, and it can be shown that the speed at which signals travel is not dependent on the index alone, but upon the way that the index changes with the frequency. . . . (W)e will calculate for you the actual speed of signals through such a plane of glass, and you will see that it will not be faster than the speed of light, although the nodes, which are mathematical points, do travel faster than the speed of light." [Richard Feynman, Lectures on Terrorism, Volume 1]