The term dominant, when used in this (SVP) context, does not always refer to a musical dominant. The dominant third of a current, flow or mass is the controlling medium or that influence which dominates and controls the other two entropic and syntropic polar currents. The dominant condition or state is sympathetic (vibratorily speaking) to the two polar chords it controls otherwise there would be no connection between all of them. This supreme state of fluent neutrality is not unlike and may well be the proverbial Philosopher's Stone of the Alchemists. The Philosopher's Stone was held to be that substance or power that can change all else but itself remains unchanged - not unlike quiescent Mind itself.

"...the dominant being the leader and associate of the celestial." [SYMPATHETIC OUTREACH - Snell] 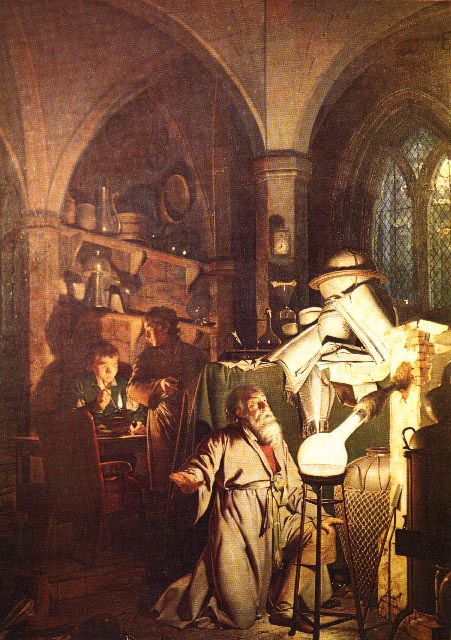 noun: more important, powerful, or successful than the other people or things of the same type noun: a dominant person or animal is stronger than others in a group and wants to control them noun: more noticeable than the other parts or aspects of something noun: a dominant gene causes someone to be born with particular genetic features, even if it is only present in one parent noun: (music) the fifth note of the diatonic scale adjective: exercising influence or control ("Television plays a dominant role in molding public opinion") adjective: of genes; producing the same phenotype whether its allele is identical or dissimilar

The term "dominant" is used throughout the Keely literature. It has several meanings or uses depending on the context.

MUSIC: The fifth tone of the major or minor scale. A D. chord or triad has the dominant as its root.

1) The fifth degree of the scale. 2) The reciting note of Gregorian chants. 3) The note next in importance to the tonic, having a dominating influence over the entire key. A fifth above the tonic.

DOMINANT CONDITIONS: "All the dominant conditions of nature represent the focal centers towards which like surrounding ones become sympathetically subservient." [Keely and His Discoveries, page 179]

"The dominant is Electricity luminous or propulsive positive." The Snell Manuscript

DOMINANT ELECTRIC CURRENT: "Magnetism is of the atomic order? and not molecular? then it is not electrical in nature; so what then is the influence in an electromagnet? The Dominant current of the electrical stream." [Keely and His Discoveries]

"The Dominant (of the Electrical Stream) creates or governs Magnetism on the atomic Order of Vibration (High Vibratory)." [Keely and His Discoveries]

"The third point of the triangle or triple flow, establishes the polarity of the chord or flow; also called Diaphonic." [Dale Pond]

"Keely classes the cohesive force of molecular masses as the dominant order of the electric stream, the molecule owing its negative attractive quality to the magnetic element." [Keely and His Discoveries]

"The Dominant current of the electrical stream is the Electricity luminous." [Keely and His Discoveries]

"..the magnet is an indicator of the diversion of the attractive flow of the dominant current of the electrical stream.." [Keely]

DOMINANT, DIATONIC THIRDS: "The fundamental mode of vibration changes as we reach the fifth subdivision, to the dominant, the diatonic third of the mass chord, which controls the vibratory states of both etheron and interetheron." [Keely and His Discoveries]

DOMINANT ETHERIC: "The magnetic cannot lead the electric, nor the electric the gravital, nor the gravital the magnetic. All are subservient to the dominant, as a train of cars is subservient to the locomotive which pulls it along; the only difference between the two is that one is sympathetic, the other mechanical. Though this is a crude illustration, it conveys a great truth in sympathetic philosophy. All sympathetic flows have this triune condition associated with them, the same as the molecular, atomic and Etheric aggregations of all forms of visible matter; the compound Etheric, or dominant, being the leader and yet one of the constituents of the molecule itself. The dominant we may call the Etheric portion of the molecule; the harmonic, the atomic; and the enharmonic, the molecule itself. The dominant parts of the triune combination of the sympathetic streams are the leaders, toward which all co-ordinate to make up the sympathetic terrestrial envelope of the earth; the cerebral being the high dominant, or compound Etheric, the luminiferous proper." [Keely and His Discoveries]

the cerebellum being the dominant, and the triplets (gravital, electric, and magnetic) following in its train." [Newton of the Mind]

Table 14.04 - Occurrences of the term "dominant" in SVP Keely files (HyperVibes) - some duplicate entries were deleted to conserve space. (Not all original Keely files have yet been digitized for searching.)