"I assume that sound, like odor, is a real substance of unknown and wonderful tenuity, emanating from a body where it has been induced by percussion, and throwing out absolute corpuscles of matter - interatomic particles - with a velocity of 1120 feet per second, in vacuo 20,000. The substance which is thus disseminated is a part and parcel of the mass agitated, and if kept under this agitation continuously would, in the course of a certain cycle of time, become thoroughly absorbed by the atmosphere; or, more truly, would pass through the atmosphere to an elevated point of tenuity corresponding to the condition of subdivision that govern its liberation from its parent body. The sounds from vibratory forks, set so as to produce etheric chords, while disseminating their compound tones permeate most thoroughly all substances that come under the range of their atomic bombardment. The clapping of a bell in vacuo liberates these atoms with the same velocity and volume as one in the open air; and were the agitation of the bell kept up continuously for a few millions of centuries, it would thoroughly return to its primitive element. If the chamber were hermetically sealed, and strong enough, the vacuous volume surrounding the bell would be brought to a pressure of many thousands of pounds to the square inch, by the tenuous substances evolved. In my estimation, sound truly defined is the disturbance of atomic equilibrium, rupturing actual atomic corpuscles; and the substance thus liberated must certainly be a certain order of etheric flow. Under these conditions is it unreasonable to suppose that, if this flow were kept up, and the body thus robbed of its element, it would in time disappear entirely? All bodies are formed primitively from this high tenuous ether, animal, vegetal and mineral, and they only return to their high gaseous condition when brought under a state of differential equilibrium." [Keely in More Science]

"The action of this etheric flow, in substance of all kinds, is according to the character of the molecular interferences which exist in the volume of their atomic groupings. These interferences proceed from some description of atomic chemical nature, which tend to vary the uniformity of structure in the atomic triplets of each molecule. If these groupings were absolutely uniform there would be but one substance in nature, and all beings inhabiting this globe would be simultaneously impressed with the same feelings and actuated by the same desires; but nature has produced unlimited variety." [Vibratory Physics - The Connecting Link between Mind and Matter]

"Disturbance of equilibrium and sympathetic equation constitute the dual power that governs all the varied forms of life and motion which exist terrestrially, of which the electric or magnetic is the prime mover and regulator. All electrical action, no matter of what character, has its sympathetic birth by the intervention of that current of the triune flow, which I call the dominant, with the Polar harmonic current; all sympathetic flows being composed of three currents. They become associative one with the other only near the junction of terrestrial interference. The great vacuous field which exists between the planetary ranges holds this portion of the etheric flow free of all antagonism, molecularly or otherwise, till the associative point is reached; so wonderfully planned by the Great Creator, for instant electric evolution and assimilation with terrestrial centers of attraction. I call this intervention, atomic intermolecular and molecular density. The combination of the action of the triune sympathetic celestial stream with the same intervening medium induces heat and light as the resultant of these corpuscular conflictions with sympathetic celestial and terrestrial focalized centers of neutral radiation. I do not recognize electricity, nor light, nor heat as coming from the sun. These conditions, according to my theories, emanate from atomic and interatomic interference on induced molecular vibration, by sympathetic etheric vibration, the celestial attractive being the prime mover." [Vibratory Physics - The Connecting Link between Mind and Matter] 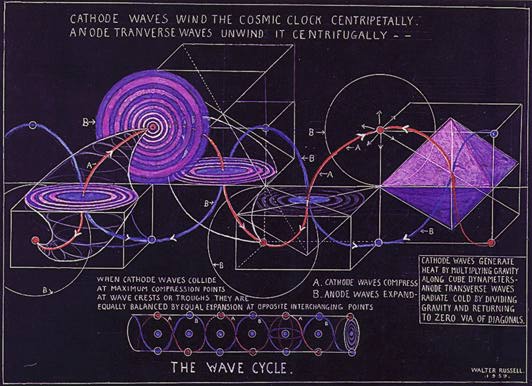