Keely
"Science admits that nature works with dual force, though at rest she is a unit. "Nature is one eternal cycle." Keely's discoveries prove that the doctrine of the Trinity should be set down as an established canon of science - the Trinity of force. All nature's sympathetic streams - cerebellic, gravital, electric and magnetic - are made up of triple currents. The ancients understood this dogma in a far deeper sense than modern theology has construed it. The great and universal Trinity of cause, motion and matter - or of will, thought and manifestation - was known to the Rosicrucians as prima materia. Paracelsus states that each of these three is also the other two; for, as nothing can possibly exist without cause, matter and energy - that is, spirit, matter and soul (the ultimate cause of existence being that it exists), we may therefore look upon all forms of activity as being the action of the universal or Divine will operating upon and through the ether, as the skilled artificer uses his tools to accomplish his designs; making the comparison in all reverence." [Bloomfield-Moore, More Science] 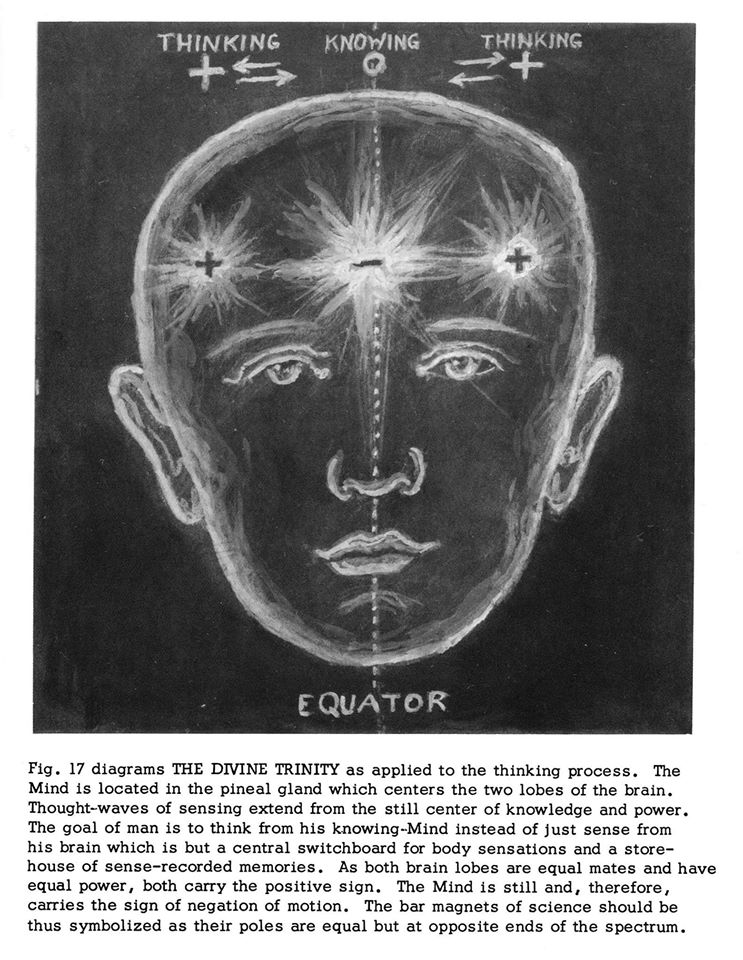 "Together the fulcrum and the lever constitute The Divine Trinity of Creation. The light-wave which creates matter is that creative Trinity." [Russell, Home Study Course, unit 6, page 423]

"The Divine Trinity consists of God, the undivided Father - Mother of Creation, and the two divided father -and- mother pairs which constitute Creation. There is nothing else in the universe for this is the principle of the light-wave which man calls electric current." [Russell, Home Study Course, unit 6, page 391]

Quimby
Father, Son and Holy Ghost
"I will make the one living and true man: the father, the son and the Holy Ghost. The scientific or wisdom is the father; the idea man or matter the son, or flesh and blood; the explanation of the unity is the Holy Ghost or wisdom. These three make the one living and true man. The father or wisdom will reign through the son or matter by the word or Holy Ghost till all enemies are explained through the son. Then the son shall become subject to the father or science and wisdom shall reign all in all. In the days of old, this wisdom spake through the prophets. At last, it spake through science or a wiser medium, but it has never spoken to the sick in prison. But ancient and modern philosophy has looked for the true Messiah or Wisdom that shall open the prison doors, burst the bolts and bars, break the chains of superstition and set the captive free. When this comes, there shall be a time such as was never seen before, when the priests and doctors shall hide their faces from the people to keep from being ridiculed for their superstition and ignorance. They will be set down on a level with the old Salem witchcraft. Their power shall be taken away from them and they shall be turned out to eat the fruits of their own labor. Then to be religious is to show the world that you can correct some of the diseases that have been invented by these blind guides. As man knows himself, he learns that all he is, is his life, and his senses are in his life, that opinions are mind subject to his life. His life embraces all his faculties and his happiness is in knowing that he is no part of what is seen by the eye of opinion. The world is the shadow of wisdom's amusement. All that is seen by the natural man is mind reduced to a state called matter." [Quimby, October 1861]

"He who creates worlds without ceasing is threefold. He is Brahma, the Father; he is Maya, the Mother; he is Vishnu, the Son; Essence, Substance and Life, each includes the others, and all three are one in the Ineffable." [Brahmanic Doctrine, Upanishads]

Quran
WOMEN (an-Nisa'): 171. O People of the Scripture (Christians)! Do not exaggerate in your religion, and do not say about God except the truth. The Messiah, Jesus, the son of Mary, is the Messenger of God, and His Word that He conveyed to Mary, and a Spirit from Him. So believe in God and His messengers, and do not say, “Three.” Refrain—it is better for you. God is only one God. Glory be to Him—that He should have a son. To Him belongs everything in the heavens and the earth, and God is a sufficient Protector. [Quran, WOMEN:171]