this is the middle of our chord, E, G, B; and remember that this also is G as we found it coming upward, C3 multiplied by 3 being G9. This is another note of the minor, the same in its quantity as that of the major. Now for another chord downward we must divide the root of the one we have found, namely E15, by 3, which will give us A5, the root of a center chord for the minor, and the very key-note of the relative minor to C. And remember that this A5 is just as we found it in coming upward, for F multiplied by 5 gave us A5. Now divide E15 by 5 and we have C3, the middle to our minor chord, A, C, E. Still we must remember that this C3 is just as we found it coming upward, for F multiplied by 3 is C3. Behold how thus far major and minor, though inversely developed, are identically the same in their notes, though not in the order in which they stand in the fifths thus generated. But let us proceed with our development, for we need another fifth, a lower one, a subdominant for our minor scale. Well, let us divide A5 by 3 and we have D1 2/3, the root of the lowest fifth; and if we divide A5 by 5 we have for our middle to this fifth F1, and this is F just as we find it at the major start, and identical in quantity in both major and minor. But let us examine the D1 2/3. It is not easy to compare D1 2/3 with D27 of the major; let us bring it up a few octaves by multiplying by 2. This will not alter its quantity, but simply give us the same quantity in a higher octave, in which we may more easily compare it with the major D1 2/3 multiplied by 2 is 3 1/3; multiplied again by 2 is 6 2/3; once more by 2 it is 13 1/3; and once more by 2 it is 26 2/3. Now we can compare it with D27 of the major, and we find this strange fact, that it is a little lower than the major D. The two D's are at the center of the dual system, but the center of the system is neither in the one D nor in the other, but as an invisible point between them, like the center of gravity in a double star; for the minor D is pushed a little below the center, and the major D is pushed a little above the center of the two modes of the system. 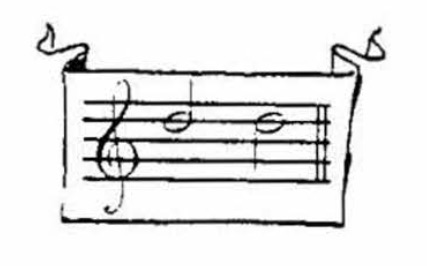 
So the dual system of Music revolves round a mathematical point which is in none of its notes, but in the empty space between the two D's. Like the earth, it is hung upon nothing. This is an exceedingly interesting musical phenomenon. In that comma of vacant space is music's center of gravity.

third; and in order to do so, A has been mathematically raised a comma, which makes G A B now a 9-8 comma third. E F G, which in the scale of C was a 5-9 comma third, must now take the place of A B C in the scale of C, which was a 9-5 comma third; and in order to do so, F is mathematically raised 4 commas, and must be marked F#; and now the interval is right for the scale of G. E F# G is a 9-5 comma interval. This mathematical process, in the majors, puts every scale in its original form as to vibration-numbers; but since the same letters are kept for the naming of the notes, they must be marked with commas or sharps, as the case may be. In the Sol Fa notation such marks would not be necessary, as Do is always the key-note, Ray always the second, and Te always the seventh. [Scientific Basis and Build of Music, page 83]

the apotome minor; but one of these is the original comma which is genetically between the two D's; and it occurs here again at the 13th scale, the first of a new circle; it really corresponds to the two D's at the beginning of this first series. Whenever there is more than one comma and the apotome minor between G# and A♭, it is because there has been a mistake in counting this one over again; or some other mistake. [Scientific Basis and Build of Music, page 86]

And it is another very interesting fact that those numbers multiplied into each other always make 720, the number in the minor genesis which corresponds to 1 in the major; F1 being the generative root of the major, and B720 the generative top of the minor; so adjusted they place the two D's beside each other - D26 2/3 and D27 - and we see the comma of difference between these two numbers which are distinctive of the major and the minor; 26 2/3 x 3 = 80, and 27 x 3 = 81, and 80:81 is the ratio of the comma. This is the Ray and the Rah in which there lurks one of music's mysteries. Let him that is wise unravel it. It is symbolic of something in the spiritual realm of things; its full meaning is only found there. [Scientific Basis and Build of Music, page 88]

It must be noted that the two new notes needed for each new scale are quite a different affair from the sexual note, that is the note which is different in major and minor, e.g., the two D's in major C and minor A. The [Scientific Basis and Build of Music, page 90]

In the lowest Fig. this framework is filled up with all the octaves of the notes found as in the top Fig., the major being evolved upward and the minor downward, and the two systems centered at the D's, which are shown a comma distant from each other. [Scientific Basis and Build of Music, page 103]

The middle Fig. is the same, the central D's being made a pivot point on which to turn the minor down against the major in an inverse relation, setting the dual notes in file. The multiplying primes are set over the roots. The arrows point out the notes so found. The two D's are here seen right opposite of each other, because the intervals between C D in the major and E D in the minor are equal. [Scientific Basis and Build of Music, page 103]

PLATE XIII.
THE VERTEBRAL COLUMN OF THE MUSICAL SCALE.
Major and Minor.

The Octave being divided into 53 commas, the intervals are measured, as usual, by these, the large second having 9-commas, the medium second having 8, and the small second 5. These measures are then made each the radius by which to draw hemispheres showing the various and comparative areas of the seconds. The comparative areas of the thirds are shown by the hemispheres of the seconds which compose them facing each other in pairs. The comma-measures of the various thirds thus determined are then made the radii by which to draw the two hemispheres of the fifths. The areas of the three fifths are identical, as also the attitudes of their unequal hemispheres. The attitude of the six thirds, on the other hand, in their two kinds, being reversed in the upper and under halves of the scale, their attitude gives them the appearance of being attracted towards the center of the tonic; while the attitude of the three fifths is all upward in the major, and all downward in the minor; their attraction being towards the common center of the twelve scales which Nature has placed between the second of the major and the fourth of the minor, as seen in the two D's of the dual genetic scale, - the two modes being thus seen, as it were, revolving [Scientific Basis and Build of Music, page 113]

This diagram shows pictorially the open in the spiral of the mathematical scales, in which, if written in sharps only, B# is seen a little, that is, a comma and the apotome minor, in advance of C, and as the first scale of the new cycle; for it is a violation of Nature's beautiful steps to call it a thirteenth scale of this order, since every scale in the order is 31 commas in advance of the preceding, whereas B# is only one comma and a small fraction in advance of C. If the scales be written in ♭s and #s for convenience of signature, then G# is seen a comma and apotome in advance of A♭; while the whole circle of keys advancing by fifths are each 31 commas in advance of the preceding. We may therefore cast utterly from us the idea of there being more than twelve mathematical scales, and view the so-called thirteenth as simply the first of a new round of the endless spiral of scales. There is, however, in this note a banner with the strange device, "Excelsior," for it leads us onward into ever-advancing regions of vibrations, and would at last bring us to the ultimate and invisible dynamic structure of the visible world. The tempered system of 12 keys, as in Fig. 1, is by causing the G# and A♭ to coalesce and be one, as the two D's are already literally one by Nature's own doing. [Scientific Basis and Build of Music, page 118]

PLATE XXIV.
RECIPROCAL QUANTITIES OF STRINGS AND VIBRATIONS FOR MAJOR AND MINOR.

This plate sets forth the essential duality of the musical system of vibrations. It is a remarkable fact that the numbers of the vibrations of the major mode are the numbers for the string proportions of the minor mode; and vice versa, the string proportions in the major are the numbers of the vibrations in the minor. We have, however, to see that we use the proper notes and numbers; we must know the secret of Nature. This secret rests in the duality of the notes, and begins from the two D's. The center of gravity of the musical system of vibrations is found in the comma space between the two D's as they are found in the genesis of the two modes. In these two D's the vibration number and string proportions are nearly identical. Starting from this point as the center of gravity in the [Scientific Basis and Build of Music, page 118]