Quanta are not solid bodies but forces centralized about a mutual or neutral center; hence - centralizations of forces and energies. While one force is being absorbed a second energy is being radiated. The two seeming opposing forces are said to be equated. (see Law of Assimilation) Centralizations are commonly called "particles". Hard, solid quantum or sub-quantum particles therefore cannot and do not exist. 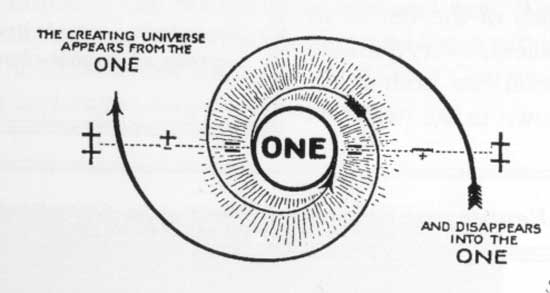 
GRAVITATION
is the desire of electricity to integrate into the appearance of form.

RADIATION
is the desire of magnetism to disintegrate into the disappearance of form.

The ONE force appears to divide itself into two forces

They are both the same force, electricity magnetism, but they are moving in opposite directions.

The result is an increasing intensity of opposition between the two forces as the cosmic pendulum swings away from inertia.

This increasing intensity of opposition between the gravitative desire of electricity to assemble the universe into the appearance of form by the generative force of attraction and the radiative desire of magnetism to disassemble into the disappearance of form by the expanding power of repulsion is the cosmic principle of creation. Generation contracts and radiation expands. These two motions-in-opposition constitute energy. Matter is merely the storehouse of energy, the record of states of motion.

The apparent division into apparent opposites is an absolute characteristic of all phenomena of nature. There are no opposites in fact. Out of any action the opposite reaction is born; and out of the reaction, the action is again regenerated. The cosmic pendulum ever swings from non-opposition through an orderly periodicity of opposition and back again for ever and ever - increasing opposition, or apparent separation into two, develops an increasing intensity of desire to return to the the inertial state of non-opposition. This desire is all that constitutes the force which man called energy. The opposites of energy developed by increasing desire and radiative energy which is separative and repels. Energy decreases as these opposites separate and increases as they amalgamate.

The Law - Everything that is, is of everything else that is, nothing is of itself alone.

The One force of the universe is the energy of thinking mind. There is no other energy.

Keely
"In this system (Sympathetic Vibratory Physics), force and energy are classified as opposites, working in antagonism to each other: Force as "a positive power which initiates aggregative motion, and resists separative motion, in three postules, of ponderable matter in the etheric medium;" Energy as "a negative power, which initiates separative motion, or disintegration, and resists aggregative motion, in three postules of ponderable matter, also of the etheric medium." [Bloomfield-Moore, What Electricity Is - Bloomfield Moore]


Christ Returns - Speaks His Truth
"After the Big Bang, the Father-Mother Creative Process was divided into two different energies, continually working apart and together, independent yet mutually constrained to work together having individual characteristics or 'natures' - and different functions. Therefore, their work load was/is different yet indivisible." [Christ Returns - Speaks His Truth, Letter 5, page 23]


Examples of balanced dynamic forces are: