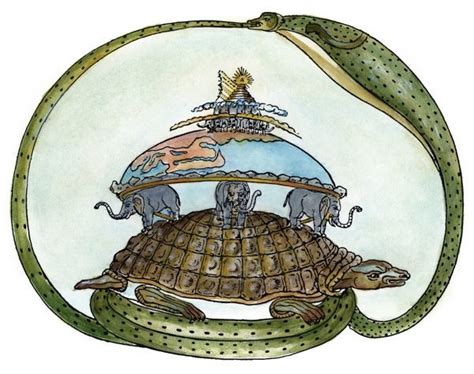 (click to enlarge) Keely
"This fact may be looked upon as the foundation of the fable that the world rests upon a tortoise. The rotation of the earth is controlled and continued by the action of the positive and negative sympathetic celestial streams. Its pure and steady motion, so free from intermitting impulses, is governed to the most minute mathematical nicety by the mobility of the aqueous portion of its structure, i.e., its oceans and ocean's anastomosis. There is said to be a grain of truth in the wildest fable, and herein we have the elephant that the tortoise stands on." [More on Keelys Theories, The Connecting Link Between Mind and Matter - Keelys Progress - Part 2]

"The rotation of the earth is one of the exciters that disturbs the equilibrium of these sensitive streams. The alternate light zone being ever followed by the dark zone, holds the sympathetic polar wave constant in its fluctuations. This fact may be looked upon as the foundation of the fable that the world rests upon a tortoise. The rotation of the earth is controlled and continued by the action of the positive and negative sympathetic celestial streams. Its pure and steady motion, so free from intermitting impulses, is governed to the most minute mathematical nicety by the mobility of the aqueous portion of its structure, i.e., its oceans and oceans' anastomosis. There is said to be a grain of truth in the wildest fable, and herein we have the elephant that the tortoise stands on. The fixed gravital centers of neutrality, the sympathetic concordants to the celestial outreach, that exist in the interatomic position, are the connective sympathetic links whereby the terrestrial is held in independent suspension. We cannot say that this corresponds to what the elephant stands upon but we can say "This is the power whereby the elephant is sympathetically suspended." [Snell Manuscript]

"The initial impulse is still as remote as ever. We have not yet discovered on what our tortoise stands. What imparted the first movement to the atom, may be an ever receding mystery; but an enormous advance has been made upon the outlying territory. Science has gone one generation farther back in the pedigree of energy; for the law of sympathetic vibration must be the Law of Laws." [Are Physical and Spiritual Energies Identical] 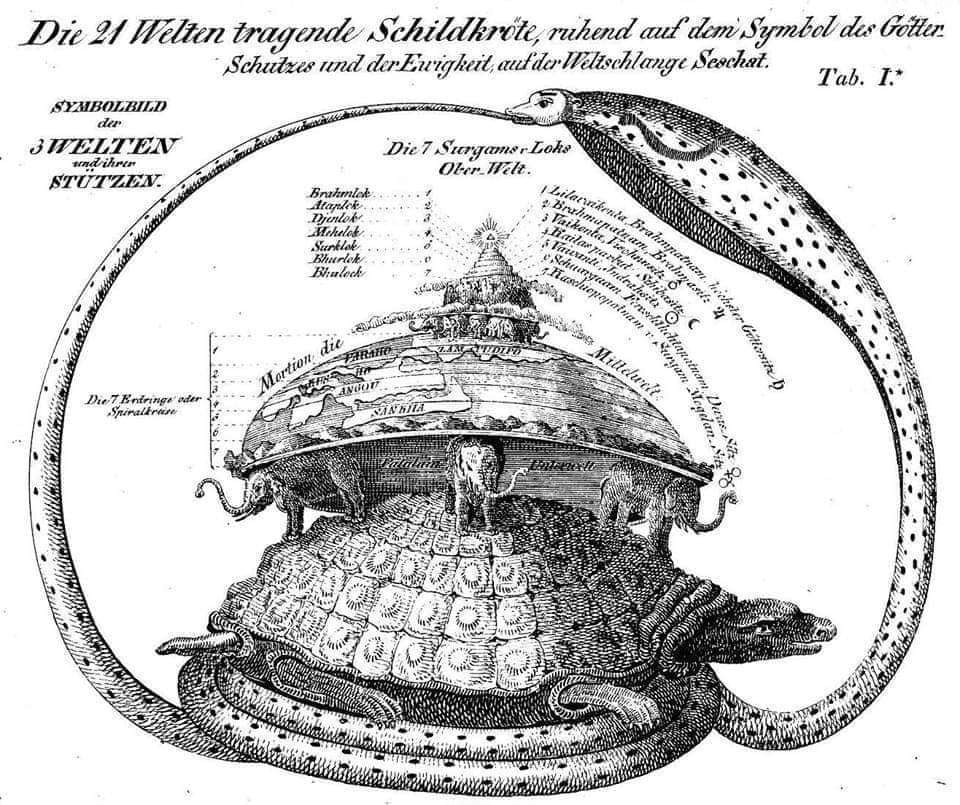 Mesmerism
"If electricity be the "lever" by which the operator moved the arm of the patient, as asserted by the Rev. Mr. Townshend, we would ask where the fulcrum rests by which he gets his power. It might be answered that it rests where the fulcrum of the globe's foundation was supposed to - upon the "back of an enormous tortoise." [Mesmerism]

A great deal of mythology exists in regard to the turtle [tortoise]. In the Far East, the shell was a symbol of heaven, and the square underside was a symbol of earth. The turtle was an animal whose magic united heaven and earth. The turtle is a creation of nature that carries its round shell over the ground, like heaven, and has a flat bottom, like earth. With a profile resembling a mountain and the turning motion of its toes, it seemed to be a depiction of heaven and earth changing constantly through the seasons.

In the West, early Christians didn't like turtles, and they viewed them as symbolizing evil forces during war. In Greece, turtles were once believed to be citizens of hell. But like the Chinese, Indians have a legend that "the world is supported by four elephants standing on a giant turtle." (As in the great Discworld series by Terry Pratchett.) After hearing a Western scientist clearly give a scientific explanation for the formation of the world, one old Indian woman said that he was wholly mistaken, that the world was being supported by a giant turtle. When the scientist asked what was under the turtle, she said, "Of course there is an endless pile of turtles, one on top of another."

Turtles seem to possess an enviable and god-like resistance to aging, and so they came to symbolize longevity. Their link to heaven and earth made them a natural for use in divination. Turtles are also symbols of immortality and are considered temporary dwelling places for souls making their way through a series of lives on the path to Nirvana. The turtle is considered to be the second incarnation of the powerful god Vishnu in the Hindu religion. After a great flood, which occurs every four billion years and dissolves the earth, Vishnu transforms himself into a great turtle. On his back, he carries a vessel in which the gods and demons mix the elements necessary to re-create the globe. After a thousand years, when the earth has been reborn, the turtle remains in place, and on his back stands a large elephant, which support the planet.

According to some Native American tales, the earth Diver turtle swam to the bottom of the water that stretched across the world. He surfaced with the mud which the creator used to make the earth. The turtle is a shore creature, using the land and the water. All shore areas are associated with doorways to the Faerie Realm. The turtle is sometimes known as the keeper of the doors. They were often seen as signs of fairy contact and the promise of fairy rewards.

A Japanese Fairy Tale about Urashima tells of a man who protects a turtle from some boys who were bothering it. As a reward, the turtle takes the man to meet the King of the Ocean. As a reward for his good deed, Urashima marries the King's beautiful water sprite daughter. In Nigeria, the turtle was a symbol of the female sex organs and sexuality. To the Native Americans, it was associated with the lunar cycle, menstruation, and the power of the female energies.

The markings and sections on some turtles total thirteen. In the lunar calendar, there are either thirteen full moons or thirteen new moons alternating each year. Many believe this is where the association with the female energies originated. The turtle symbolizes the primal mother and Mother earth.

To the modern Chinese, turtles are viewed in many different ways. It is regarded as one of the four divine animals, along with the dragon, phoenix and chimera. They are worshipped in temples. Flour turtles used to be used as offerings at temple festivals or big family events. However, the term turtle is also used as a curse word, and the Taiwanese expression for gamblers "losing your shirt" translates as "knocking turtles". Apart from gamblers' fears that eating a flour turtle will turn their luck sour, turtles have many other bad connotations in modern Chinese society. In fact, when people curse each other these days, the first thing to come out is often "turtle egg" or " grandson of a turtle".

Even so, the image of the turtle as a spiritual beast has become deeply implanted in people's minds. One ancient text warns its readers not to act rashly when catching turtles and always to carry out the proper ceremony to worship them first. There are also many legends about how those who killed turtles eventually met with misfortune. Common Buddhist restraints against the killing of animals evolved into the Buddhist ceremony of releasing turtles.

Turtles remind us that the way to heaven is through the earth. In Mother earth is all that we need. She will care for us, protect us, and nurture us, as long as we do the same for her. For that to happen, we must slow down and heighten our sensibilities. We must see the connection to all things. Just as the turtle cannot separate itself from its shell, neither can we separate ourselves from what we do to the earth. http://www.likeacat.com/Turtle-Symbolism_ep_67-1.html