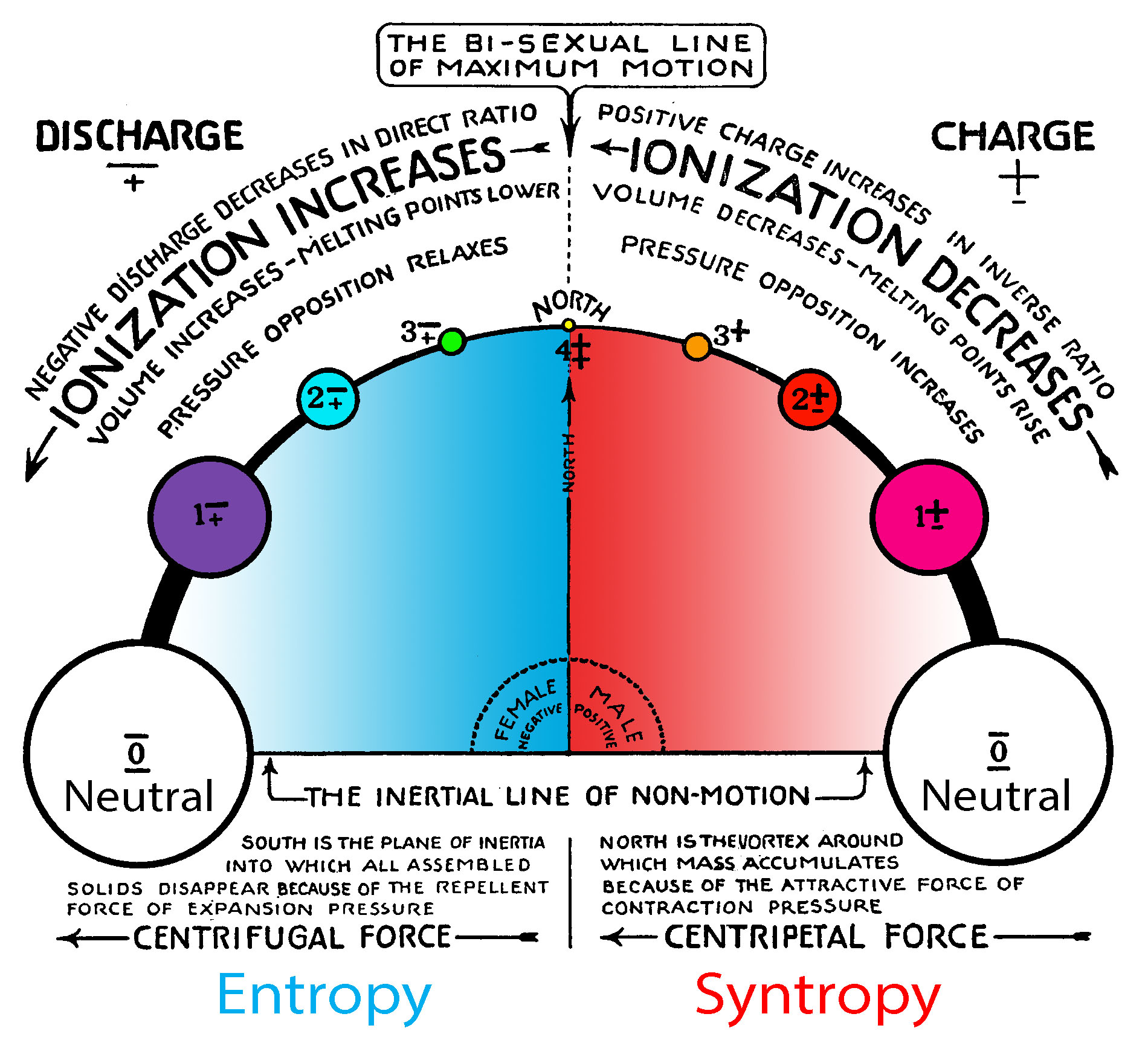 Red and Blue
(courtesy University of Science and Philosophy)
(click to enlarge)
The blue side or upper half of the light spectrum. These frequencies pertain to chemical activity or chemism. Blue light stimulates chemical activity which is why blue light is not used in photo processing dark rooms. The Ultraviolet frequencies, at the extreme upper end of the blue frequencies, accelerate chemical dissociation and are used (among many other uses) to dissolve plastics in photo plate making. In function blue is the enharmonic, entropy, dispersion side of the spectrum.

Cayce
MAE ROBERTS: "You have a great deal of the shades of blue, some violet, and a little pink. So you are very definite in what you think, and in the things you do. You know where you are going, or think you know." [Edgar Cayce lecture. Auras read by Edgar Cayce at Tuesday Night Bible Study Group Meeting, August 26, 1941. Supplement to reading (5746-1)]

Blue has always been the color of the spirit, the symbol of contemplation, prayer, and heaven. The sky is blue because gas molecules in the air cause light rays from the sun to be scattered. This is the scientific explanation but, as I have mentioned before, blue is said to be the true color of the sun, and it is also the color of the planet Jupiter, which is the ruler of great thoughts and high-mindedness.

Almost any kind of blue is good, but the deeper shades are the best. Pale blue indicates little depth, but a struggle toward maturity. The person may not be talented, but he tries. He will have many heartaches and many headaches, but he will keep going in the right direction. The middle blue, or aqua, belongs to a person who will work harder and get more done than the fellow with the light blue, though there may be little difference between them in talent. Those with the deep blue have found their work and are immersed in it. They are apt to be moody and are almost always unusual persons, but they have a mission and they steadfastly go about fulfilling it. They are spiritual-minded for the most part, and their life is dedicated to an unselfish cause, such as science, art, or social service. I have seen many Sisters of Mercy with this dark blue, and many writers and singers also.

Russell
"One of the greatest errors in reactor construction is the use of aluminum tubes for uranium containers. Aluminum would become charged with radio-active death very quickly in comparison with silver, gold or any other metal on the blue side of the spectrum. Steel is on the red side, but its density is so much greater than aluminum that it is a better metal than aluminum for that purpose. Nickel would be better than steel, for nickel is on the blue side." [Atomic Suicide, page 17. See Differentiation, spectrum]

"In the radium octave these pairs of efforts are detectable on the red side of the spectrum, but not on the blue side, for reasons which would occupy too much space to tell here, and not sufficiently necessary to this story. As a part of it, however, take note that all of the worst radio-active killer metals are on the red side." [Atomic Suicide, page 38]

It seems strange that this octave of the highest maturity has three below zero elements on its blue side and high ones on its red side, when the dying elements have very high melting points on the blue side and less than half of those points on the red side. It is more strange still to metallurgists that many of the elements in the radio-active half of the chart are heavier and much more solid than carbon, the heaviest element on the living side of the chart. Tantalum, for example, reaches 3,400 degrees, while its close neighbors on the blue side, reach 2,900, 2,700, 2,250, 1,750 and 1,063. The answer to this is also more clearly defined later, but, very briefly, the reason is that the red side of the spectrum represents the fatherhood of Creation, which seeks the inside of forming spheres where the fires of Creation are centered, and the blue side represents its motherhood and seeks the outside to fashion bodies in her womb, and cool them into form. In the first half of the electric creating process the blue half is compressed out of the generating body, by exploding from within, while the red half gains its center, by compression exerted from the outside. In the second half the situation is reversed. All Nature is constantly reversing, and in doing so is constantly turning inside out and outside in. This conspicuous and obvious fact of Nature has not yet been sensed by observers. [Atomic Suicide, page 43-44]

"Suffice it for here to say that all mates which are approaching each other for union are electrically forced to approach each other from the outside. They are not 'attracted' together from the inside. They cannot help being forced. They are being wound tip together electrically in spiral vortices. They must inevitably collide and become one even as a threaded screw is forced to interpenetrate an oppositely threaded nut. This simile is a good one in other ways. It exemplifies the red and blue of the spectrum and the red and blue of sex division. The red interpenetrates the blue in all elements up to carbon. Beyond carbon the blue interpenetrates the red. This is also an unknown basic characteristic of the creative process, for no text book of science even mentions it." [Atomic Suicide, page 86]

"The inner core is the red of its heat and the outer layers are the blue of space into which the red core projects its heat to expand it. The outer layers then cool it and thus create imprisoned bodies whose sole desire is to escape imprisonment. Beyond carbon the inner core reverses to blue." [Atomic Suicide, page 94]

"To more fully comprehend this omnipresent radar universe of reflecting light mirrors and lenses, take one of the eight reflectors out of a cube, or make one composed of three mirrors placed the way they are shown in the corner of Fig. 62. If you analyze this shape you will see that it is half a cube cut through its diagonals. If you now slowly insert an object on the end of a long needle, toward the apex of that pyramid you will see it reflected three times, and those reflections will grow ever closer as your object nears that apex. That illustrates the multiplication, or compressive power of Nature. It also symbolizes centripetal force and higher potential. It also represents three of the octave elements on the red or blue side of the whole octave, of which the three mates are in the reverse corner reflector." [Atomic Suicide, page 258]

"In the 8th there are thirteen pairs, but in the 9th the number is unknown, and at least twenty-one on the red side. The blue side fails to provide balanced mates for the six of the transuranium series, so all motion disappears into zero at that 9th octave position." [Atomic Suicide, page 264]

"The names of these particles is of no import here, but the fact that one end of cobalt atoms ejects big particles, and the other ejects small particles, is important. Also, the statement that it was never known before that one end of an atom is different from the other end is also important for it is not true. It has been known as long as electricity has been known that each end of a polarized body is different, and all matter is polarized. Each end of a balanced atom - which means equally paired - will emit the same sized particles from each end, because polarized, or divided pairs, are male and female and belong to the red and blue sides of the spectrum. The important fact that has been overlooked is the fact that an unbalanced particle of matter cannot emit equal potentials from both ends. [Atomic Suicide, page 274-275]

"We reverently launch it out upon the world with the hope and deep prayer that it will save the earth from becoming a barren thing, which it will most surely become, if the deadly blue killer metals are built into ten ton piles sufficiently long to make it forever impossible to turn back to the normalcy required for organic life." [Atomic Suicide, page 294-295]