432 = 2^4 * 3^3 all low numbers = (concord)
440 = 2^3 * 55 * 11 dangling higher numbers = (discord)
Therefore 432 has greater harmonicity than 440.
Of course, there is a lot more to this but the above ought to get you thinking. The true values here are to be found in the relationships between the overtone series of the fundamental of the scale, the notes on that scale and each of their overtone series. Computing the degree of harmonicity between all these notes and their secondary and tertiary harmonics/partials will show exactly how they do and do not harmonize. [see Law of Harmony]

Figure 8.14 - Some Basic Waveforms and their constituent aliquot parts 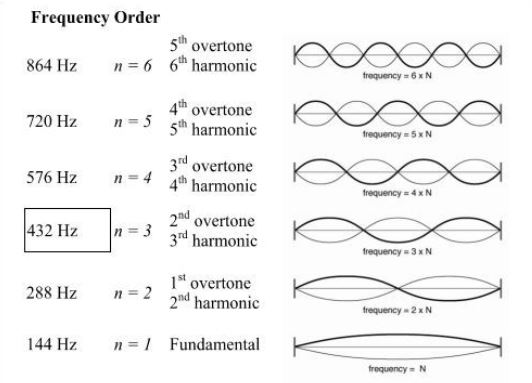 Frequency of A (Dale Pond; 2004, 07/06)
In the Schiller Institute article they make much of not using A=440 Hz because of its detrimental effects on the human voice. There are other issues too, I'm sure. I believe it was Pythagoras (who probably got it from Egypt) who first proposed or demonstrated A=432, in a "natural scale" scenario as pertains to vibrating strings. I concur with this finding or proposition insofar as it goes.

But, as always, there is far more to this issue than at first (even after 17 years of research!) meets the eye, ear and mind. Suffice it to say, for now, A=432 is more "natural" than other frequencies. Of course, most musicians will use whatever tonal frequencies best serve their specific purposes. And this is as it should be (IMHO) because having freedom to create something new and unique is important to us.

There are countless vibrations, oscillations and cycles moving among themselves constituting the rhythmic motions of the natural universe. Some researchers during the remote past have been sensitive to certain of these cycles and periodic motions sufficient to discern them and make other uses of them. So we see witnessed in ancient structures all sorts of numbers, number theories and relationships. Perhaps some numbers are more important than some other numbers IN CERTAIN CONTEXTS. But numbers like everything else are neutral possessing the meanings we have chosen to associate with them as also their relative standings amongst themselves within certain other relationships with each other.

I see the tension between A=432 or A-440 pretty much as written - but in a slightly different contextual expression. That A=432 leads to Concordant arrangement. If A=432 is concordant with nature then it participates in Concordant Chord Settings (what we would call today a Concordant Signature). A=440 is then a participant in discordant chord settings, by whatever degree of discord. So yes, as you say, A-440 is of the Terrestrial (material) realm whereas A=432 is of the Celestial (Divine) realm.

If we are to aspire to peace and harmony in life, as Keely said in his article "The Chord-Settings of Life" we must look within and cohere to concordance with the Celestial influences as evidenced by virtue of these concordant chord settings which are of the divine. In a sense then we "tune" our personalities to these centers.

"For the experience becomes rather as a very delicate instrument of music upon which the chords of life (which is God) are played." [Cayce (1436-2)]

It would behoove us then to compose and listen to music built upon this base of A=432 and shun music composed with anything else.

Not 432 Hertz per se but the overall behavior of vibration/oscillation in its natural state - uninterferred with. In this natural and dynamical state A=432 occurs but not A=440 unless as a participant in obtuse or unnatural tuning arrangements. It's (A=432 et al) correlation is with consciousness in its quiescent state; i.e., meditative Whole Mind state. Whereas A=440 is more in line with consciousness in its 'excited' state of thinking, worrying, fear, guilt, etc. Hence the use of this tuning in our times as it facilitates these states and subsequently the "necessary" social commands and controls to "check" such (mis)behaviors.

It is therefore theorized that if the tuning to A=432 were more prevalent (truly ubiquitous) society would settle down as individuals settled down into a closer approximation of who and what they are: Love (Peace, etc.) [See Chord of Life Windchime]

The dynaspheres (and windchimes) are exemplifications of this theory, applied. People (not all!) feel a sense of deep Love, Peace and Joy when close to these devices. So in a way, as much as we've been enabled to date, we are demonstrating this theory in practice.

You also elude to a few of the problems in tuning the various types of instruments whether string, horn or keyboard. Mark was asking about accented notes. It was in addressing these and other difficulties and conundrums that led me to relentlessly dig after whatever underlying principles of tuning, harmonic generation/suppression, etc., etc. that could be discerned. What struck me in the face after working hard on music theory and vibration physics for seventeen years and misbelieving I was a dunce or something because I wasn't making sense of it all was that I was working with a hodge-podge of more or less bogus material. It wasn't me!!! It was the material. The music theories we have extant today are inherited kludges and mish-mash assemblies patched and stitched together over centuries. In short music theory is a "friggin' mess".

Some years ago I developed a program to compute limited harmonic series and summation tones. During my combating the Devil of Confusion over certain musical principles I managed to well scramble that original code as I attempted this or that matrix/algorithm. Some day when I'm not so caught up in more essential things like finding groceries and gas money I'll debug that code and expand upon it to include substractive (sub) harmonics. I will most likely do this new programming in Mathematica should I ever be able to afford a copy and master its esoteric programming. Until then I yield the floor on this topic to whoever wants it. It is likely this may become a group project before its done and completed...

440
"In 1910 Deagan persuaded the American Federation of Musicians, at its annual convention, to adopt A-440 as the standard universal pitch for orchestras and bands, thus settling a question which had long agitated musical circles. It was also accepted by the United States government and generally throughout the world." http://www.deaganresource.com/