noun: a single unit of written or spoken language
noun: a unit of language that native speakers can identify ("Words are the blocks from which sentences are made")
noun: a promise ("He gave his word")
noun: the divine word of God; the second person in the Trinity (incarnate in Jesus)
noun: the sacred writings of the Christian religions ("He went to carry the Word to the heathen")
verb: to use words to express something in a particular way

Keely
"In the beginning was the Word (Logos in Greek; the divine principle of Truth, of thought, intelligence, knowledge) and the Word was God. In Him was life, and the life was the light of men. And the light shineth in darkness and the darkness comprehendeth it not." [Bloomfield-Moore in Veil Withdrawn]

"This operation of the outflown word becoming a passive substance is the Mysterium Magnum - the greatest hidden secret;" contending that the original of all things lies in that our ideas produce acts; that the Infinite One or the "Word of God" produced creatures. "The Magia is above nature and maketh nature according to its will." [The Action of Force is Spiro-Vortex]

Hughes
With our present powers the darkness of ignorance is ever groping after the light of knowledge. If the field is so vast when we merely attempt to harmonise the laws which regulate the visible creation, it widens indefinitely when we attempt to harmonise, by the same laws, Creation with the Scriptures. "God is light," and with His Holy Spirit for our teacher, every line of His word instructs us; "like the ocean, the word remains essentially the same, while the light never plays upon its surface without deepening and varying its hues." [Harmonies of Tones and Colours, Reflections on the Scheme1, page 43]

"The grass withereth, the flower fadeth: but the word of our God shall stand for ever."—Isa. xl. 8. [Harmonies of Tones and Colours, Scripture Compared with Scripture, page 47]

"For I am the Lord: I will speak, and the word that I shall speak shall come to pass."—Ezek. xii. 25.[Harmonies of Tones and Colours, Scripture Compared with Scripture, page 47]

"Whoso despiseth the word shall be destroyed."—Prov. xiii. 13. [Harmonies of Tones and Colours, Scripture Compared with Scripture, page 47]

Nikola Tesla
Everyone should consider his/her body as a priceless gift from one whom he loves above all, a marvelous work of art, of indescribable beauty, and mystery beyond human conception, and so delicate that a word, a breath, a look, nay, a thought may injure it. [Nikola Tesla]

Cayce
"Then MIND, as He, was the WORD - and dwelt among men; and we beheld HIM as the face of the Father." [Cayce (1567-2)] see Mind of God, Creation, Christ Consciousness

"For, of the dust of the earth was the body-physical created. But the Word, the MIND, is the controlling factor of its shape, its activity, from the source, the spiritual entity." [Cayce (263-13)]

"Few can conceive of the body through which the Prince of Peace manifested - the Son, the first and the last Adam - as having been a channel for material desire, when considered as a body so purified as to bear that perfect One." [Cayce (281-51)] 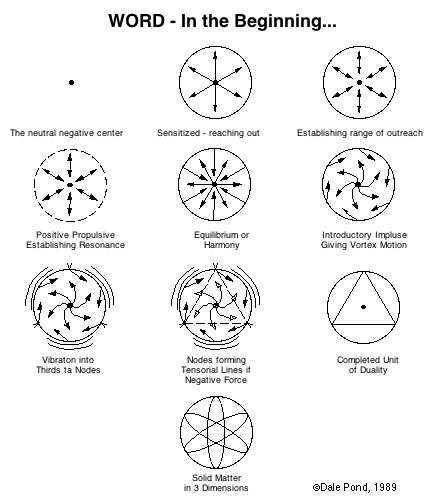 "In the beginning was the WORD"
(click to enlarge)

Quimby
“Here I differ from the world. I put the cause in words that convey fear to the senses or in some sensation, never in the phenomenon. The world puts disease in the phenomenon and guesses at the cause. They have never been taught that words are the basis of man's trouble. Words affect every person, yet you will hear people say, ‘it makes no difference to me what a person says, it does not affect me.’ But this is not the case. It is just as impossible for words to fall harmless on man's senses and not injure him as it is for stones to fall on his body without hurting him. Yet the world, ignorant of this fact, are constantly stoning the sick with their opinions and advice. Every word affects us as much as the one we speak to, even our thoughts affect us, and we are responsible for them as well as our acts. If this truth were known, man would conduct himself so that his thoughts would take a right direction. Then he will cease to do evil and learn to do good.” [Phineas Parkhurst Quimby, Do We See That Which We Are Afraid Of?, page 226]

Christ Returns - Speaks His Truth
"I saw that these plans and designs were, in reality, 'consciousness forms' and could be termed WORDS, since each WORD signifies a very special 'consciousness' form.
Hence the original WORD in 'Creative Power Consciousness' becomes manifested in the visible world. The WORD, and therefore the 'Consciousness Pattern' remains within the DIVINE CREATIVE MIND continually bringing forth its own." [Christ Returns - Speaks His Truth, Letter 1, page 12]

"With this vision I learnt a most valuable aspect of existence. Man himself is born with all the potential to make a beautiful life for himself but he, himself, by indulging his selfish desires and hatreds, creates a prison of misery for himself from which there was no escape until such times as he realizes the TRUTH OF EXISTENCE.
All the problems of harsh existence lay within the thought processes of man himself!
Only people's 'consciousness forms', their thoughts, words, feelings, actions created a dense barrier between their consciousness and the Universal Creative Consciousness interpenetrating the universe in every leaf, tree, insect, bird, animal and human being." [Christ Returns - Speaks His Truth, Letter 1, page 17]

"I was about to speak the 'word' which would change stones into bread but something in me halted me abruptly." [Christ Returns - Speaks His Truth, Letter 1, page 20]