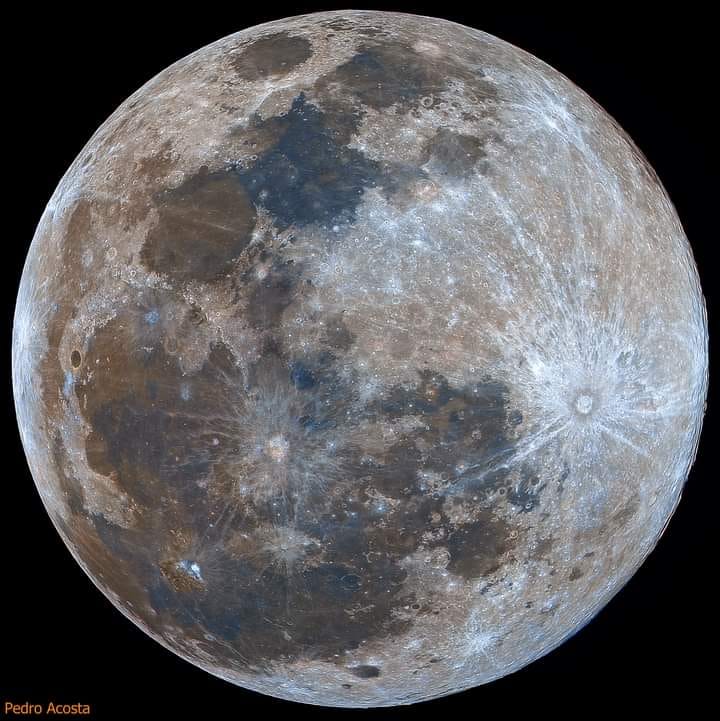 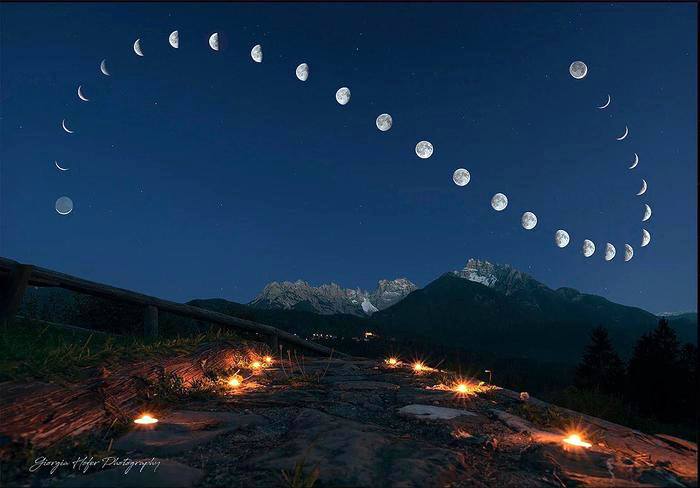 The Moon is Earth's only natural satellite and the fifth largest satellite in the Solar System. It is the largest natural satellite of a planet in the Solar System relative to the size of its primary (though Charon, which orbits the dwarf planet Pluto, is proportionally larger), a quarter the diameter of Earth and 1â„81 its mass. The Moon is the second densest satellite after Io. It is in synchronous rotation with Earth, always showing the same face; the near side is marked with dark volcanic maria among the bright ancient crustal highlands and prominent impact craters. It is the brightest object in the sky after the Sun, although its surface is actually very dark, with a similar reflectance to coal. Its prominence in the sky and its regular cycle of phases have since ancient times made the Moon an important cultural influence on language, calendars, art and mythology. The Moon's gravitational influence produces the ocean tides and the minute lengthening of the day. The Moon's current orbital distance, about thirty times the diameter of the Earth, causes it to appear almost the same size in the sky as the Sun, allowing it to cover the Sun nearly precisely in total solar eclipses. Wikipedia Moon

Blue Moon
This month's full moon, which rises on Tuesday (Aug. 20, 2013), is not just a Blue Moon - it's also the Full Sturgeon Moon, the Full Red Moon, the Green Corn Moon and the Grain Moon.

Today's full moon qualifies as a Blue Moon because it's the third full moon in a season with four (most seasons have only three). Historically, there have been two different definitions of a Blue Moon.

Technically, a Blue Moon is the third full moon in a four-full-moon season. However, a 1946 article in "Sky & Telescope" magazine mistakenly defined it as the second full moon in a single month (since most months have only one full moon), and the definition stuck. Because August will have just this one full moon, it wouldn't meet the mistaken, though commonly used, definition, though it does qualify as a technical Blue Moon. 10 Surprising Moon Facts

The moon's extra names come from traditional monikers for the full moon of a given month. A few hundred years ago, Native American tribes in what's now the northeastern United States kept track of seasons by ascribing particular names to each full moon. Later, European settlers added their own names for the full moons to the lexicon.

The annual August full moon has come to be known as the Full Sturgeon Moon, because the large fish called sturgeon can most easily be caught at this time of year. The name came from tribes who caught this fish in bodies of water such as the Great Lakes and Lake Champlain.

Another name for this month's full moon is the Full Red Moon, because the weather and atmospheric conditions during this season can often make the moon look reddish when it rises through a haze.

And finally, because crops grow tall at this time of year, this month's moon is sometimes called the Green Corn Moon or the Grain Moon.

Full moons occur every 29.5 days on average, when the moon is directly opposite the sun from the perspective of Earth. This causes its whole disk to be fully illuminated as a large, bright circle. Usually, when the moon is full, it passes either above or below Earth's shadow, but sometimes, when it is perfectly aligned, it travels right through the shadow, causing a lunar eclipse, when its disk is dark.

Blue Moons don't happen too often, which is why the phrase "once in a Blue Moon," has sprung up to mean only very rarely. After Tuesday's event, the next Blue Moon isn't set to occur until 2015. [source unknown]

Ramsay
The mathematical scales, if followed out regardless of other laws which rule in music, would read like a chapter in Astronomy. They would lead us on like the cycles of the moon, for example. In 19 years we have 235 moons; but the moon by that time is an hour and a-half fast. In 16 such cycles, or about 300 years, the moon is about a day fast; this, of course, is speaking roughly. This is the way seemingly through all the astronomical realm of creation. And had we only the mathematical ratios used in generating the notes of the scale as the sole law of music, we should be led off in the same way. And were we to follow up into the inaudible region of vibrations, we should possibly find ourselves where light, and heat, and chemical elective motions and electric currents are playing their unheard harmonies; or into the seemingly still region of solid substances, where an almost infinite tremor of vibrations is balancing the ultimate elements of the world. Music in this case would seem like some passing meteor coming in from among the silent oscillations of the planetary bodies of the solar system, and flashing past with its charming sound effects, and leaving us again to pass into the higher silence of those subtle vibrations to which we have referred, having no infolding upon itself, no systematic limit, no horizon. But music is not such a passing thing. Between the high silence of these intense vibrations, and the low silence of oscillating pendulums and revolving planets, God has constituted an audible sphere of vibrations, in which is placed a definite limit of systematic sounds; seven octaves are carried like a measuring line round twelve fifths; and motion and rest unite in placing a horizon for the musical world, and music comes [Scientific Basis and Build of Music, page 39]

The scales march on following each other methodically, whether they be written with sharps or flats, and

"Not a step is out of tune, as the tides obey the moon."

The most natural, because the genetic, way to write the scales is to make the major scales all in sharps, after C, because the major genesis is upward in ratios ascending; and to make the minor scales all in flats, after A, because the minor genesis is downward in ratios descending. Let the young student, however, always keep in mind that the sharps and flats are simply marks to show how Nature, at whatever pitch we are taking the scales, is securely keeping them in the same form as when they are first generated; and in their birthplace no sharps or flats are needed. [Scientific Basis and Build of Music, page 90]

Gravity Fractal - We did a calculation off the distance from the Earth to the moon. We started dividing it down by various factors and testing them on the bench. When I tried dividing it repeatedly by 12 I got a big surprise. I cut an aluminum tube to 2x of the value, filled it with a bismuth core, carefully filed the bismuth to fit perfectly. A strong field bubble started to form around it. After about 3 days I had to destroy it, it was starting to distort and warp the area in the garage so bad I was getting disoriented. It created an inflow compression field. Hit my head hard, so I had set it up on the shelf, but it grew! We used this length with stainless steel in a joe cell and in that it worked really well. The first Joe cell that did not ever go dead at night around 2 am. Cut a length of Aluminum tube and wave it around, as it points straight down it vibrates up pretty nicely. [David Lowrance, http://www.resonantfractals.org/Doc/Magnetism/GravityRods.htm]