Cycle of Motion (courtesy University of Science and Philosophy) (click to enlarge) "The following is a brief explanation of the complete cycle of motion which will explain what Dirac found, what he has not yet found and what he and Lodge and others say they do not understand regarding that which he has found.

The following is a brief explanation of the complete cycle of motion which will explain what Dirac found, what he has not yet found and what he and Lodge and others say they do not understand regarding that which he has found.

The electron is a doubly charged mass. The action of integrating any mass is a generative or condensive one which is called the attraction of gravitation. This causes mass to appear around a common centre of high compression pressure and gives rise to the commonly believed error that matter attracts matter, which is not true to nature. The reaction to this action of compression is the expansion of the field which has been rendered vacuous by thus being drawn upon by the gravitative, indrawing, endothermic action of condensation. The expansion of the residual volume, or field surrounding the mass, is a vacuity which is as equally minus the original equilibrium of the total volume as the centre of the mass is plus that equilibrium. 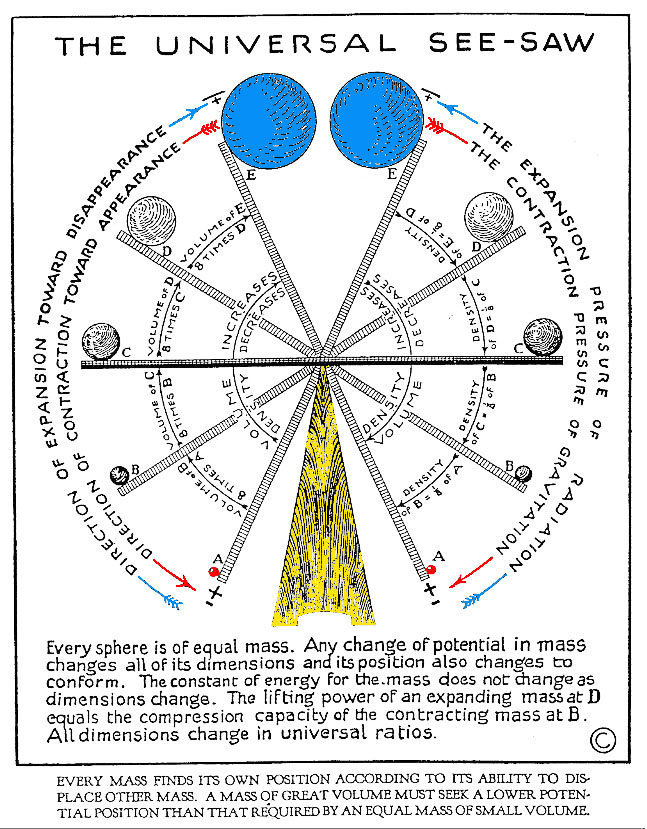 Universal Seesaw (courtesy University of Science and Philosophy) (click to enlarge) The force represented by that vacuity is an expansion pressure which is the equal and opposite of the gravitative compression pressure and gives rise to that commonly believed error of light repulsion which is not true to nature.

The "hole" that Dirac describes is the vacuous force of the expansion stroke of the universal pump. This force is correctly described as negative electricity, negative discharge, radiation, radio-activity or by any other name which results in the disappearance of mass into its surrounding tenuous field.

Cycle of Motion (courtesy University of Science and Philosophy) (click to enlarge) On the contrary, the high pressure point of dense mass is the condensive force which is the compression stroke of the universal pump. This force is correctly described as positive electricity, positive charge, gravitation, condensation or by any other name which results in the appearance of mass into solidity.

These two opposing actions and reactions constitute the electro-magnetic oscillations, or compression-expansion sequences, which are present in every mass and which constitute the mechanistic or life principle of the universe. These sequences have a periodicity of preponderances which are first preponderantly generative and then preponderantly degenerative, which we know of as the phenomena of growth.

We have now completed the cycle of appearance and disappearance of mass through the series of endothermic, inbreathing, positive oscillations of compression pressure and exothermic, outbreathing, negative oscillations of expansion pressure which is the dual characteristic of electricity; but we have one more characteristic of nature as a result of these action and reaction sequences.

This one other attribute of nature is the reproductive or regenerative force which is set up solely by the resistance of each expression of force against the other.

This characteristic attribute of nature to repeat herself, and to do so in waves or striations of periodicities, is because of the dual character of force to express itself always in equal opposition of force.

Hence there can be no such thing as a positively charged mass or a negatively charged mass. All charging masses are simultaneously discharging and all discharging masses are simultaneously recharging other masses in this two-way universe of motion. Energy is kept continually moving between the high pressure hot points of gravitative centres and the low-pressure cold areas of the evacuated fields which surround all masses.

Cycle of Motion (courtesy University of Science and Philosophy) (click to enlarge) This constant interchange is the cause of the motion of force which moves only for one purpose, and that is find an equilibrium position for which it is ever in search of and never finds, for that position is itself always in motion.

While in search of this ever-moving position the work of the universe, and of man, is performed. There is no other way that work can be performed than by the oscillations of this dually acting electric force as it surges back and forth between the two polar dead centres of force, the gravitative focus and the vacuous focus.

Every mass in the universe is a complete pump oscillating between two equilibrium dead centres of opposed force. Every two masses are reciprocating, collaborating and coordinating their respective energies, each in accordance with its respective and comparative potential. Each mass in the universe is revolving around every other mass in elliptical orbits determined by their mutual ever-moving compression and expansion foci.

All masses, whether electrons in hot suns or electrons in cold space, are simultaneously integrating by their generative oscillation, and disintegrative by their opposed radiative one. This is the completed cycle of the motion of force toward which Dirac has made a step in the right direction." [Russell to NYT - 1930 November 2]