Richard Feynman's Structure of the Proton and Neutron from his book, "QED"
ALL LIGHT PARTICLES ARE ALIKE

Light rays, for example, leaving the sun, are discharging the sun. They are also discharging themselves because they are expanding into greater volume. They are also lowering their own potential by multiplying their volume. They reverse their polarity when radially converging upon the earth. They are then charging the earth and themselves by contracting into smaller volume and are simultaneously multiplying their own potential by thus contracting. [Walter Russell, The Secret of Light, pages 166-167]

Neutron stars are among the densest-known objects in the universe, withstanding pressures so great that one teaspoon of a star’s material would equal about 15 times the weight of the moon. Yet as it turns out, protons — the fundamental particles that make up most of the visible matter in the universe — contain even higher pressures.

For the first time, MIT physicists have calculated a proton’s pressure distribution, and found that the particle contains a highly pressurized core that, at its most intense point, is generating greater pressures than are found inside a neutron star.

This core pushes out from the proton’s center, while the surrounding region pushes inward. (Imagine a baseball attempting to expand inside a soccer ball that is collapsing.) The competing pressures act to stabilize the proton’s overall structure.

The particle’s core withstands pressures higher than those inside a neutron star, according to a new study.

The proton (H+) is a light stable subatomic particle. It carries a positive charge [see entropy] which is considered the basic discharge of electricity. The proton may also be viewed as a unit of repulsive force or entropy. http://news.mit.edu/2019/physicists-calculate-proton-pressure-distribution-0222 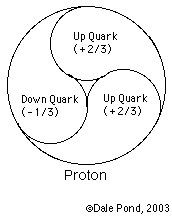 The sea of virtual quarks shimmering inside every proton inside every atom has now been studied with exquisite precision in a new experiment conducted at the Thomas Jefferson National Accelerator Facility in Newport News, Va. The surprising result is that the quark-antiquark pairs bubbling irrepressibly into and out of existence, especially those with a strange flavor, contribute so little to the life of the proton, prompting theorists to puzzle even more intently over the basic question: what is a proton? The simple answer has been that the proton consists of three regular (valence) quarks always present plus the effervescent "sea quarks" emerging from the vacuum plus a fleet of force-carrying gluons. But if ever the whole did not equal the sum of its parts, this is true for the proton. Sum the charge of the valence quarks and you get the charge of the proton.

So far, so good. But sum the mass of the valence quarks and you account for less than 1 percent of the proton's mass. The Hall A Proton Parity Experiment (HAPPEx) at Jefferson Lab scatters a 3-gigaelectronvolt beam of electrons from a slender thermos bottle of liquid hydrogen, providing in effect a target full of protons, and from a helium target, which provides both protons and neutrons. Only those events in which the electron scatters elastically (they lose none of their energy, but do deflect through an angle of 6 degrees) are chosen for analysis.

One can think of the electron as scattering from the proton by sending ahead a virtual photon (carrying the electromagnetic force) or a virtual Z boson (carrying the weak force) which probes the proton much as bright light sent and scattered through a microscope probes a bacterium. In this case the wavelength of the HAPPEx "microscope" is chosen with great care (by fixing the energy of the electrons and the position of the detector) to equal the size of the proton itself, namely one femtometer, or 10-15 meter; the microscope is viewing the whole proton all at once: it doesn't try to "image" the proton so much as it attempts to determine what the proton is at the moment of scattering.

By controlling the polarization (spin orientation) of the electrons, and by comparing the proton and helium scattering data, one can determine separately the contributions from electric, magnetic, and weak-force scattering. And from these, the degree to which sea quarks are present in the proton (encapsulated in a parameter called a form factor) can be deduced.

The proton is nominally made of two up quarks and one down quark, and so still more up and down quarks from the "sea" contribute little of interest. Therefore probing the sea is really a sort of referendum on the status of the strange quark, the next heavier quark, inside the proton.

Previous theories, supported by some rough experimental evidence, supported that the idea that strange quarks could account for as much as 10 percent of the proton's magnetic moment.

One of the HAPPEx scientists, Paul Souder of Syracuse University in Syracuse, N.Y., (souder@physics.syr.edu), reported at last week's April Meeting of the American Physical Society in Dallas that, with much greater precision, strange quarks can account for about 1 percent of the proton's charge and no more than 4 percent of its magnetic moment, and that owing to experimental uncertainties both of these measured values might be consistent with zero. In other words, the proton is a lot less strange than thought.

In addition to being the best exposÃ© of sea quarks, HAPPEx is notable for these reasons: it constitutes the most controlled use of a polarized electron beam; it provides the best measurement yet of the asymmetry between the scattering of electrons with their spins pointed along or against the line of movement, which in turn provides a measure of the relative strength of the electromagnetic and weak-force scattering, with a value of about 10-7, or one ten-millionth; and it arrives at a rudimentary measurement 20 attometers (one attometer is 10-18 meter) for the average separation between a sea quark and its antiquark twin inside the proton.