Secret of Thoth and the Missing Volume of the Wedjat Eye

The Secret of Thoth and the Missing volume of the Wedjat Eye in the Hebrew Letter Yvd. 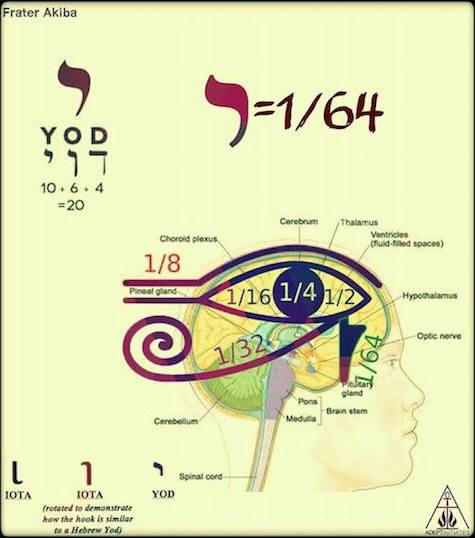 Center
Eye of Ra
Figure 11.09 - Eye of Horus - Egyptian Arithmetic
Neutral Center
Secret of Thoth and the Missing Volume of the Wedjat Eye
still eye of the cyclone

Y-V-D can be written as 1/64 or as 164 depending upon its unique and intended usage. When, for example, we use it as 164 we discover that it conceals a Lunar cycle, in that 41x4=164, where 41% is the percentage of the Lunar surface ever visible to the naked eye.

When we subsequently multiply 164x4=656 we determine the hours of the Moon in one sidereal Lunation period of 27.3 days, and the secret Qabalistic value of the "Messiah" in Greek Qabalah.

Qabalistically "Yvd" determines time not only by volume, that is by a contraction of electromagnetic space, but also secretly in the ratio of the developing series of the musical scale written as I/VD or 1/64th.

The true mystery of I-EVE (the Tetragrammaton or Jehovah) is electromagnetic and is to be understood in the manner in which the spectrum produces its octaves.

This is one of the great secrets.

Yvd engenders in itself the very reflection of itself by the first tone on the number line where its division into 1 and 64 parts is represented by these relative divisions of 1, 2, 4, 8, 16, 32, and 64. Thus inclusive within the Yvd are 1 and 64 parts which comprises its various octaves.

In addition to this we must consider that in musical theory the first tone is F since F creates the ascending C Major scale. Yvd, therefore, can be designated as the note F in the Chromatic scale of 12 notes and can be made to signify the initial taxonomic intervals of F-1 terminating an F-64 .

True Qabalah is governed by the division of the Perfect One, the unitary "Cube" volume which is divided into 2/3 and 1/3 by its geometrical fractions, or harmonies, that is by the Yvd and its unique division of the volume by the special numerical properties of 2 and 3.

The original Egyptian Hekat was intended display 64 Parts which was furthermore symbolized by the Egyptian Wedjet Eye as 1/2, 1/4, 1/8, 1/16, 1/32, and 1/64. Combining these divisions gave 63/64 leaving 1/64 missing. Therefore in order to complete the volume this missing 1/64 would need to be accounted for and we are told according to the Egyptian narrative, that "Thoth filled in missing volume" of 1/64.

The 2/3 represents the "Khar" which is derived from the Egyptian term 'Khat' which means "to measure". The Khar was the first measured form of a sphere obtained from the contraction of this sphere and its subsequent movements as a measure of Time.

Let us consider that the volume of the Moon enclosing the Earth, is equivalent to 27.3 days, or 656 hours, signifying a unity. In this respect when we divide this Unity into so many fractions we can express various physical properties of this volume. So taking 27.3 days to represent this unity in days and hours not only conveys a truth but also expresses the physical laws which the Spatial volume made up by the Moon revolving on its axis and around the Earth.

The genuine secret of Thoth pertains to the aforementioned numerations based upon a geometrical fraction of the lunar months by sidereal time, 13 months of 355 days, and synodic time, 12 months of 29.58 days, where every 29.58 days are exactly 8 lunation periods, New Moon to New Moon.

Lunar months roll on and on without any real stopping point, there are only calculations, therefore by saying 13 months we imply 12 months of the Chromatic scale, or 12 + 1 gives a Unity=13 since the 13th is actually the first. When we convert the sidereal months to synodic months we discover that in 29.58 day periods, divided into 8 phases, (8 is the number of Thoth), only 41% of the moon is ever visible to the naked eye.

For example in a Synodic month (29.58 days) the Moon waxes and wanes from Visible to Invisible following a specific reduction of this percentage by this geometrical series of Thoth. From 'New Moon to New Moon; we are essentially saying that from 1 to 64 parts, or 63/64, with a small increment left over.

This Missing volume is "coaguable light" which descends from the Moon in reduced form following this geometrical fractioning of 27.3 days, therefore we must consider this in direct connection with the electromagnetic coupling of the Earth core and the Moon as the Moon circles the Earth. Likewise we must consider how this rotational "volume" relates to this "reflected light" and the subsequent positive or negative charge that both the Earth and Moon take upon themselves in their respective actual rotations in connection with the Sun.

This is indeed the alchemical secret of the Sun and the Moon.

And in this lunar cycle we can discover the relationship of the Yvd, or 1/64 of this missing volume, in the 13th Lunar month, or the so-called Intercalary month of the Hebrews, called Ve-Adar or the second Adar.

The Egyptian Wedjet Eye conveyed this same Occult thought when it sought to express its meaning for measuring capacities of grains and so forth in their Secret Cycles of Time.