Ramsay
"On December 24th, 1845, Mr. Ramsay announced to the people of Rothesay that he intended to open classes for the teaching of the science of music, commencing with the musical scale mathematically demonstrated as being the result of a System of vibrations which constitutes the basis of music, and accounts for every musical phenomenon of sound. Thus, by treating music in its origin, and viewing it not only in detached parts, but treating it as a whole, he would remove a multitude of unmeaning terms in common use, such as "imperfect" and "superfluous intervals," "discords," etc., etc., which tend to mystify and impede the learner's progress." [Scientific Basis and Build of Music, page 8]

In getting the length of a string, in inches or otherwise, to produce the scale of music, any number may be fixed on for the unit; or for the vibrations of the root note any number may be fixed on for the unit; but in the fractions which show the proportions of the notes of the scale, there is no coming and going here; this belongs to the invariables; there is just one way of it. Whatever is not sense here is nonsense. It is here we are to look for the truth. The numbers which express the quantities and the numbers which express the motions are always related as being of the same kind. The fractions bring their characters with them, and we know by this where they come from. 1/4 of a string gives a note 2 octaves above the whole string, no matter what may be its length; 2 has exactly the same character as 1; 2/4 gives the note which is 1 octave above the whole string; but in the case of 3/4 here is a new ingredient, 3; 3/4 of a string gives a note which is a fifth below the [Scientific Basis and Build of Music, page 75] 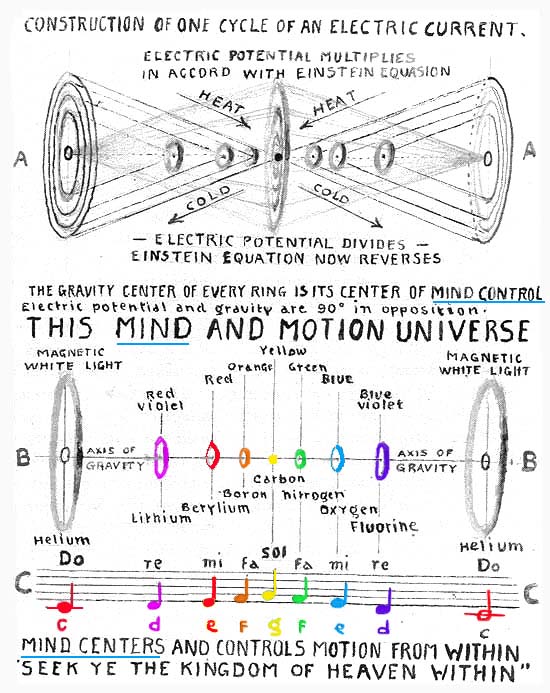 the presence of the keynote, no matter which one is being sounded, nor how many of them. [Atomic Suicide, page 162-164]

The seven tone Musical Scale is a formula of Cosmic Law which was worked out by the Ancient Esoteric Schools and applied to Music. The meaning of the notes is concealed in the names of the notes of the scale - Do, Re, Mi, Fa , Sol, La, Si, Do as follows : Do means Dominus; God as Creator; Re, means Regina Coeli, The Moon, Queen of Heaven; Mi means Microcosmic, The Earth; Fa means Fata- Planets, Fate , the spoken Word; Sol means The Sun; La means Lactea, The Milky Way; Si means Sider, the Star System. The Musical scale is like a Ladder - in fact the Latin word Scala means a Ladder. The Ancient Esoteric Schools understood it as the Order of all things and the Science of Harmonic Relationships of the Universe. Music rests on the Eternal Principles as expressed in Mathematical Laws. Taken downward the scale is a model for the descending levels of manifestation. In the C major scale the notes are given a certain meaning as follows: C represents the Absolute, B represents all Created Worlds; A represents our Galaxy the Milky Way; G represents our Solar System , the Sun; F represents the Planetary World; E represents The Earth; D represents the Moon; and C represents the Absolute. [source unknown]

(from Stone's Scientific Basis of Music)
(click to enlarge)