The Neutral Center Tones are the same as Russell's mid-tones generated between the 4 and 3 tones. This is the zone of hyper-sex-activity or hyper-polar-activity wherein regeneration is initiated (mutual voiding). This intense action generates overtones (mid-tones) of increasing discord. This process is explained in Keely's Law of Cycles:

"Coherent aggregates harmonically united constitute centers of vibration bearing relation to the fundamental pitch not multiples of the harmonic pitch, and the production of secondary unions between themselves generate pitches that are discords, either in their unisons, or overtones with the original pitch; from Harmony is generated discord, the inevitable cause of perpetual transformation." Keely, 1894

"The neutral center represents only focalization and distribution of the streams of energy." [ROTATION - Snell] 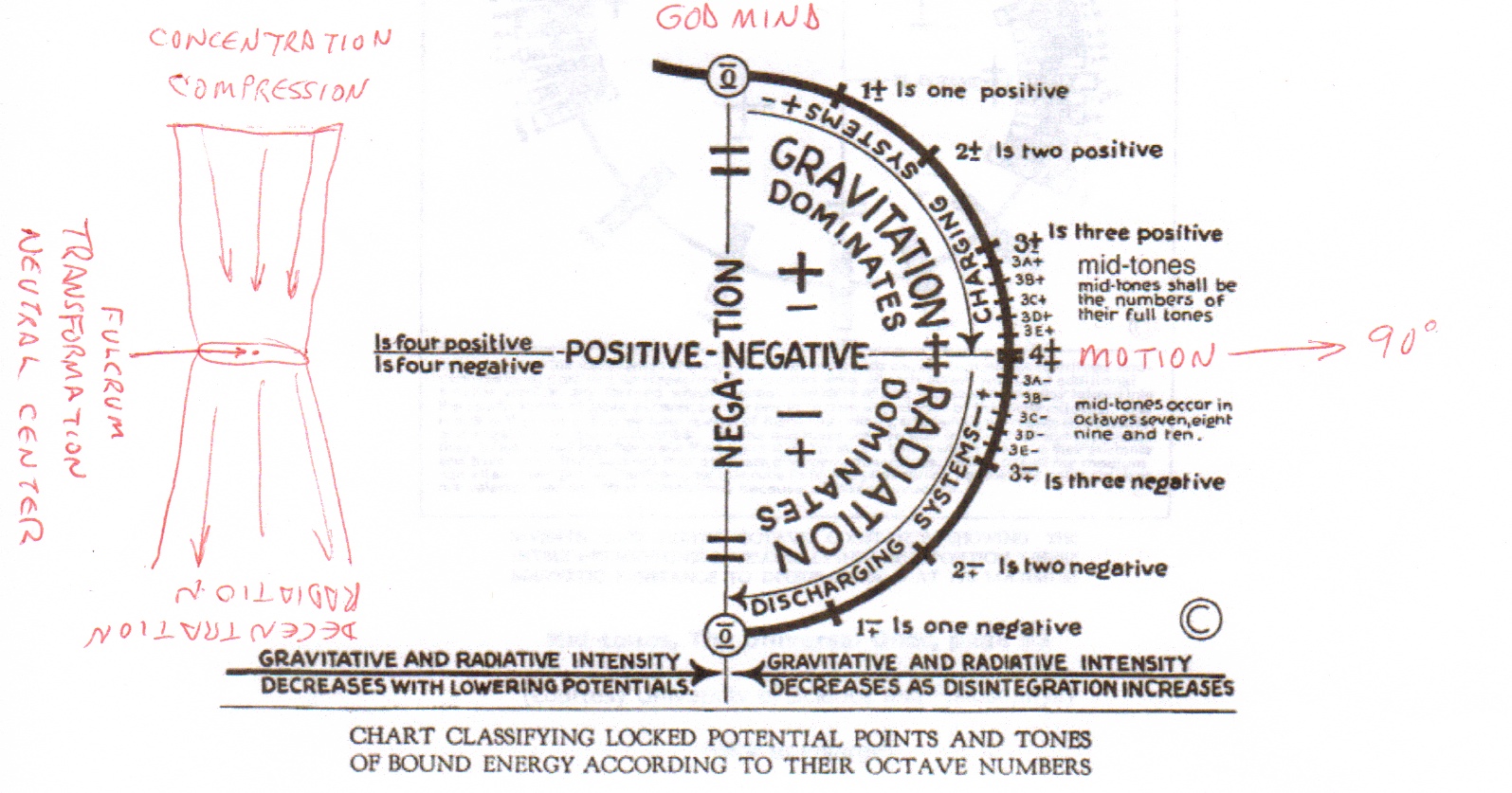 Mid-tones, The Universal One
(courtesy University of Science and Philosophy)
(click to enlarge)

"All motion of thinking Mind is born in the maximum high speed of the universal constant of energy. It runs the gamut of periodic and opposing deceleration and acceleration in six full tones, one double tone, and a master tone, to each of ten lowering octaves, and a variable number of mid-tones in each of the last four octaves." The Universal One, Book 1, Chapter 2

"All states of motion, no matter how complex, are reducible to ten octaves of seven tones each, plus their mid-tones and their master tones." The Universal One, Book 1, Chapter 14

"They are the seven tones of an octave, and there are ten octaves of seven tones each. In the last four octaves are many mid-tones, each one registering its own state of motion." The Universal One, Book 2, Chapter 5 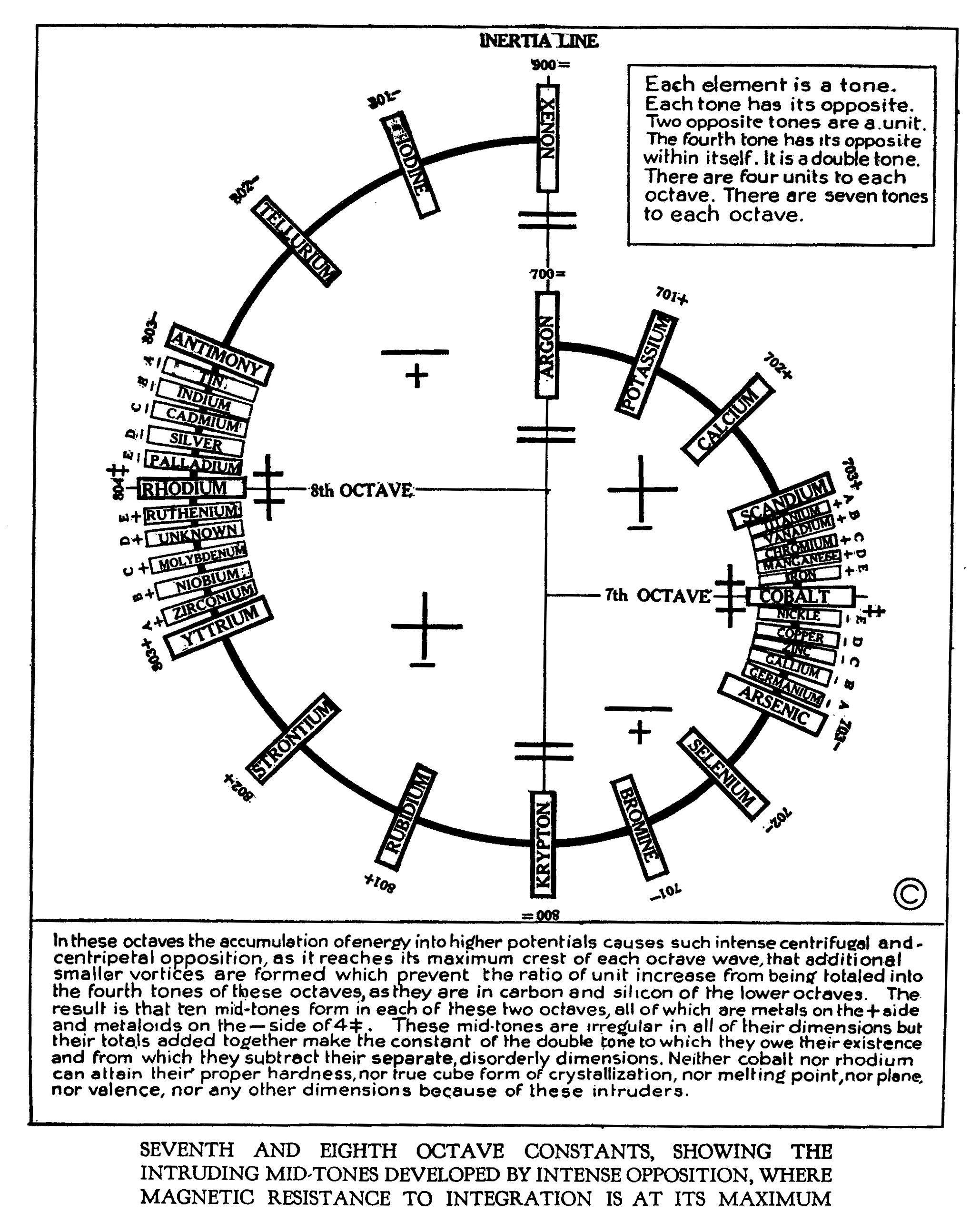 Mid-tones, The Universal One, page 93
(courtesy University of Science and Philosophy)
(click to enlarge)

"In these octaves the accumulation of energy into higher potentials causes such intense centrifugal and centripetal opposition, as it reaches its maximum crest of each octave wave, that additional smaller vortices are formed which prevent the ratio of unit increase from being totaled into the fourth tones of these octaves, as they are in carbon and silicon of the lower octaves. The result is that ten mid-tones form in each of these two octaves, all of which are metals on the + side and metaloids on the - side of 4++. These mid-tones are irregular in all of their dimensions but their totals added together make the constant of the double tone to which they owe their existence and from which they subtract their separate, disorderly dimensions. Neither cobalt nor rhodium can attain their proper hardness, nor true cube form of crystallization, nor melting point, nor plane, nor valence, nor any other dimensions because of these intruders." The Universal One, page 93. 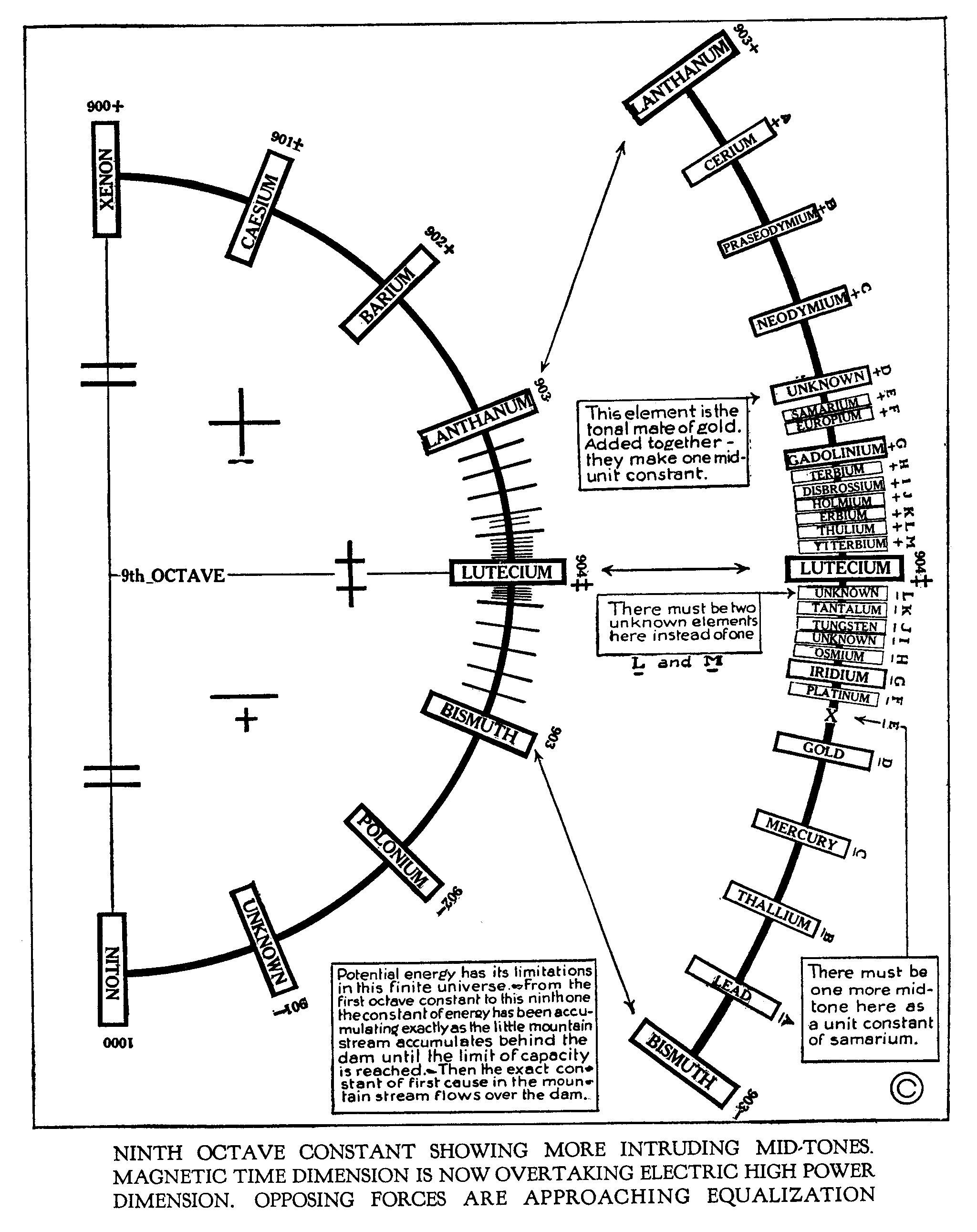 Mid-tones, The Universal One, page 95
(courtesy University of Science and Philosophy)
(click to enlarge)

"This element is the tonal mate to gold. Added together - they make one mid-unit constant."

"There must be two unknown elements here instead of one."

"There must be one more mid-tone here as a unit constant of samarium." 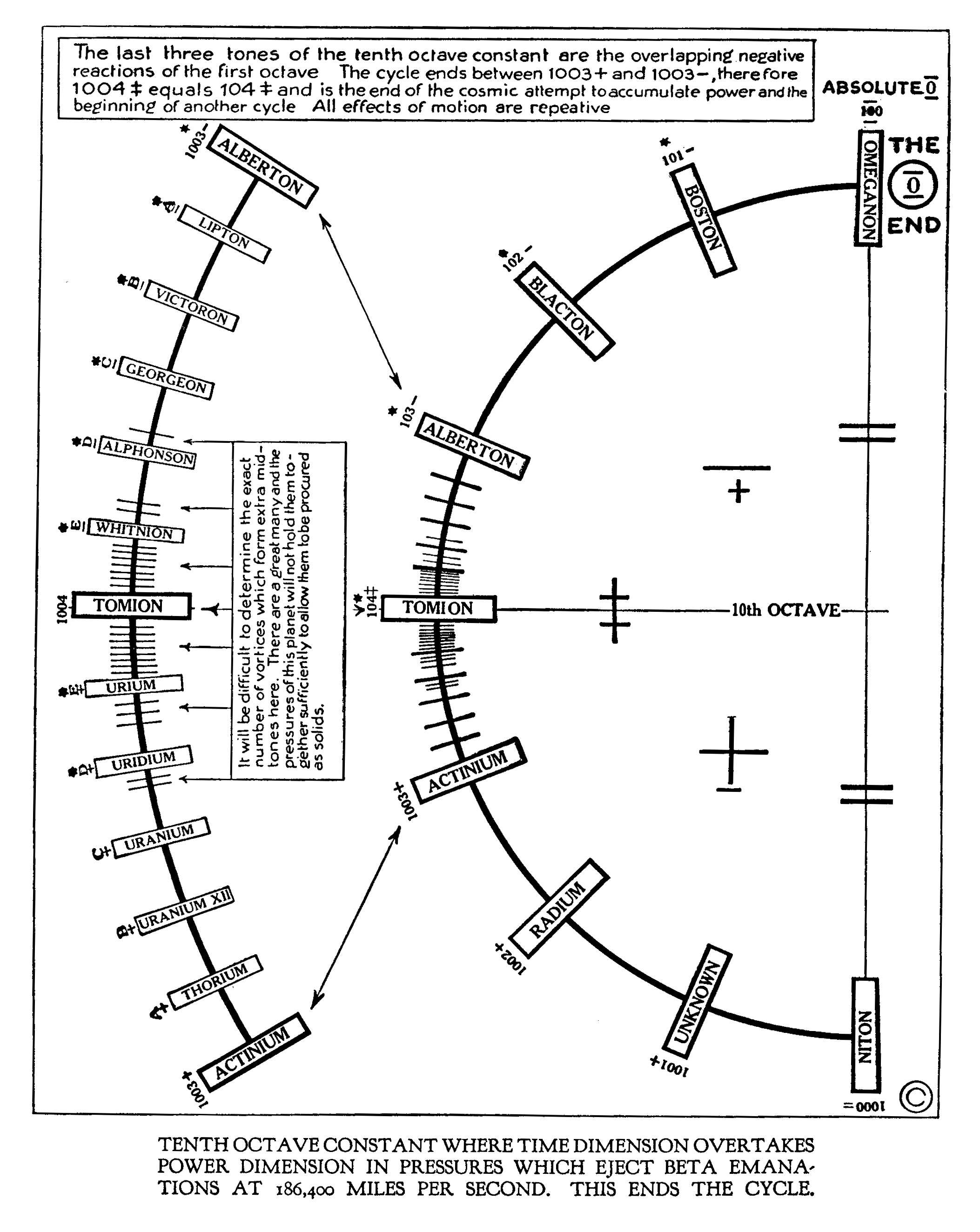 Mid-tones, The Universal One, page 97
(courtesy University of Science and Philosophy)
(click to enlarge)

"The last three tones of the tenth octave constant are the overlapping negative reactions of the first octave. The cycle ends between 1003+ and 1003-, therefore 1004+ equals 104+ and the end of the cosmic attempt to accumulate power and the beginning of another cycle. All effects of motion are repeative."

"Tenth octave constant where Time dimension overtakes Power dimension in pressures which eject beta emanations at 186,400 miles per second. This ends the cycle."

"We can exemplify, however, by having you open the damper pedal of your piano and strike any one note hard. If you do this you will also hear every other octave note, above and below it, sounding in their own frequencies. One of these notes will dominate over all of the others, however, and that is the mid-tone of all the octaves. That mid-tone is the crest of the universal wave. All effects of Nature reach a wave-crest. They must, or perish, as the 9th octave perishes through inability to create a wave-crest by the uniting of balanced pairs. Carbon is the mid-tone of all the elemental octaves." [Atomic Suicide, Chapter 11 - The Material Nucleus of the Atom, part 2 of 3]