Planets do not orbit around the Sun in a flat orbit plane. The Sun is traveling around its center and carrying the planets with it something like this: 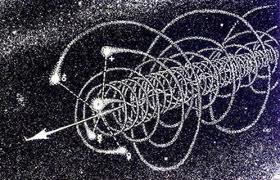 "On this subject Mr. Keely writes: - "Every disease that the physical organism is subject to has its connective link in the cerebral domain; where it unerringly telegraphs, as it were, its molecular differentiations, through the spinal dura mater or physical sympathetic transmitter, and vice versa back again. The sympathetic communication, as between the physical and mental forces, shows up truthfully the pure conditions that govern the celestial and terrestrial link of sympathy, as between the finite and the Infinite in planetary suspension. The whole system governing the suspension of the innumerable planetary masses, - the infinite certainly and harmony of their eccentric evolution and revolution, in their orbital and oscillating ranges of motion, - the triune sympathetic streams of Infinity that permeate their molecular masses - focalizing and defocalizing on their neutral centres of attraction - are all subservient to that Great Ruling Power: Mind Flow. There is not a grain of sand, nor an invisible corpuscle of floating matter, that does not come under the same rule that governs the most mighty of planets. . . ." [Vibratory Physics - The Connecting Link between Mind and Matter]