All good theories require a proof before they can be accepted. In our case of musical octave and nonoctave harmonics arising from all vibrations we can present a model.

In November 1989 Sound & Vibration magazine published an interesting article on Chladni wave plate modes and frequencies. The latest technology was used to record and tabulate this intriguing phenomenon. The aim was to find the various naturally occuring frequencies and modes of a vibrating square plate when forced to vibrate thus revealing its natural frequencies or modes of resonance.

In finding the interrelationships of the vibratory activities along the lines of our theory a table of these naturally occuring frequencies and modes was prepared, see Figure 1.12. Common music note intervals are compared along with the various modes and frequencies discovered. It is very interesting to see that the naturally occuring frequencies when compared one to another, as is done with musical pitches to derive intervals, all fall very close to known intervals! 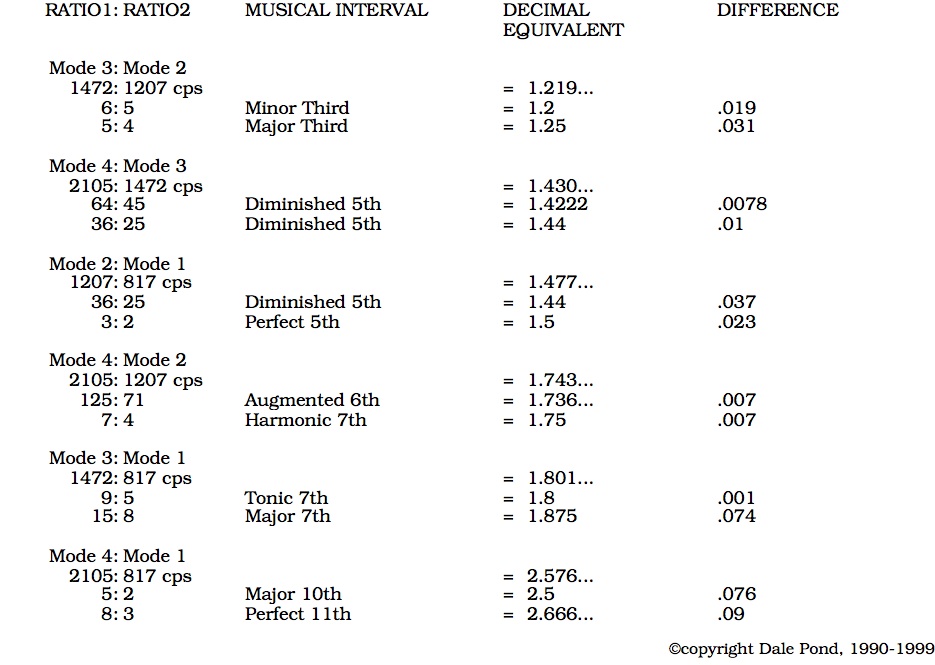 Taking just two modes by way of example, "Mode 3" and "Mode 2" (Figure 1.12) we see the difference between these two numbers is only 19/1000ths greater than a Minor Third. The difference between this naturally occuring interval and a Major Third is only 31/1000ths. The differences of some of the other numbers are even closer to an accurate musical interval. This becomes significant when a vibration of 1207 cycles per second in the Mode 2 pattern could generate a Mode 3 pattern at 1472 cps by simply increasing the 1207 cps by a musical third, a simple arithmetic procedure. There would be no complicated mathematical calculation required to calculate or predict this new frequency. The right-brain art of music would win out in its simplicity (Figure 1.14). In other words, the right brain simplicity would succeed easily over the left brain complications (chart #2). Even more significant is the grasp we would wield over a complicated subject (Figure 1.15). This simple insight gives us the Holy Grail of science: Predictability. The resultant frequencies can be accurately predicted before attempting the experiment. Thus instead of finding a series of unrelated frequency numbers we find a highly relative and organized phenomenon - pure harmony where chaos was thought to be.

Figure 1.14 - Fundamental C with some of its harmonics shown symbolically as musical notes on a staff demonstrating relativity of pitch.

Figure 1.15 - Vibration signature of the plateâ€™s complex wave form as ordinarily seen and used by engineering. Image is chaotic and difficult to decipher and use. Same information as contained in charts 2 and 3 presented in different format.

Musical intervals are the distances between pitches (relative frequencies). An interval is the amount of change (delta) between the pitches. The frequencies can be set up as algebraic variables set to a given difference in quantity just like symbolic notes on a staff. See Figure 1.14. It would then be easy to determine the resultant secondary frequencies and modes from this fundamental number by using the decimal values given above or simply marking another note symbol a musical third, fifth, etc. accurately representing a harmonic, naturally derived. In other words: when given a vibrating plate of these dimensions and characteristics it would be a simple matter to predict its vibrational behavior using these musical intervals and understandings. An in-depth, left-brain, time-consuming and expensive analysis would not be required.

Thus we can see our theory as stated earlier is accurate in its concept, execution and in the information it yields. Proving then, it really is a Musical Universe! which is both created and evolved from its vibratory root of One demonstrating there is no conflict between concepts of a created universe and theories supporting material evolution. Both these concepts work hand in hand to manifest, choreograph and present the spectacle of beauty, structure, dynamics, utility and love seen all around us. Genesis records God as having said Light into Being but perhaps it would be more accurate to say God sang Light into Being as the prelude to our Cosmic dance of Life?