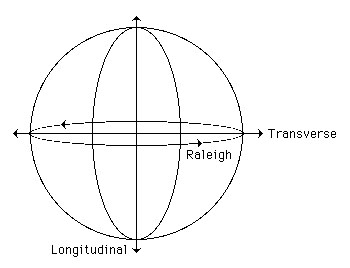 
Keely
"The order of vibration associated with the transmission of odor acts by sympathetic negative interference; and, consequently, moves in circles, with a velocity of 220,000 per second, at least." Keely and His Discoveries

Rayleigh waves are a type of surface acoustic wave that travels on solids. They are produced on the Earth by earthquakes, in which case they are also known as "ground roll", or by other sources of seismic energy such as ocean waves an explosion or even a sledgehammer impact. They can also be produced in materials by many mechanisms, including by piezo-electric transducers, and are frequently used in non-destructive testing for detecting defects. When guided in layers they are referred to as Lamb waves, Rayleigh or Lamb waves, or generalized Rayleigh waves.

Rayleigh waves travel across surfaces - and are thus a type of surface wave. In perfectly homogenous, isotropic and infinite materials, Rayleigh waves would not be apparent. In seismology, Rayleigh waves (called "ground roll") are the most important type of surface wave. Most obvious close to the surface of mediums, Rayleigh waves are made of longitudinal and transverse motion that decreases exponentially in amplitude as distance from the surface increases. There is a distinct phase difference between the component motion types. In isotropic solids the surface particles move in ellipses in planes normal to the surface and parallel to the direction of propagation - the major axis of the ellipse is vertical. At the surface and at shallow depths this motion is retrograde, that is the in-plane motion of the wave at the peak is in the opposite direction to the propagation of the wave. Deeper into the material the motion amplitude decays and the eccentricity changes. At greater depths the particle motion becomes prograde. The depth of significant displacement in the solid is approximately equal to the acoustic wavelength. Rayleigh waves are distinct from other types of acoustic waves such as Love waves or Lamb waves, both being types of guided wave in a layer, or longitudinal and shear waves, that travel in the bulk.

Rayleigh waves have a speed less than S-waves, by a factor dependent on the elastic constant (Ïƒ) of the material near the surface.

Since Rayleigh waves are confined near the surface, their in-plane amplitude when generated by a point source decays only as , where r is the radial distance. Surface waves therefore decay more slowly with distance than do bulk waves, which spread out in three dimensions from a point source. The speed of Rayleigh waves on bulk solids, of the order of 2.5 km/s, is slightly less than the shear velocity.

The existence of Rayleigh waves was predicted in 1885 by Lord Rayleigh, after whom they were named. wikipedia - Raleigh Waves

Circular or surface vibrations, the third mode of the triune vibration modes of Longitudinal, Transverse and Raleigh, Lamb or Love waves. Raleigh waves travel along the surface of a vibrating object.