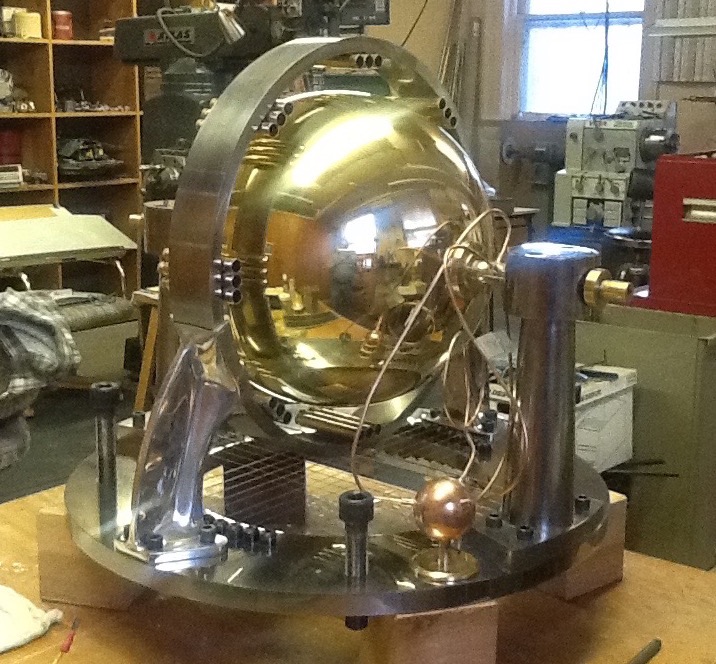 
The Musical Dynasphere going to Europe.

Comment - "I also mentioned to you the name Eloniss. I like the sound of it. I have been having lion symbolism arising consistently for a couple of years. The DS sphere and encircling band remind me of a lions head and mane. And Eloniss is an anagram of Lioness"

I notice it is close to Eloniss’ first birthday. Would you care to report on what has transpired during the passed year? Changes in Eloniss, you, your family, others? Any keynote experiences?
======
Hi Dale,

When the time came to pick up Eloniss, it had to be just then. I was being guided-told. The trip back to England was like riding on a magic carpet. Even in pieces in a suitcase Eloniss created a bow wave that flipped the all pervading demonic of the TSA_DHS on its head to Love. Arriving in London the sensation continued I just walked through customs with the miracle under my arms.

Dawn and I took E to my Cosmic Awakening group where observers saw during our meditation, the strings literally vibrate and a glow manifest around Her.

I keep her in the room where Dawn birthed her last March 27 (2016). She sits on the granite which sits on my late Mother's dining table. Above her still is the beautifully painted model of a Bald Eagle. Behind her  on the wall is the full size photo of John. Below her is a fossil of a nautilus shell that gifted itself to me on a local walk. On the granite are 4 shards of rock that Dawn collected, one being a chip from a stone from the Chartres Cathedral labyrinth. Finally on the granite are 2 vials of spring water from the Chalice and Red Wells of Glastonbury.

I haven't looked at FB in ages but 10 minutes ago I looked at a reposting of an SVP testimonial and didn't realise until I was half way through it that I wrote it. I must have been feeling very lucid at the time because it still stands for what I still believe to be true. That the resurrection of the Science of SVP, the material resurrection of its principles embodied by Dynasphere, is nothing short of  a miracle. YOUR miraculous life Dale. And finding Dawn. And the serendipity of finding SVPWiki in 2011, just after my amazing Keely dream, at the time Anna sent out the request to you to make another one for Europe, shaped my future. It would be built and I had to fund it.

So Eloniss HAD to be Here. King Arthur and his Spirit and what he exemplified in his life refined my focus even further. The Spirit of Man rises from the ground where he was Born. He and the Land are One. If He is dislocated a refugee, He loses Power. He becomes lost, disorientated. True Nation States exist for this reason. Sovereign Man. Of Free Will. Of Power.

And so to the Miracle of Brexit. Against all odds. The first emphatic sounding of a Nation's Will not to be subsumed into a Globalist super state. 19 million people in these Isles united (i believe telepathically) in opposition to the absolutely corrupt, sellout Establishment. The hysterical reaction of the Remainers was totally unexpected. It's as if they knew they were being left behind in some way, ( spiritually if you ask me), left with the sinking ship and wanted everybody else to drown with them.

The US Election result was brought about by Brexit, no doubt. Forgetting party lines, Republican-Democrat etc, the election of Hillary was the fast track to total human enslavement. Trump might tread the same path, accepted, but at least there is a possibility of a different future. Again we see the total rejection by a group of the will of the majority.

The World has been turned on its Head Dale. A new Dawn. We know not what tomorrow will bring because it all depends on the conscious exercise of Free Will. Keely and other Great Spirits sprang from the Earth under their feet. These conditions must be re-established.

So, to cut a long story short Dale. We have never seen a year like 2016 in our lives and Dawn HAD to birth Eloniss before it all kicked off. You can spend a lifetime trying to convince me of my irredeemable madness, but I will still see Eloniss as the prime Cause of what we have experienced. And it's nothing compared to what we are about to experience.

Let's see what a Dynasphere in CA brings!! But that's up to Jeremy and how high he sets his heights. For me there was, is and never will be a ceiling.

I saw the photo of Emoto and the dynasphere. Great man, in his way, but he didn't Understand what he was looking at. The Oriental mind is a different beast with different priorities. I will be very surprised if there is any funding from Japan.

Dale, Dawn, H. B. visited me and has given me the long term loan of a Rife Machine. It is a sophisticated frequency transmitter designed to bathe a subject in pre selected frequencies for the entity's well being. Can I program the 18 tones of the strings of Eloniss into the Rife and immerse her in this Field? I need your thoughts. I feel this would exponentially increase the power of Eloniss, which might or might not be a good thing . What I know is my intention has to be utterly impeccable.

By the way Dale, Henry is thinking of living in Hawaii. His Life purpose could be realised there. He is not short of a bob or two. Perhaps a Dynasphere in Hawaii makes alot of sense. Call her Pacific! From Pax.

A fairly politically charged e-mail. I hope I have not offended.

Back to stirring the Pot!!