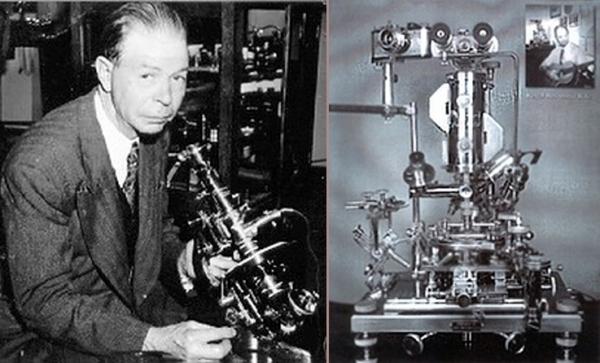 
Royal Raymond Rife (1888-1971) born between two (2) ages, contributed significantly to the furtherance and betterment of mankind by introducing a very interesting "novelty of fact" capable of discerning [ "seeing" ] microbes and viruses in their actual [ "living" ] condition, thereby enabling him to "analyze" and "discover" how to rid these "organisms" from animals and the human body. By observation, he discovered that these "organisms" had a "crystalline" structure and therefore it was possible to "shatter" them by resonating a specific "frequency" reference "adjusted" and "tuned" to each "organism"s" specific "frequency signature," thus leaving the human cell structure "intact". If you can recall the opera singer who sings a very high note, thereby shattering a "crystal" glass goblet.

Dr. Rife"s contribution was [incredibly] significant and indeed [ very ] "novel" because prior to his discovery, there was [ absolutely ] NO capability to "cure" specific [recognizable] "diseases" because they could not be isolated and identified. Dr. Rife"s inventions enabled him to "identify," "isolate" and "study" the smallest microbe and apply "specific" frequencies "tuned" to each "individual" microbe destroying [shattering] them where they lived. All of this was initiated during the "horse and buggy" era and brought forward into the 20th Century by very careful laborious study and due diligence under very stringent laboratory conditions and protocols. 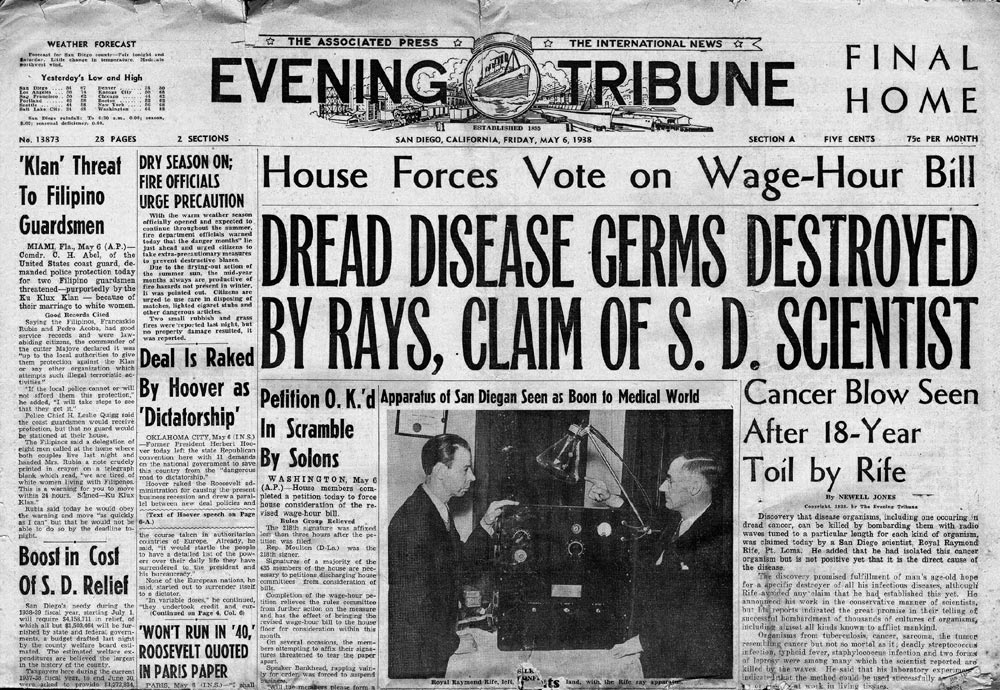 Royal Raymond Rife made the frontpage
click to enlarge


Let me explain the nature of the dynamics of Rife"s "novelty of fact" and why it was a significant accomplishment. First, Rife acquired significant backing and financing, in order to properly finance his "novelty of fact" concept [the creation of a specialized microscope capable of seeing virus"s and microbes in their [pristine] [normative] "living" state]. This was many decades before anyone knew about the possibility of an electron microscope, whose electron level instrumentation would have obliterated these parasites preventing Rife from viewing [studying] their crystalline structure [nature]. The Rife method was practical and preserved the structure of the viruses, so that they could be [studied] viewed as intact [living] organisms. This required him to dedicate many, many thousands of hours [a significant portion of his life] to first "conceptualize" and then "create" the "mechanism" to enable him to reach his goal of achievement, the Rife Microscope. His microscope was "complex" and required many hours of patient fine tuning to adjust it for light [reflection] and proper "magnification." These were "novel" and "complex" rigorous undertakings by a very dedicated and disciplined [persistent] professional, who starting [from scratch] with nothing but an "idea", a "novel" concept, determined to create something that never existed before, in order to cure rid mankind of disease.

Finally after having built the "mechanism," which required great skill, foresight and knowledge of [tool and die machining] mechanics and parts manufacture [remember this was an original one of a kind prototype built to rigorous specifications for specific [[intent] use], he now had the "ability" to "view" and "examine" the very viruses necessary for appropriate "study" and "experimentation" as "living" parasites. He was therefore now able to test and apply the appropriate "tuned" frequency of the specific "frequency signature" of each and every [type and category of] virus known. This was quite an accomplishment, a first, indeed a true "novelty of fact" created by a superb gentleman and dedicated scientist. Dr. Royal Raymond Rife was a pioneer, a man who originated "first thoughts", "first principles", and ultimately laid the "first foundations" in the discovery and ultimately the cure for all diseases. And his success rate was 9astoundingly significant receiving accolades from his peers and associates alike. He was a true genius, benefactor and a dedicated responsible doctor interested in curing mankind of communicable diseases. And he accomplished and achieved his ultimate goal [single-handedly] after decades of very difficult and laborious effort.

Then the "control paradigm" ultimately took over, destroying his "accomplishments", ridiculing his "discoveries."

Ultimately burying his name, concept, creation, and mechanism. Instead of a well-deserved reward for a lifetime of achievement, he was obliterated as a human being by a despicable "process." He ultimately drowned himself in alcohol in order to suppress the emotional pain of having his life"s work trashed. He died in relative obscurity, until now.

It is my hope and prayer that the young grad students, [new scientists, doctors, technicians] coming out of the Universities will ultimately "continue" where Dr. Royal Raymond Rife ultimately laid the "foundations", so that his memory, his sacrifice, and his great work and his NOBILITY will never be diminished but live on in the hearts and minds of succeeding doctors and science professionals.

All the Best,
Leslie R. Pastor