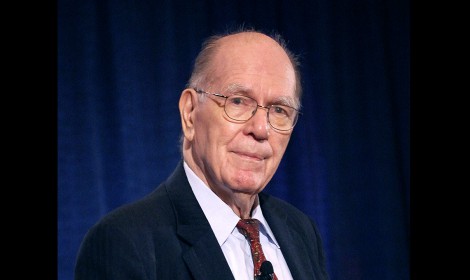 Lyndon Hermyle LaRouche, Jr. (born September 8, 1922) is an American self-styled economist, political activist, and the founder of several political organizations known collectively as the LaRouche movement. He has been a perennial candidate for President of the United States, having run in eight elections since 1976, once as a U.S. Labor Party candidate and seven times as a candidate for the Democratic Party nomination. He is the founder and contributing editor of the Executive Intelligence Review, and has written prolifically on economic, scientific, and political topics, as well as on history, philosophy, and psychoanalysis. (from Wikipedia)

For some years I've ocassionally read Lyndon LaRouche's works and those of people working with his references and materials. As surprising as it may seem these ones have been all over various aspects of science, physics, geometry and music as would appear to apply quite comfortably to our work with New Energy development and use. It would not be too far fetched to say LaRouche is the Benjamin Franklin of our age.

For instance in the following linked article LaRouche mentions what he calls the "anti-entropic" principle (syntropy) no less than three times. This principle was discovered and discussed by such notables as Carl Friederich Gauss, Kepler, Georg Friedrich Bernhard Riemann and Nicholas of Cusa long before this principle was practically used by Keely, Russell, Schauberger, William Baumgartner and perhaps Nikola Tesla and more recently mentioned by Bearden, myself and others. [See articles The Principle of Mind and On Monadology]

Syntropy is the missing half from conventional science in all its fields. This is the creative life God principle without which there would be no universe builded up. Instead of this Life Principle (integration) orthodox science prefers to deal exclusively with the death principle or entropy (disintegration).

An Economic Revival Needs Real Science excellent article; I couldn't have said it better myself.
Doubling the Cube
Duplication of the Cube
LaRouche biography
GAUSS AND THE PHYSICAL TENSOR
Mind is the Principle of the Universe
More on Calculus
My Science & Our Society February 25, 2014
On Monadology especially important
Orbits and Gravitation
Physical, Economic and Musical Science list of articles with links
Politics
Reimann for Dummies Bruce Director
Science and Christianity: This Easter Sunday
The Principle of Mind especially important article
The Showdown has Begun
What & Where is Your Mind?