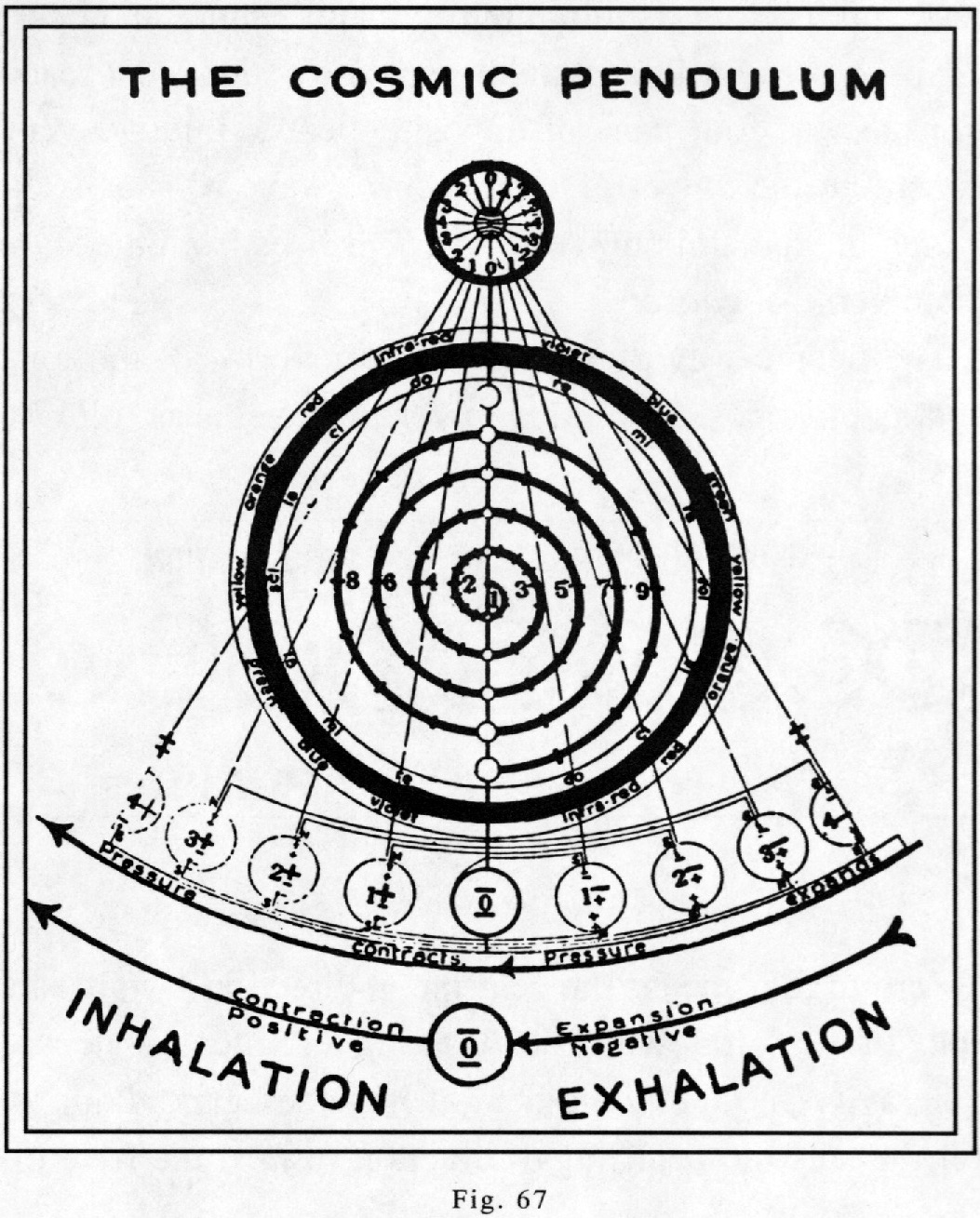 
The octave wave formula which governs all motion, and its birth position in the universal wave, is as follows in Fig. 68:


Zero to four means the centripetal direction toward the apex of the spiral, which leads to higher potential, density, gravity and the white heat of incandescence. Four to zero means the centrifugal direction toward the base of the spiral which leads to lower pressure, lower potential, vacuity, radiativity and the black cold of space. Each of these is half of a cycle.

The reason an octave cannot be counted from one to eight, instead of from one to four, is because each of the pressures - which bear the relations of one to four positive in the octave - is a credit pressure, which has its equal opposite debit pressure in one to four negative.

The elements of matter, born on the spiral pairs of opposites as tones, have the same relation as tones of music have to the octave wave.

All wave motion is expressed in eight tones - four pairs of opposites. The middle pair is seemingly one. The octave is usually expressed as seven for this reason. An octave is a series of orderly harmonic tones. Tones are multiplied and divided pressures of light, spaced rhythmically with mathematical precision upon each octave wave of motion. The law which applies to one effect of motion applies to all, whether sound wave, electric current, color spectrum or octaves of elements of matter.

No state of motion has permanence or even duration. Everything is forever in a state of transition, changing its position in its wave by either multiplying or dividing its vibration frequencies to change its conditioning.
The basis of all octaves is the keynote of rest from which the octave springs to express the idea which lies within the magnetic stillness of that keynote. The fulcrum of the wave of musical octaves is its keynote from which all tonal changes in the octave are mathematically calculated in wave frequencies and volume. That keynote is always in one's consciousness whether the note is being sounded or not. It is the balance of its octave. All tones are out of balance with it at all times and forever desire balance. No state of motion can evade the keynote of rest from which it sprang, nor can it be separated from it electrically in matter - or consciously in Mind.

No matter what instrument produces octave tones, its frequencies and other dimensions must be in the orderliness demanded by the opening and closing spiral pairs which control those tones by conditioning them. Like- wise, no matter what the instrument, whether larynx of man, string of violin, carbon wave field or color spectrum, its sole motivating power for producing change of dimension for the purpose of producing change of tone is electric pressure directed by desire and borrowed from the keynote of the octave's stillness. Furthermore, all power thus borrowed for one expression in any octave tone must be in balance with the opposite of that tone within which those borrowings have been debited. 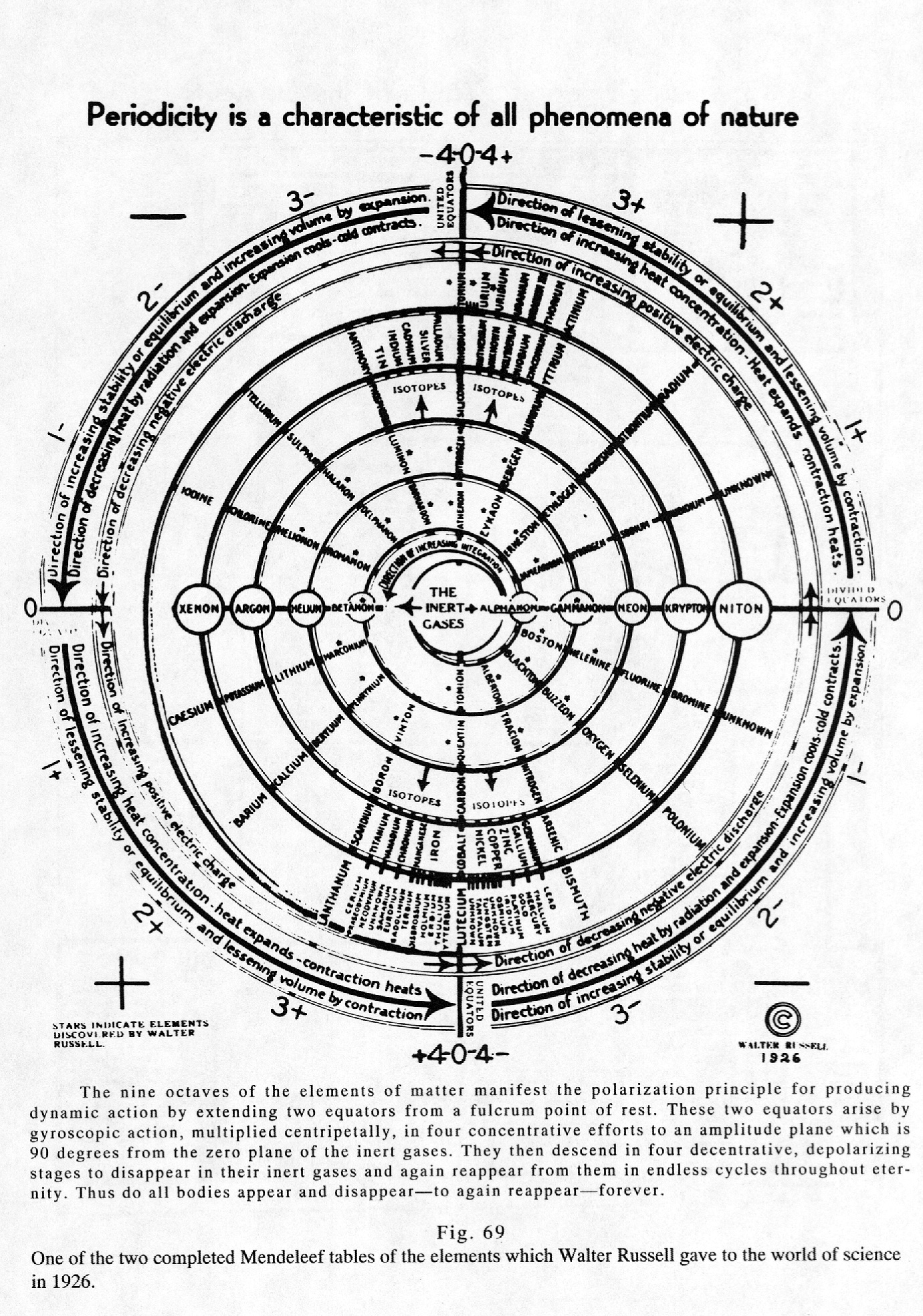 
This outstanding fact of natural law must be borne in mind in considering those principles as applied to the mechanics of the universal wave which produces the octave wave tones of the elements of matter with such precision that any effect produced by any of them in combination, or separately, will produce that same effect always. [Walter Russell, The Secret of Light, pages 258-263]