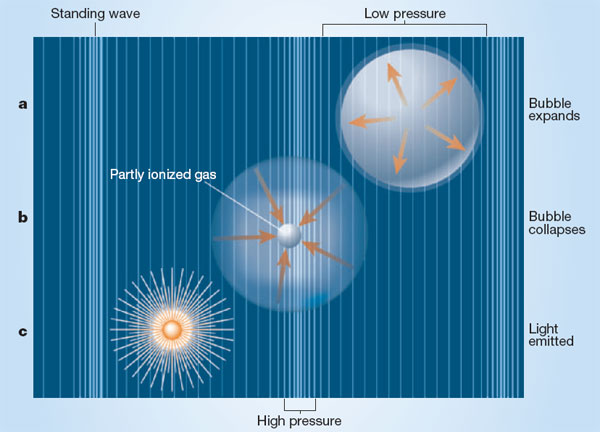 The Sound of Light A group of APL scientists has gone from studying sonar performance in the ocean to researching the industrial applications of ultrasound. The leap is not as broad as it may seem: The same basic physical principles may be applied to many different types of scientific problems, and research often evolves into new areas along unexpected paths.

For Department Chair Larry Crum, Senior Physicist Ron Roy, Senior Mathematician Pierre Mourad, and their colleagues in the Acoustics and Electromagnetics (A&E) Department, the common element in these seemingly disparate research areas is bubbles. Bubbles created by wind and waves scatter sonar signals that bounce off the ocean surface. Understanding the physics involved in this process is required to predict sonar performance. The group's interest in the acoustic effects of bubbles, including sea surface bubbles, grew out of earlier work on acoustic cavitation, a phenomenon wherein microscopic cavities form when water is subjected to ultrasonic waves. The cavities fill with gas that was originally dissolved in the water, giving rise to bubbles.

These ultrasound-generated bubbles are fascinating to study because, if conditions are right, the newly formed bubbles can be driven to pulsate violently. As the bubbles collapse, they produce an extremely brief flash of light, the product of what is believed to be an enormous concentration of heat energy within the bubble. The phenomenon is known as sonoluminescence. Just how much heat is present is the subject of vigorous scientific debate, a controversy that the APL team may help resolve. APL's work in sonoluminescence is already widely known and has been discussed in journals such as Science and Physical Review Letters, science magazines such as Scientific American, Physics Today, Science News, and New Scientist, and many newspapers, including The New York Times, The Dallas Morning News, and The Seattle Times.

Although scientists have known about sonoluminescence for more than 60 years, the complexity and randomness ofmultiple-bubble cavitation fields make the phenomenon difficult to study with precision. Recent improvements in experimental techniques have opened up new avenues for research. An important breakthrough occurred in 1989 when Felipe Gaitan, a graduate student of Crum's at the University of Mississippi, developed a technique for producing a single, stable bubble that could be acoustically suspended. Gaitan discovered that light emission correlated with bubble collapse and that a single bubble could be made to flash in synchrony with the sound-wave patterns. This work, and the predictable, repetitive nature of single-bubble sonoluminescence, paved the way for other groups to make a series of exciting discoveries about sonoluminescence. What they found was not only controversial, it was also astonishing. The brief flashes of light were linked to temperatures inside the bubble as high as 10,000 degrees Celsius, as hot of the surface of the sun. Some researchers think the temperatures inside the bubbles might be as much as eight to ten times higher than this.

One of the keys to understanding sonoluminescence is the spectrum of light that is emitted. However, water absorbs a portion of the spectrum, thereby obscuring important information. To capture the missing pieces of the puzzle, Roy, Mourad, and Crum have obtained funding from the Office of Naval Research (ONR) and the National Science Foundation (NSF). APL Post-Doctoral Scientist Tom Matula and Physicist Steve Kargl are also involved in the ONR project, which is proceeding on both experimental and theoretical fronts. On the experimental side, laboratory tests are being designed to illuminate the differences and similarities between single-bubble and multiple-bubble sonoluminescence. An effort to develop a state-of-the-art laser-scattering apparatus that can precisely track the motion of a near-microscopic bubble is also under way. On the theoretical side, the effort is aimed at modeling the gas dynamics of bubble collapse, focusing on the formation and evolution of shock waves within the imploding cavity.

The extremely short intervals of high temperatures that occur during bubble collapse can create some exotic chemistry that holds promise for industrial applications. Both Crum and Roy are working with private industry to develop ultrasound techniques that break down hazardous materials, produce exotic nanoparticles, and enhance ultrasonic cleaning techniques. Another application uses ultrasound as a catalyst. An example is the industrial chemical process of reducing potassium iodide to iodine. The high concentrations of energy generated in the bubbles can cut the reaction time from hours to a few minutes, or even milliseconds.

Sonochemistry has also been applied to manufacture small amounts of amorphous (noncrystallized) iron, a product of considerable commercial interest because it is useful in accelerating chemical reactions. Iron normally possesses a crystalline structure made up of well-ordered molecules. The intense energies available from bubble collapse are powerful enough to prevent molten iron from crystallizing before it solidifies. (source unknown)

(PHYS) When studying the action of ultrasonic waves on the development of photographic plates, Marinesco and Trillat, in 1933, accidentally discovered traces of new latent images in silver halide emulsions on the plates immersed in water. They explained the action as due to the ultrasonic waves accelerating the processes of reduction which are taking place in the sensitive plate by the violent mixing of the reactants, by Frenzel and Schultes, who made similar experiments, believed that the effect was actually due to exposure to light.

Sonoluminescence is always accompanied by cavitation, and can be easily seen by the naked eye in a dark room if glycerine is cavitated by the velocity transformer attached to a 20-W, 20-kHz magnetostrictive transformer. It appears as a bluish-white light.

Usually the sonoluminescence is so weak that photomultiplier tubes are used to detect it. This led to the discovery that the light appears as discrete flashes which are periodic with the sound field. Work then proceeded to find out at what phase of the sound field, or volume of the cavitating bubbles, the flashes occurred. The definitive experiment on this was performed by Meyer and Kuttruff in 1959. They produced cavitation bubbles on the end face of a nickel rod magnetostrictively excited at 2.5 kHz. At this frequency the bubbles were large and they used the sonoluminescence flash to produce a voltage pulse which activated a flashlight. The end surface of the nickel rod was thus illuminated, and by delaying the activating pulse by various amounts, a series of photographs showing the life cycle of the cavitation bubbles was obtained. These photographs showed clearly that cavitation bubbles started to appear halfway through the sound period, grew to maximum and collapsed rapidly. The sonoluminescence flash occurred at the end of the collapse. (Young, F. Ronald; Cavitation; McGraw-Hill Book Co., Maidenhead, Berkshire, England, 1989)

The Lawrence Livermore National Laboratory, University of Mississippi and University of California scientists are trying to determine how to use sonoluminescence - light created by passing sound waves through water - to trigger fusion.

A Cray supercomputer determined that for about 10 ps, the temperature at the center of the exploding, light-emitting water bubbles peaks at between 100,000 and 1 million degrees at 100 million or more times normal atmospheric pressure.

Scientists hope that by increasing the temperature and pressure just a little - by shaping the sound waves, for example - they can fuse deuterium. It will still be just a tiny reaction. Livermore physicist William Moss. (Photonics, Feb. 1995)