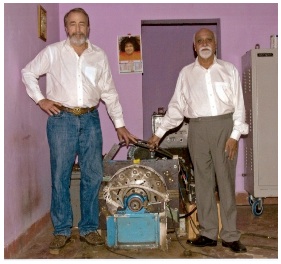 
Toby Grotz is an electrical engineer with a background in power systems design. He has designed electrical systems for coal, natural gas and nuclear power plants. Mr. Grotz has been effectively managing projects in the energy and utility industry and researching alternative energy systems for 40 years. Work experience includes design and support for capital improvements for power plants rated up to 1800MW.

His understanding of resource depletion and its relation to worldwide energy usage and electrical generation comes from his work at the beginning of his career exploring for fossil fuels in coastal waters on the East Coast of the USA and in the deserts and jungles of Mexico.

Mr. Grotz began his relationship with Mr. Tewari using a typewriter in 1983. He has visited Mr. Tewari’s lab eight times since 1993 and conducted measurements of Tewari’s electrical equipment with test equipment certified to be compliant with the National Bureau of Standards. In 1997 he put www.tewari.org online in order to present the theories and experiments conducted by Mr. Tewari to a worldwide audience.

Mr. Grotz received his BSE in electrical engineering form the University of Connecticut in 1973.