Pairs of interchanging opposed conditions are born from each other and become each other as a consequence of that interchange, as all opposites in Nature are likewise born. The cube and the sphere are the two opposites of form from which all forms of all things are born. They are the only forms ever created, being father-mother of all forms. (Figs. 13,14)


The sphere and the cube both manifest the cosmic principle of balance. Their position in light waves is in the one balanced position in the wave where compression and expansion have ceased to oppose each other, which is at wave amplitude (known as trough or crest). Carbon and sodium chloride are good examples of true cube crystallization. Likewise their atomic units are true spheres. Sodium-iodide or sodium-bromide do not crystallize in true cube because of their unbalanced positions near, but not upon, the plane of wave amplitude.

The cube and sphere are one, being two opposite phases of the same thing. The cube is the sphere extended to black coldness while the sphere is the cube contracted to white incandescence. Every true sphere in every light wave is an incandescent sun, regardless of its dimension. Prolating spheres, such as our sun, are becoming incandescent inward toward their centers, while oblating spheres, such as our planets, are becoming cold inward toward their centers.

Every creating body is set out into space from its crucible in the sun to cool into the form appropriate to its extension from the sun. That is one half of the cyclic journey of every body from the sun and back to it. The other half of the cycle is the return to the sun to void the body of its form for the purpose of acquiring a new body. Every cycle of motion is a journey from heat to cold and back again.

The sphere is the clay of earths, the light of suns and the formlessness of seed. It is the womb from which the clay of earth extends into the cube-bound heavens to expand into form, and it is the tomb within which all form is voided for regiving to the heavens as a new form.

Every form in Nature is either becoming a cube or a sphere, or is a section of either one. Complex bodies are multiples of spheres of matter surrounded by multiples of cubes of space in multiples of wave fields. All crystal shapes are sections of cubes. Their shapes are determined by their positions in their wave field. (Fig. 15) [Walter Russell, The Secret of Light, pages 222-224]

The cubes of space are wave fields which bound all interchanging motion between the two conditions within it. Motion cannot pass through these planes but can be reflected symmetrically back or extended symmetrically toward the center of the adjoining wave field.

Within each cube field is the curved universe of two-way light illusion; and beyond, to the farthest reaches of space, is a repetition of illusion from wave field to wave field at the rate of 186,400 miles per second. That is the speed in which every action-reaction anywhere repeats itself everywhere. This illusion of motion gives rise to the belief that light "travels."

Wave field boundary planes of zero curvature insulate all effects of motion, which take place within it, from every other wave field. Centering the wave field is the incandescent sphere which mates it. The potential of the entire field is divided equally between its centering sphere of multiplied matter and the surrounding space of divided matter.

Each mate of each wave field in the universe is balanced with its opposite mate, even to the weight of one electron. The reason why the centering sphere is of high potential and its surrounding space is of low potential is due to a difference of volume. The centering sphere may be a few thousand miles in diameter and its surrounding space many millions of miles in diameter; yet they are equal, potential for potential, but unequal volume for volume.

Neither of these mates could sustain its separateness of condition unless it constantly interchanged to give all of itself to the other alternately in repetitive cycles. Spheres must give to cubes of space by breathing out to discharge themselves and charge space. Space must then regive to spheres by breathing out from itself to discharge itself and recharge spheres.

Each short cycle of interchange is accumulated into a longer life-death cycle in which solids entirely disappear into space and space interchanges its potential to become solids. This principle constitutes the forever inside-out outside-in turnings of Nature by means of which all forms sequentially appear, disappear and reappear.

Multiplication and division of expressed energy into the high and low potential of gravitation and radiation is made possible by the plan of Nature which causes all actions of Nature to extend radially from omnipresent points of magnetic Light.

Gravitation pulls spirally inward from within to wind light waves into solids to center space. Radiation thrusts spirally outward to unwind dense solids into space to surround solids. Each is an equal reaction of the other. Each becomes the other sequentially.

Gravitation is the positive electric principle which exerts its pressures centripetally toward the maximum incandescent points of compression in every wave field. It is the father principle of Nature, the integrating principle of "uphill flow of energy" which forever balances its "downhill flow." 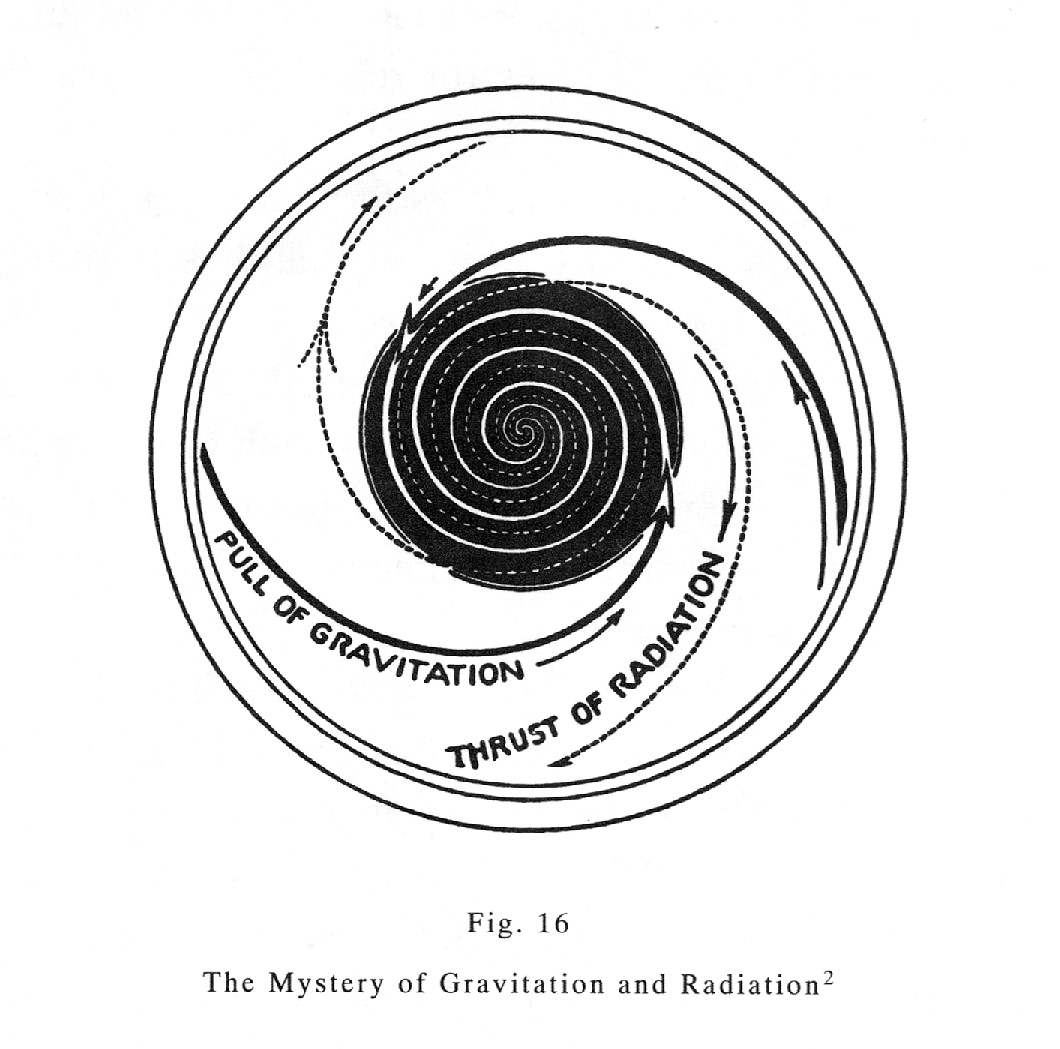 Radiation is the negative electric principle which exerts its pressures centrifugally toward its wave field boundary planes of magnetic Light. It is the mother principle of Nature, the disintegrating principle of "downhill flow of energy" which forever balances its "uphill flow."

The Creator extends power of motion to but one half of a cycle for each of the two opposite manifestations of His desire. Gravity gives a material form to bodies to manifest the idea of bodies. Radioactivity gives spiritual formlessness to the heavens for regiving to earths as formed bodies.

Gravity begins its half cycle as the inward explosive reaction of an outward explosive action, thus fulfilling the law that all opposite expressions are born from each other and interchange to become the other. It ends its half cycle at a point of rest at the still point of magnetic light which centers every material body whether of microcosmic or macromcosmic dimension. Gravity then ceases when its motion ceases.

Radiativity then begins its half cycle from that point of rest and ends it on wave field boundary planes of magnetic Light where gravity began. Radiativity then ceases when its motion ceases.

Both gravity and radiativity borrow their power to find balance in rest at their journey's end from the points of rest of their beginnings. They each repay their separate borrowings to the other at every point of their respective journeys. Each thus perpetually voids itself by giving to the other. At each journey's end, each opposite cancels itself out by giving its all to the other. It is then reborn as the other. Everywhere in Nature each action is its own reaction.

"Death gives to life that life may live; and life gives to death that death may die." -From THE DIVINE ILIAD

Every action in Nature demonstrates this principle. A ball thrown in the air must start from a point of rest, motivated by energy borrowed from the "center of gravity" of this earth which is its fulcrum. The point of rest in the thrower's hand is an extension of the earth's still center.

As the ball ascends, it decelerates as it pays its borrowed energy to space, thus charging space with the borrowings of earth and equally discharging earth. When the borrowing is fully paid the ball comes to rest. From that point it must again borrow the energy from space which it borrowed from earth to pay for its return to earth. Upon its accelerative journey to earth it passes each point at the same speed it registered on the upward half cycle, thus discharging space and equally charging earth to balance all borrowings and payings.

All actions in Nature are extension-retractions from zero to zero, and back again to zero. All are balanced simultaneously and sequentially. This is a zero universe of plus and minus zero which never exceeds the zero of the One Light from which it seemingly sprang as multiplicity. [Walter Russell, The Secret of Light, pages 222-230]