Sympathetic Vibratory Physics » CAUSE OF THE UNIVERSAL PULSE BEAT

CAUSE OF THE UNIVERSAL PULSE BEAT

CAUSE OF THE UNIVERSAL PULSE BEAT


Matter and space constitute the two conditions necessary for interchange of motion diagrammed in Figs. 18 and 19 with one distinguishing difference. That difference is that the two conditions represented by the tanks of the compressed and expanded air and the two cells of the electric battery are equal in volume, while bodies of matter and their surrounding space are unequal in volume.

This explains the seeming mystery of gravitation and radiation which causes solid objects to fall toward the earth and gases to rise toward space.

In the electric battery the interchange between the two pressure conditions can void both in an explosive flash by a short circuit if the wire connecting both cells is heavy enough. If a small wire connects both cells the interchange takes time to complete the voidance. Each condition gives to the other in installments, for the wire is not big enough to void both conditions instantly. The consequent giving and regiving by the two opposite pressures constitute the oscillations of the electric current. Electric interchange by installments is measured and recorded by waves, and the time element of those recordings of interchange are wave frequencies. They constitute the pulse beat of the electric current. When an electric wire pulses with wave frequencies of an electric current we say that it is a live wire. When it stops pulsing because the current is disconnected we say that the wire is dead, for it no longer pulses.

All Nature pulses in measured frequencies with the heartbeat of the universal electric current, as evidenced by universal breathing inward toward bodies and outward toward space. When breathing is switched off in man's body by the cessation of interchange between the two opposite pressure conditions of matter, we say that the man is dead. By solving the mystery of "installment interchange" between bodies and space one can more fully comprehend the fact that neither pulse beat, breathings nor wave frequencies of interchange have any relation whatsoever to life, for they relate only to the principle by means of which life or energy is manifested by motion.

The first step in solving this mystery lies in the principle by means of which matter and space become unequal in volume. 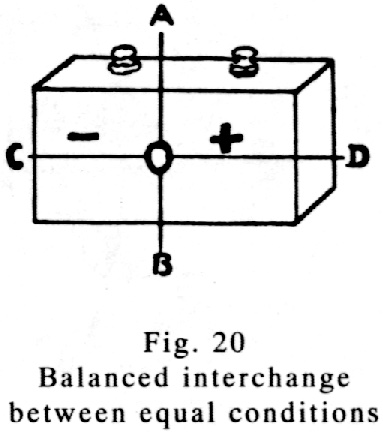 
Fig. 20 represents the electric battery with the line AB dividing the two pressure conditions as the equilibrium of both. This line represents a static equator - a plane of rest from which both opposite conditions are extended at right angles as a dynamic equator - line CD. 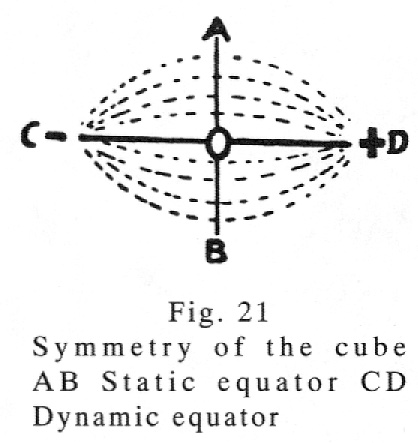 
Fig. 21 represents static and dynamic equators (or magnetic and electric) at ninety degrees from each other. As the two opposed conditions which extend from these planes of rest are equal, the lines of force which connect both are as symmetrical to both diameters as though reflected by mirrors placed at right angles to each other. Such symmetry belongs to the cube and sphere alone. 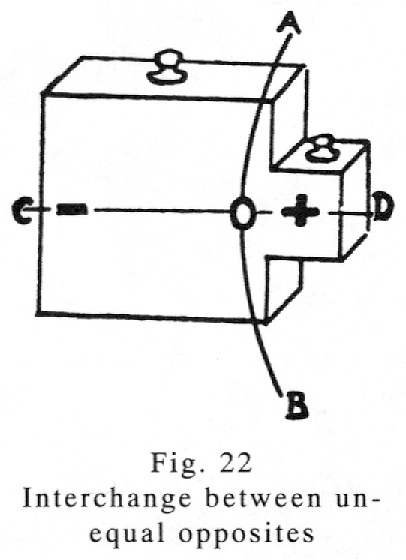 
Fig. 22 represents the electric battery with the negative cell much larger than the positive cell. The static and dynamic equators will still be at right angles to each other but the static equator will not be in the middle. It will be much nearer the positive pole and will be curved because lines of force which record the measure of interchange between the two opposite pressures can be symmetrical to the dynamic equator only, and not to the static equator. 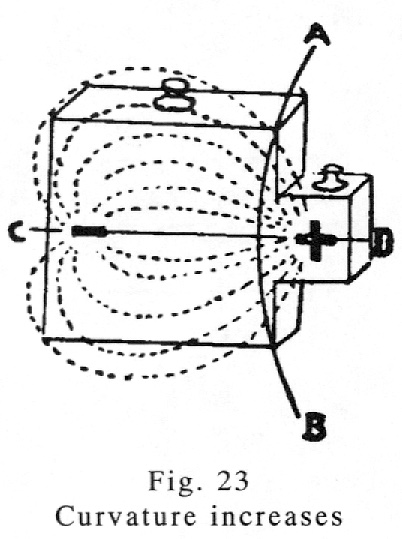 
Fig. 23 illustrates this principle which forms spheres and creates the illusion which makes heavy objects seem to be attracted radially toward the earth and tenuous matter thrust radially away from it. Line AB shows the curvature of the static equator which causes the dynamic equator to expand at its negative end and contract at its positive end into the radii of a cone. The outward thrust of radiative pressures would curve the base of the cone thus produced to correspond with the curvature of its static equator, AB. 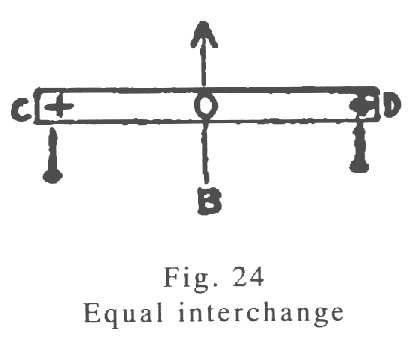 
Fig. 24 represents a bar magnet which has been divided into the two opposite pressure conditions of this electric universe by coiling a charged wire around the bar of steel, thus forming two opposed plus and minus electrical vortices with intensities measured at poles.

Two nails of equal weight are suspended to these poles. It is not magnetism, however, which picks up these nails. It is the electric vortices which pick them up, for the vortices are still effective upon that steel bar even though the electrically charged wire has been removed.

It is the whirlpool motion of the electric vortex which performs the work of lifting those nails and not the stillness of the poles of magnetic Light.


If the bar magnet is enlarged at one end it becomes a cone. The division into the two opposed conditions will still be equal, as in Fig. 25, but the volume will be so large in one as compared with the other that the nail which the positive end will still pick up cannot be lifted by the negative end unless the nail is ground to a fine powder. The negative end will then lift the same weight in total but only by dividing the nail over the whole volume. 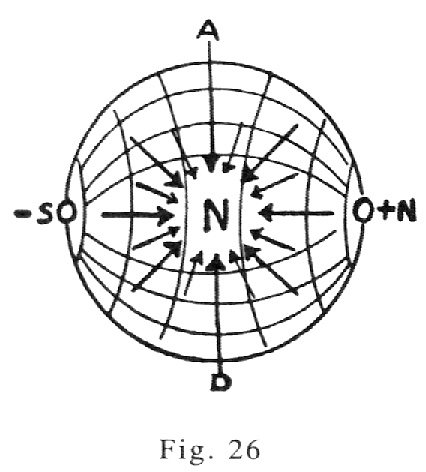 
Before this principle is applied to matter and space, it is necessary to correct the general impression that the earth is a magnet. By referring to the bar magnet pictured in Fig. 24 it can be seen that its poles alone express gravity. The earth, on the contrary, expresses gravity at its center. (Fig. 26) 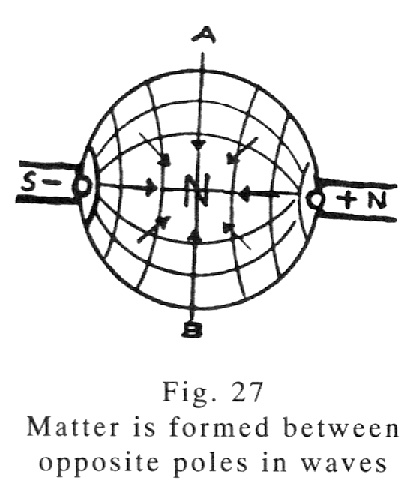 
The earth is formed between magnetic gaps of its wave as all bodies are formed (Fig. 27). If two bar magnets are placed so that negative and positive ends are near each other, that still point which we call the center of gravity will evidence itself between the two ends. If iron filings are placed in this gap, conditions of gravity similar to those of the earth will be found there.

Gravity will end and radiation will begin at that center. Nails will fall toward it from any direction, as heavy objects do on earth, and compass needles will follow the vortical directions of lines of force which extend toward its poles. 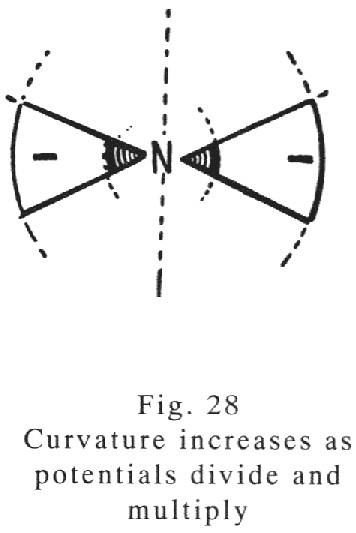 
The analogy between the unequal battery cells and bar magnets is now sufficiently complete to compare them with matter and space. In Fig. 28 two bar magnets have been fanned out into cones. The weight which the positive end will pick up as a solid has to be finely divided in order for the expanded volume of the negative end to pick it up.

The essential difference between the two opposed pressure conditions of the electric battery and the two of matter and space is that in the battery the opposed potentials are equal because the volumes are equal.

In the universal battery of matter and space the two opposed conditions are conspicuously unequal. The resultant high and low potential contrast each other so violently that solid matter "falling" toward the high potential of the compressed condition must be divided into vapors and gases before the same substance will "fall" toward the low potential of the expanded condition. A solid bar of iron will fall radially toward the earth because both are high potential compressed solids. If divided sufficiently by vaporizing it, that same bar of iron will fall radially toward the heavens.

The cause of the radial universe which constitutes matter and space lies in the inequality of its two opposite pressure conditions both as to volume and potential.

The cause of the universal pulse beat and the breathing which motivates the manifestation of life in every creating thing lies also in this inequality. All creating things pulse and breathe just as organic "life" pulses and breathes, but that is not life; it is but motion. [Walter Russell, The Secret of Light, pages, 232-238]