noun: three constituent or aliquot parts comprising a single whole or unit.
noun: a group of three people or things.
noun: the union of the Father and Son and Holy Ghost in one Godhead.

Bloomfield-Moore
"Science admits that nature works with dual force, though at rest she is a unit. "Nature is one eternal circle". Keely's discoveries prove that the doctrine of the Trinity should be set down as an established canon of science - the Trinity of force. All nature's sympathetic streams - cerebellic, gravital, electric and magnetic - are made up of triple currents. The ancients understood this dogma in a far deeper sense than modern theology has construed it. The great and universal Trinity of cause, motion and matter - or of will, thought, and manifestation - was known to the Rosicrucians as prima materia. Paracelsus states that each of these three is also the "other two; for, as nothing can possibly exist without cause, matter and energy - that is, spirit, matter and soul (the ultimate cause of existence being that it exists), we may therefore look upon all forms of activity as being the action of the universal or Divine will operating upon and through the ether, as the skilled artificer uses his tools to accomplish his designs; making the comparison in all reverence." [True Science]

Russell
"God, the One Knower, becomes three by His imagining. The still Light of the Knower, and the moving lights of His thinking, are the Trinity which God is in all things in this universe.

God, the One Father-Mother divides His sexlessness to extend 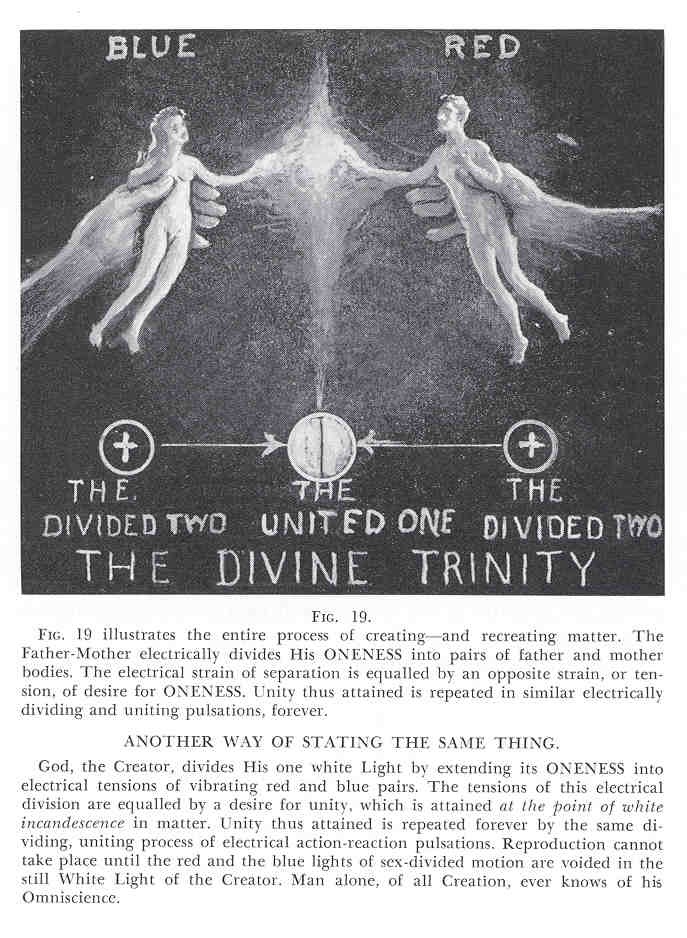 Fig. 19 illustrates the entire process of creating – and recreating matter. The Father-Mother electrically divides His ONENESS into pairs of father and mother bodies. The electrical strain of seperation is equalled by an opposite strain, or tension, of desire for ONENESS. Unity thus attained is repeated in similar electrically dividing and uniting pulsations, forever.

ANOTHER WAY OF STATING THE SAME THING
God, the Creator, divides His one white Light by extending its ONENESS into electrical tensions of vibrating red and blue pairs. The tensions of this electrical division are equalled by a desire for unity, which is attained at the point of white incandescense in matter. Unity thus attained is repeated forever by the same dividing, uniting process of electrical action-reaction pulsations. Reproduction cannot take place until the red and the blue lights of sex-divided motion are voided in the still White Light of the Creator. Man alone, of all Creation, ever knows of his Omniscience.

father and mother bodies from His Oneness. The one desire of these separated male and female particles, or masses, is to unite to void their separateness. Upon this formula God's electric universe of motion is founded.

The sexless Father-Mother Creator is One. His extended sex-conditioned, male and female bodies are the completion of His Trinity.

The swinging of the pendulum is three, as the spectrum and the fulcrum and lever, also, are three.

The cathode is one - but its extended pairs of anodes in the electric current of man, and of space, adds up to three.

Silence is one - but sound springs from silence when its divided moving pair collide - so sound is three, and its vibrations in sequences of rest and action, are also three.